Can CBD help lupus and other diseases?

A lupus diagnosis can be devastating. The disease causes the body’s immune system to attack its own tissues and can affect internal organs—including the brain, heart, and lungs—which can start to deteriorate. Lupus flare-ups can leave patients so fatigued and in pain that they’re unable to do the simplest of things, such as walk, cook, or read. Many can’t go outdoors without layers of sunscreen, because the disease can make them extremely susceptible to sunburn.

Lupus affects approximately 240,000 people in the United States, and yet at present doctors neither know the exact cause nor have a cure. Instead, current treatments focus on improving quality of life by controlling symptoms and minimizing flare-ups to reduce risk of organ damage.

“The landscape for treatment of lupus is a bit bleak,” says Fotios Koumpouras, MD, a rheumatologist and director of the Lupus Program at Yale Medicine. “A multitude of drugs have failed in the last ten to 15 years. Most of the drugs we use are being repurposed from other conditions and are not unique to lupus. Many of them can’t be used during pregnancy, which is a problem because lupus mostly affects young women. All of these issues create the impetus to find new and more effective therapies.”

This is why he’s exploring an unconventional candidate for a new lupus treatment option: CBD—one of the chemicals found in the marijuana plant. 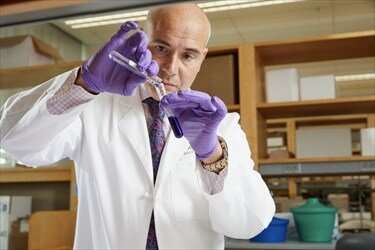 CBD is a form of cannabinoid called “cannabidiol.” Cannabinoids are a type of chemical that binds to (CB1 and CB2) receptors found throughout the body. CB1 receptors are mostly located in the nervous system, connective tissues, gonads, glands, and organs; CB2 receptors are primarily found in the immune system, along with the spleen, liver, heart, kidneys, bones, blood vessels, lymph cells, endocrine glands, and reproductive organs. (Collectively this is called the endocannabinoid system.)

What these cannabinoids do when they bind to the receptors depends on which receptor is activated, and thus can produce effects ranging from the firing of neurotransmitters (the chemical messengers sent from the brain to the rest of the body) that alter mood, to reducing inflammation and promoting digestion.

Our bodies produce cannabinoids, but they can also be found in nature, most abundantly in the marijuana plant. The two most well-known types of cannabinoids in the marijuana plant are THC (tetrahydrocannabinol) and CBD (cannabidiol). THC binds to both the CB1 and CB2 receptors and is responsible for many of the well-known psychoactive effects of marijuana, such as euphoria, increased heart rate, slower reaction times, and red eyes. CBD, on the other hand, binds only with CB2 receptors, resulting in the production of a series of proteins to reduce inflammation. (These proteins are called “resolvins” because they appear to resolve inflammation.)

This is what caught Dr. Koumpouras’ eye in his search for a new lupus medication. Reducing inflammation is crucial for patients with lupus because it is what causes the buildup of scar tissue in vital organs that can eventually lead to their deterioration and malfunction, he says. Unfortunately, none of the current lupus drugs available are uniformly effective.

In 2018, Dr. Koumpouras joined a multi-site randomized clinical trial that aims to recruit 100 participants to examine whether a drug using synthetically created CBD (called Lenabasum) can help ease pain and inflammation in patients with lupus. Participants will receive Lenabasum or a placebo for almost three months and will continue to be monitored for pain and inflammation levels, as well as lupus disease activity. The study is ongoing, but Dr. Koumpouras anticipates that it will wrap up by early next year.

From recreational drug to medicine

Dr. Koumpouras’ excitement over the new drug comes at a time when products containing CBD have flooded supermarkets, labeled with claims that they treat everything from back pain to insomnia. Although CBD is not yet approved by the FDA, the hype around it stems from the popularity of the marijuana plant it is derived from.

Marijuana has been both celebrated and shunned throughout its history in the U.S. Once targeted in the “war on drugs” campaign in the 1980s, marijuana began to gain some foothold of societal acceptance in the mid-1990s when California legalized it for medical use. Since then, claims that the plant can treat a wide range of medical issues, including inflammation, pain, and even epileptic seizures, are widely covered by news outlets (legitimate and otherwise). At present, 33 states, plus the District of Columbia, have decriminalized the drug for medicinal use.

Scientists and researchers are studying these claims. One large review of those studies was published in 2017, when the National Academies of Sciences, Engineering and Medicine released a report detailing the potential health effects of cannabis and cannabinoids. A committee of 16 experts from a variety of scientific and medical fields analyzed more than 10,000 scientific abstracts, determining there is “conclusive or substantial evidence” supporting the use of cannabis or cannabinoids for chronic pain in adults, multiple sclerosis-related stiffness and muscle spasms, as well as chemotherapy-induced nausea and vomiting. The researchers also found “moderate” evidence that cannabis or cannabinoids reduce sleep disturbances in people with obstructive sleep apnea, fibromyalgia, chronic pain, and multiple sclerosis. However, there are no randomized double-blind clinical trials proving marijuana’s effectiveness in patients.

Marijuana remains stigmatized as a recreational drug. That may be, in part, why CBD entrepreneurs position their products as containing an all-natural chemical with all the benefits of marijuana, but without the dissociative effects of THC—something that might be more easily accepted by the public.

But whether CBD actually provides those benefits in a significant way remains to be seen. Only a few studies—small ones—have definitively proven the effectiveness of CBD. To date, the only FDA-approved medication containing CBD is Epidiolex, a medication used to treat two rare forms of severe epilepsy—Lennox-Gastaut syndrome and Dravet syndrome, both which begin mostly in infancy and early childhood. In a group of three clinical trials, Epidiolex seemed to reduce the number of seizures significantly. And yet, Vinita Knight, MD, a Yale Medicine pediatric neurologist, says her patients who take Epidiolex have had mixed results. Some have had reductions in seizures and others haven’t shown much improvement. “We’re not seeing as much success as what’s been reported on Facebook and Twitter,” she says, but adds that so far it has only been prescribed for children with the most debilitating and difficult-to-treat seizures. In addition, some researchers believe that CBD works most effectively in combination with other cannabinoids and compounds found in the marijuana plant, in what is known as the “entourage effect.” Thus, it would be less effective as an isolated chemical in pill form, but that, too, remains unproven.