She may not have taken home a Grammy, but groundbreaking country star Mickey Guyton has something even better waiting for her at home: her 4-week-old son, Grayson. 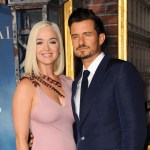 Katy Perry Sums Up Postpartum Life: 'I Couldn't Wipe My Own Butt' After Giving Birth

“Being a mom is probably one of the greatest things I will ever experience,” Guyton told People on Sunday night, when Guyton made history as the first Black female solo country music nominee.

Guyton may be rubbing elbows with music industry elite, but she said she has bigger things on her mind these days. “Literally he is all I think about. And he’s my reason. I’m doing all of this for him. I just want to make him proud,” Guyton said. “And to make this world easier for him as he grows up and becomes a young Black man. I’m just obsessed with him if you can’t tell, like really, really obsessed with him.”

After giving birth in February, Guyton said postpartum life was a shock. “People don’t really talk about those first two weeks after you’ve given birth. That was like, very, very surprising.”

She added, “You know birth, that is a very … that’s its own thing that I was very surprised how much your body changes and those moments, and what you go through.”

Guyton earned her Grammy nod for the autobiographical single “Black Like Me.” If she had won, she would’ve been the first Black woman to take home a country music Grammy since 1974 when the Pointer Sisters won for their single “Fairytale.”

Guyton’s Grammy appearance meant it was time for her husband, Grant Savoy, to step in and support her: “My husband took over baby duty the last three days to make sure I got a full seven hours of sleep [in preparation for her Grammy performance]. But I still wake up at 4 a.m. when I hear him whimper. I’m like, ‘Where is he?’ I just want to be near him,” she said.

Before you go, take a look at these books featuring girls of color.