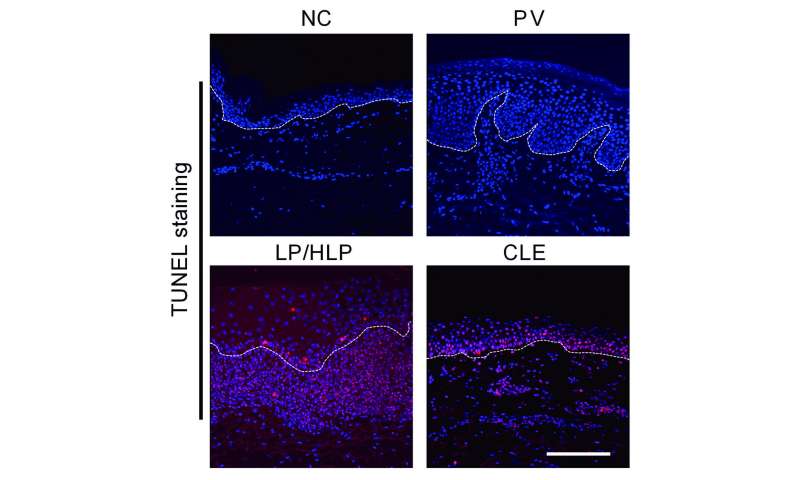 It’s often difficult to manage patients with this skin inflammation, but new research identifies a target that existing medications are able to address.

The inflammatory skin disease, most likely triggered by an underlying immune disorder, experts say, can also lead to significant scarring.

Although there have been few treatment options in the past, dermatologists at Michigan Medicine have recently discovered more about how lichen planus develops. Their findings, published in Science Translational Medicine, suggest an arthritis drug could be used to treat the rash in the future.

“We found the pathway behind the immune response that sparks lichen planus, which has a marked impact on quality of life,” says senior author Johann E. Gudjonsson, M.D., an associate professor of dermatology at U-M. Gudjonsson is also director of U-M’s new Skin Biology and Diseases Resource-based Center, funded by the National Institutes of Health.

But because not much is known yet about the pathogenesis of lichen planus, Gudjonsson notes comparison against other inflammatory diseases is lacking.

Gudjonsson explains why improving care for lichen planus has proven difficult, and how his team is paving the path toward future treatments.

Why do you call lichen planus a diagnosis with a major effect on quality of life?

Gudjonsson: Lichen planus is a disease with many different clinical forms and often variable appearance and can involve the skin, hair, nails and mucosal areas of the mouth and genitals. It affects around 1% of the general population.

On the skin it can leave behind irregular dark patches, loss of hair and loss or permanent scarring of nails. In the vaginal areas and mouth it can cause painful sores, and many people are unable to properly eat. Over time, the lesions in the mouth and genitalia can lead to significant scarring.

In addition, lichen planus is associated with increased risk of cancer in longstanding lesions, a devastating complication of this disease.

Why has it been difficult to find viable treatment options for lichen planus?

Gudjonsson: I believe that the major reason for this is that the disease hasn’t been much studied and markedly lags behind other skin diseases in terms of resources that have been devoted for research. That’s also why there have been no major clinical trials to identify treatments for this disease, and most of the treatments currently used to treat lichen planus are “borrowed” from other disease fields.

How did you identify a potential future treatment for lichen planus in your new research publication?

Gudjonsson: We used tissue samples from about 40 patients with an established diagnosis of lichen planus to identify the key inflammatory pathways involved. We then showed in a skin model system that the disease is primarily mediated by an inflammatory mediator called interferon-gamma and signals through a specific inflammatory signaling pathway that utilizes the signaling molecules JAK2, and STAT1.

As there are existing treatments currently approved for arthritis that target this same pathway, we provide some evidence in our skin model system that drugs targeting this pathway are likely to be effective in lichen planus.

What further research is needed?