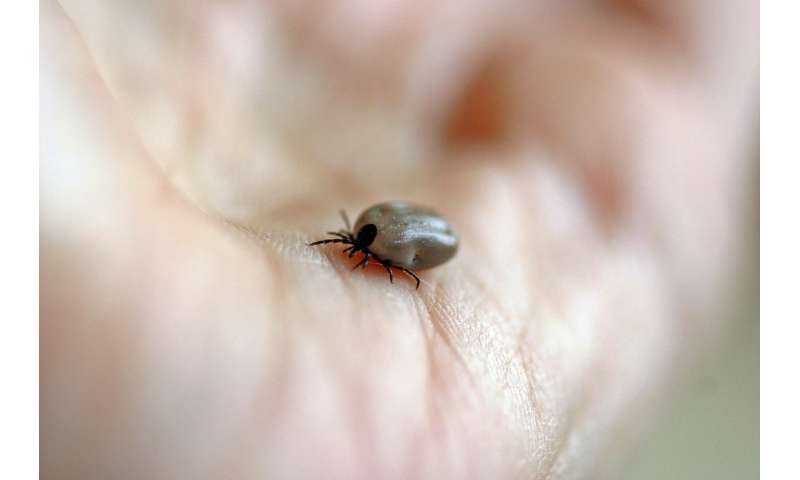 Connecticut researchers are involved in a new and potentially important effort to break the cycle of infections among wild animals and ticks that leads to the transmission of Lyme disease to humans.

The key is finding a way to give a specially developed vaccine to white-footed or deer mice, carriers that are one of the major ways that Lyme disease bacteria get into the ticks that eventually infect humans.

Scientists at the Connecticut Agricultural Experiment Station recently finished a three-year study that provided vaccine-coated food pellets to mice in the backyards of 32 homes in Redding.

In a recently published paper on the study, researchers reported a 26% drop in the number of Lyme disease-infected white-footed mice trapped at those Redding homes. Fewer infected mice means fewer infections in the ticks that bite them and then later go on to bite humans.

The intent of the Redding field trial was to “target the rodent reservoir (of Lyme disease bacteria) to reduce tick infections,” said Scott Williams, an agricultural scientist at the experiment station and one of the co-authors of the paper.

Stafford also said that repeated applications of the vaccine to generations of wild mice would result in even greater long-term reductions in the incidence of ticks carrying Lyme disease bacteria. He said the “decrease would be greater year-over-year that the vaccine is applied.”

“I agree with that,” said Jolieke van Oosterwijk, chief scientist at US Biologic, the Memphis, Tenn.-based research company that developed the vaccine pellets and paid for the Connecticut field trial. “Every year (of application of the vaccine in an area) will have an added effect,” van Oosterwijk said.

She called the results from the Connecticut field trial “very encouraging numbers.”

US Biologic is now seeking regulatory approval to sell these anti-Lyme disease mouse-food pellets to the general public, but company officials declined to speculate as to when those approvals might come.

“We’re rapidly moving through the process,” said US Biologic’s executive vice president, Chris Przybyszewski, who was also a co-author of the published scientific paper on the Redding study. “We’re really looking forward to marketing this and making it available to folks.”

But there remain numerous questions about this approach to the fight against Lyme disease, which the U.S. Centers for Disease Control and Prevention lists as the most common illness transmitted by ticks, mosquitoes or fleas in the United States. Federal officials estimate that 329,000 U.S. citizens contract the disease each year.

White-footed mice, while the most common way the Lyme disease bacteria are transmitted to ticks, is only one of the creatures that does so. Shrews, chipmunks and birds can also carry the bacteria and give it to ticks that bite them.

Lots of people associate the blacklegged or deer tick that transmits Lyme disease to people with the presence of white-tail deer, and that’s not completely wrong. But deer don’t act as carriers of the Lyme disease bacteria, experts say.

The ticks are infected with the bacteria when they bite white-footed mice, other small rodents or birds. In order for a female tick to reproduce, she needs a large “blood meal” and can get it most easily from deer if there are a lot of them around.

So it’s the combination of large numbers of wild mice and large populations of deer that lead to high numbers of Lyme disease-transmitting ticks.

“If you have lots of deer, lots of ticks and lots of mice, you have a problem,” said Williams, “which is what Connecticut has.”

Another issue is that, to be effective in curtailing Lyme disease infections, it’s likely the mouse vaccine pellets would have to be spread over very wide areas, and how effective that might be still hasn’t been determined.

Williams said the next step in the research program would be to do an entire neighborhood “to see if you could affect a larger area. … You’re looking at something to have a regional effect.”

Cost could be another limiting factor if large quantities of these vaccine pellets would need to be spread over wide areas. US Biologic officials declined to discuss how much the pellets might sell for until the regulatory process concludes.

“The goal here is to make this accessible,” Przybyszewski said.

The mouse vaccine was originally developed by Maria Gomes-Solecki, an immunologist and associate professor at the University of Tennessee’s Health Science Center. US Biologic’s project is to use that vaccine in food pellets that could be widely used without the kind of controversy linked to human vaccines.

This isn’t the first time an anti-Lyme disease vaccine has been developed. In 1998, a human vaccine was introduced that scientists said was proven safe and effective after three applications.