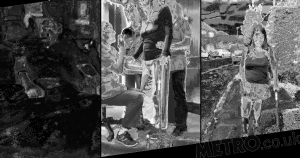 Stevie Carver was having a bad day. It was the second shift of a new job and her car wouldn’t start, so she got a lift from her partner.

She had no idea that that decision would save her life, as it meant he also had to pick her up that evening.

On her way home from work on 12 February 2018, she suffered a stroke and was left fighting for her life.

Her family were told she had a 2% chance of survival and she was placed in an induced coma.

After over a week, she came round, but she had no idea where she was and she had lost 20 years of her life.

The 38-year-old, from Norfolk, tells Metro.co.uk: ‘I thought it was 1998, I had been kidnapped and I was being held hostage. I had no idea what was going on. It meant I wasn’t very cooperative.

‘I was hallucinating and was sure I was being experimented on. I recognised my daughter but I was shouting at my son saying, “You’re not my son, I don’t know you.”‘

Stevie had been born with an arteriovenous malformation, which means an artery and vein are not connected properly.

Over time, this had weakened and eventually it burst, causing a brain haemorrhage and a stroke.

She had no idea she had this as she had never had any scans of her head and they are rare, affecting around 1% of the population.

The first sign that something was wrong was when she got into the car with her partner (at that time, they have since separated) that night when he came to pick her up.

She had a sudden and severe stabbing pain in her head, which she says was unlike anything she had ever experienced before.

She explains: ‘I just started screaming because it was so painful and my then-partner didn’t understand what was going on.

‘We got home and he told me to stay there while he opened the door but I tried to get out and just collapsed on the ground. That’s the last thing I remember.’

Her partner called an ambulance and she was rushed to hospital, but a scan showed the damage in her bran and she was immediately moved to a specialist neurology ward at Addenbrookes hospital, where she underwent emergency  brain surgery.

Although the operation was a success, she was placed in an induced coma for the first week, and it took them a week to make her stable enough to bring her round.

Eventually, when she woke up, they realised that the stroke had had a huge impact on her memory, as well as physically.

She says: ‘It was terrifying and I couldn’t understand what had happened.

‘I was a very difficult patient. I was given thickened liquids because I couldn’t swallow properly. I’d worked in a nursing home and had seen those being given to people with dementia so I would refuse them.

‘I was like that for a couple of weeks and slowly things started to come back but my memory was impacted for a long time. I would ask the same thing over and over again. My family were very patient and would just keep telling me the answers and I think things slowly started to go in.’

Stevie had a long stay in hospital and suffered weakness down the right hand side of her body. One of the things she struggled with was being one of the youngest people on the ward.

‘When people think of strokes, they associate them with older people. Before this happened to me, that’s what I thought too. But it can happen to younger people, as this shows. It was quite isolating to be around people who were much older than me in hospital,’ she says.

She spent three months doing physio to learn how to walk, talk and read again and being away from her children made her mental health suffer.

She explains: ‘I was meant to go to a rehab facility but I missed my children so much and we agreed that it was making it worse. I have a fantastic team who helped me go home and agreed to coming to do physio with me every day. That meant a lot.’

Now over two years on, Stevie is still impacted by her stroke. She has not been able to return to work and still has weakness, though it has improved and she is continuing with physio. She still struggles with her memory, fatigue and other cognitive functions.

She is using her time to volunteer and raise awareness for the Stroke Association.

She explains: ‘I will be working as a volunteer for the telephone counselling service and before covid, I was hoping to become a volunteer on the ward where I stayed but that is obviously delayed at the minute.’

Stevie is also raising money for the charity after walking a marathon distance of 26.2 miles in two weeks and she is taking part in their Hope After Stroke campaign, which highlights the importance that hope plays in people’s recovery.

According to a survey of 1,000 by the Stroke Association, more than four out of five (85%) stroke survivors have reported being told that their recoveries would be limited to within the first year after their stroke.

By sharing stories like Stevie’s, the Stroke Association hopes to dispel some of the myths around recovery and help survivors rebuild hope.

You can donate to Stevie’s Justgiving page here or to the Hope After Stroke campaign here.