What is Dehydration Synthesis? 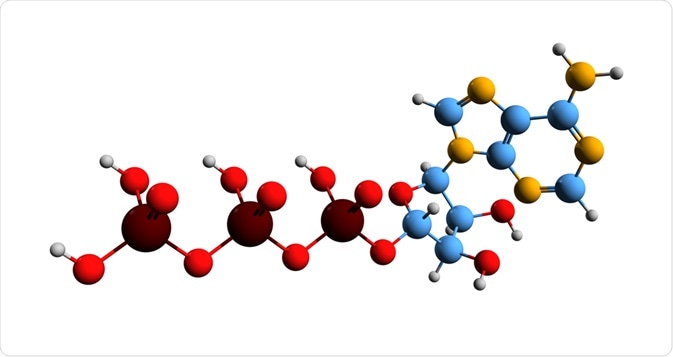 How does dehydration synthesis contribute to the formation of ATP?

ATP synthase is an enzyme that adds a phosphate group to ADP to form ATP. This is found in the inner membrane of the mitochondria and acts with four other protein complexes. This process is generally referred to as “oxidative phosphorylation” and the protein complexes form the respiratory chain.

The last complex in the respiratory chain, complex IV, is also called cytochrome c oxidase. A component of this complex, cytochrome c, is a small protein that acts as a shuttle for electrons between complex III and complex IV. Once in complex IV, these electrons accumulate in its copper centers, and by the use of heme groups, they are moved to oxygen. Here, the dehydration synthesis reaction to form ATP begins; the electrons lead to the reduction of oxygen, which in turn leads to the formation of water.

The transfer of electrons through the respiratory chain causes hydrogen ions, or protons, to be moved across to the intermembrane space of the mitochondria. This serves to create a difference in electrical potential across the inner mitochondrial membrane, which in turn creates a proton motive force that powers the ATP synthase.

Here, the dehydration synthesis of ATP which began with the reduction of oxygen to water by complex IV is completed, by the addition of a phosphate group to ADP to form ATP.

How does dehydration synthesis lead to the formation of carbohydrate polymers?

Carbohydrates are made of sugar molecules, including glucose, fructose, and arabinose. These sugar molecules, or monomers, can be combined to form dimers such as sucrose or lactose, polymers such as starch or cellulose, or be added to other molecules to form glycosides. This occurs through a dehydration synthesis reaction.

Some carbohydrate polymers, such as cellulose, are not easily digested by humans and instead are fermented by our gut bacteria. This fermentation process mainly releases short-chain fatty acids, which have been shown to enhance the absorption of water and salt in the colon, as well as providing us with energy that would otherwise have been inaccessible to humans. Some plant glycosides have pharmaceutical properties, including anti-inflammatory, anti-microbial, and anti-coagulant.

How are triglycerides formed by dehydration synthesis?

Triglycerides, or triacylglycerols, are important molecules for storing energy and are much more energy-dense compared to carbohydrates. They are formed when three fatty acids molecules attach to a glycerol molecule, by esterification. This esterification process is a dehydration synthesis reaction, where the fatty acids react with the alcohol groups on the glycerol molecule to form an ester bond with the release of water.

While triglycerides are essential molecules, it has been shown that an excess of triglycerides can lead to obesity, and if this occurs outside of adipose tissue this can also lead to insulin resistance.

Various enzymes catalyze the dehydration synthesis of triglycerides, one being Acyl-CoA: diacylglycerol acyltransferase 1 (DGAT1); this enzymatic reaction is the last in mammalian triglyceride synthesis. Researchers had noticed that mice that were deficient in DGAT1 did not become obese, were more sensitive to insulin and leptin compared to wild-type mice, and showed no evidence of diet-induced hepatic steatosis.

More specifically, DGAT1 deficient mice showed somewhat reduced levels of triglycerides in tissues. As there are similarities in the expression pattern and function of DGAT1 in mice and humans, does this mean that DGAT1 can be used as a target to treat obesity?

Certainly, studies on mice suggest that DGAT1 is a suitable target for small-molecule inhibitors, and some natural products have been shown in vitro to inhibit DGAT1. However, caution should be taken as knocking out the DGAT1 gene and inhibiting the resulting enzyme may produce different results altogether.

Dr. Maho Yokoyama is a researcher and science writer. She was awarded her Ph.D. from the University of Bath, UK, following a thesis in the field of Microbiology, where she applied functional genomics toStaphylococcus aureus . During her doctoral studies, Maho collaborated with other academics on several papers and even published some of her own work in peer-reviewed scientific journals. She also presented her work at academic conferences around the world.