‘We Were Flying Blind’: A Dr.’s Account of a Woman’s J.&J. Vaccine-Related Blood Clot Case

The disorder is rare, but so severe that the vaccine is on hold while experts weigh the risks and alert doctors and patients about symptoms and treatment. 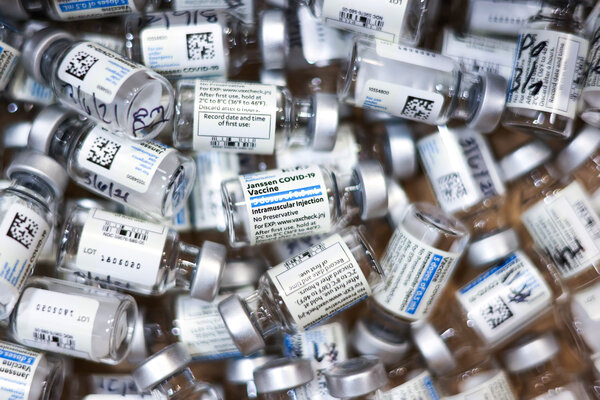 An 18-year-old woman was stricken with severe headaches, vomiting, seizures, confusion and weakness in one arm early this month, strokelike symptoms that doctors at a Nevada hospital were shocked to see in someone so young.

Scans found several large blood clots blocking veins that drain blood from the brain, a condition that can disable or kill a patient.

Doctors performed a procedure to suction huge clots from her brain, only to find that new ones had formed.

The patient is one of six women ages 18 to 48 who developed clots in the brain within two weeks of receiving the Johnson & Johnson coronavirus vaccine. One died, and their devastating cases led U.S. health officials to recommend on Tuesday that use of the vaccine be paused.

Two more cases have been added since then: one involving a man who was vaccinated during the company’s clinical trials and another involving a woman who received the vaccine after it had been authorized for general use.

As in several of the original cases, the young woman in Nevada was initially treated with heparin, a standard blood-thinner that experts have since learned may actually worsen the rare clotting disorder that has affected small numbers of people who received the Johnson & Johnson or AstraZeneca vaccines in several countries. But until the last few weeks, doctors around the world had little information about the condition, and the doctors in Nevada did not recognize it immediately.

“We were flying blind, based on reports from Europe and the U.K. hematological society,” said Dr. Brian Lipman, an infectious-disease specialist who helped care for the Nevada patient at Dignity Health St. Rose Dominican Hospital, Siena Campus, in Henderson.

The U.S. decision to call for suspension of the use of the vaccine was intended to give officials time to learn more about the rare disorder causing the clots, to assess whether it is linked to the vaccine and to inform doctors and patients about how to recognize symptoms and treat the condition.

The pause may last until at least next Friday, when expert advisers to the Centers for Disease Control and Prevention are scheduled to meet to review the data and decide whether to resume using the vaccine. Dr. Rochelle Walensky, the director of the C.D.C., and other top U.S. health officials sought on Friday to reassure the public that the pause, now extended more than a week, was a reasonable safeguard to assess risk. They also emphasized that over all, the Johnson & Johnson vaccine and the other vaccines in use in the United States were safe, given how many millions of Americans had gotten their shots without concern.

But with the world staggered by a relentless epidemic, even temporarily stopping the use of a highly effective vaccine, which many countries had planned to deploy, is a fraught decision. Public health experts fear that the move sends a message that will erode trust globally even if the vaccine is reinstated and that huge numbers of people who could have been immunized will die needlessly from Covid-19 because they or their governments rejected the company’s vaccine.