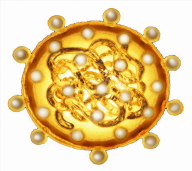 Scientists from Trinity University have discovered how the Hepatitis C virus manages to “hide itself” and remain undiagnosed for some time after the infection.

The discovery explains the often late detection of the infection with the virus and could potentially lead to the development of more potent drugs against the virus.

Hepatitis C is highly infectious and sometimes even deadly. About 180 million people worldwide are infected. In Ireland about 1.5pc of the population are carrying the virus.

Nigel Stevenson, Assistant Professor in Immunology at Trinity, described the effect of Hepatitis C on the body:

“The virus is mostly replicating in the liver. You have mild inflammation symptoms and the liver tries to repair itself and that causes fibrotic scarring of the liver.”

The scarring results in reduced liver function which leads to a build-up in toxins and often jaundice.

Dr Stevenson describes the difficulty in detecting the virus: “When you have the flu you know because your body reacts strongly. When you have Hepatitis C, you have no idea that you would have a potentially deadly virus.

“Nobody understood why the body did not trigger the usual inflammatory response that would have hinted towards an infection,” he added.

By triggering this reaction, the virus prevents the body from fighting an infection in its usual way and manages to stay undetected while replicating in the liver.

He added: “This ability shields HCV from our body’s normal, effective anti-viral immune response and creates a perfect environment in which to survive, replicate and infect other cells.”

Dr Stevenson and his team now hope that their findings could be used to battle both Hepatitis C and similar viruses.

“At the very least, it might make other researches look at their viruses and ask similar questions, like ‘can this virus maybe do the same?’”

“Potentially, we are hoping for a future development of drugs that keeps hepatitis C from inhibiting the immune system. It would allow the natural immune system to be able to work better against the virus,” Dr Stevenson added.