This Addiction Treatment Works. Why Is It So Underused?

PHILADELPHIA — Steven Kelty had been addicted to crack cocaine for 32 years when he tried a different kind of treatment last year, one so basic in concept that he was skeptical.

He would come to a clinic twice a week to provide a urine sample, and if it was free of drugs, he would get to draw a slip of paper out of a fishbowl. Half contained encouraging messages — typically, “Good job!” — but the other half were vouchers for prizes worth between $1 and $100.

“I’ve been to a lot of rehabs, and there were no incentives except for the idea of being clean after you finished,” said Mr. Kelty, 61, of Winfield, Pa. “Some of us need something to motivate us — even if it’s a small thing — to live a better life.”

The treatment is called contingency management, because the rewards are contingent on staying abstinent. A number of clinical trials have found it highly effective in getting people addicted to stimulants like cocaine and methamphetamine to stay in treatment and to stop using the drugs. But outside the research arena and the Department of Veterans Affairs, where Mr. Kelty is a patient, it is nearly impossible to find programs that offer such treatment — even as overdose deaths involving meth, in particular, have soared. There were more than 16,500 such deaths last year, according to preliminary data, more than twice as many as in 2016.

Early data suggests that overdoses have increased even more during the coronavirus pandemic, which has forced most treatment programs to move online.

Researchers say that one of the biggest obstacles to contingency management is a moral objection to the idea of rewarding someone for staying off drugs. That is one reason publicly funded programs like Medicaid, which provides health coverage for the poor, do not cover the treatment.

Some treatment providers are also wary of giving prizes that they say patients could sell or trade for drugs. Greg Delaney, a pastor and the outreach coordinator at Woodhaven, a residential treatment center in Ohio, said, “Until you’re at the point where you can say, ‘I can make a good decision with this $50,’ it’s counterproductive.” 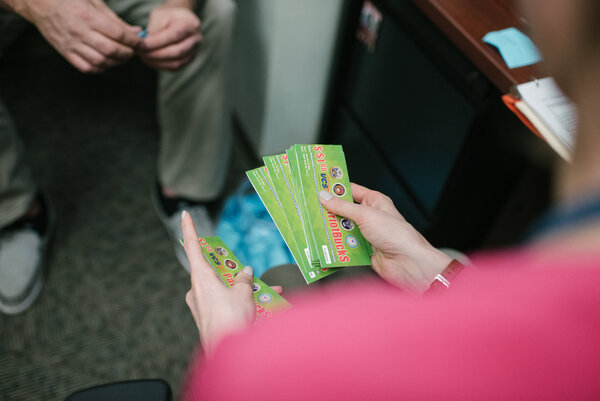 Two medications used to treat opioid addiction, methadone and buprenorphine, have often been viewed with similar suspicion because they are opioids themselves, even though there is abundant research showing they substantially reduce the risk of death and help people stay in treatment. But the federal government has started aggressively promoting such treatment for opioid addiction, and has heavily invested in expanding access to it.

As of yet, there are no medicines proven to suppress the intense cravings that come with addiction to meth and cocaine. Instead, there are a raft of behavioral interventions, some of which have very little evidence of effectiveness.

“The most common treatment is to do whatever the hell you feel like,” said Michael McDonell, an associate professor at Washington State University who has conducted a number of studies on contingency management. “We had two statewide meetings about meth recently, and at one, a colleague said, ‘Why aren’t we just doing contingency management? Why would we spend all this money on interventions that won’t work?’”

The fact that no public or private insurer will pay for contingency management, except in a few pilot programs, is a major challenge to expanding it; the biggest obstacle is that offering motivational rewards to patients has been interpreted as violating the federal anti-kickback statute. A group of treatment experts recently asked the Department of Health and Human Services to waive the statute for two years as it pertains to contingency management, but the agency refused, saying programs that provide rewards need to be evaluated on a case-by-case basis.

Congress recently told states that they could start spending federal “opioid response” grants on treatment for stimulant addiction, but the agency that distributes the grants allows only $75 per patient, per year to be spent on contingency management — far less than what research has found effective.

“The biggest question is how do we get the payers on board with this,” said Eric Gastfriend, the chief executive of DynamiCare Health, a technology company in Boston that has worked with BrightView and other treatment programs to provide contingency management through a phone app that patients can use to share saliva test results with providers in real time, via video. For rewards, patients can earn up to $600 over the course of a year through DynamiCare, on a debit card that blocks cash withdrawals and purchases at liquor stores and bars based on merchant category codes.

“I was hesitant to try it — like, hey, is this legal?” said Dr. Shawn Ryan, the chief medical officer and president of BrightView Health, an addiction treatment provider with locations throughout Ohio, which started using contingency management last year. But the results have been striking, he said, adding, “I’m talking about significant improvements in attendance to therapy sessions, significant reductions in drug and alcohol use.”

Rewarding people for changing a behavior or adopting a new habit is a familiar concept, used by everyone from parents who are trying to get their children to do chores to companies that are trying to get their employees to stop smoking. Research has found it also helps people who are addicted to opioids, but for them, there are other treatments that are equally or more effective. For addiction to stimulants like meth and cocaine, however, contingency management has the best outcomes — especially when combined with therapy that helps people find healthier ways to meet their social and emotional needs than using drugs.

A 2018 meta-analysis of 50 clinical studies of interventions for cocaine and amphetamine addiction, for example, found contingency management combined with an intervention called the community reinforcement approach was the most effective.

Federal officials say that they want to expand access to contingency management for stimulant addiction, but that finding an effective medication for it would be better.

“If we were paying for it, that would help,” Dr. Nora Volkow, the director of the National Institute on Drug Abuse, said of contingency management for meth addiction. “But we badly need medications to help strengthen the response to behavioral interventions. This is a highly, highly addictive drug.”

One patient at BrightView Health, Jodi Waxler-Malloy, 47, of Toledo, tried contingency management treatment after participating in more than a dozen treatment programs for cocaine, heroin and meth addiction since starting to use drugs in her early 20s.

BrightView restarted her on buprenorphine for her heroin addiction and set her up with the DynamiCare app and debit card as an incentive to stay off meth. DynamiCare would add between $1 and $25 to her debit card whenever she went to BrightView for a doctor appointment or therapy, though she never knew the amount ahead of time.

Ms. Waxler-Malloy said the monetary rewards helped her get through the first month of sobriety in particular, a period when her housing was precarious, her cravings were intense and she needed to save whatever money she earned waitressing for rent at a sober living house that she was waiting to move into.

“It was enough to buy cigarettes or grab something to eat,” she said. “Maybe I was going to the appointments and meetings for the wrong reason at that time, but it helped me in the long run — helped me meet people, have a support group.”

Contingency management has been used the most by the Department of Veterans Affairs, where 110 clinics and hospitals have employed it since 2011 to try to help more than 5,100 veterans stay off drugs.

Dominick DePhilippis, a licensed clinical psychologist who oversees the program at the department, said he had seen new interest in the approach outside the department as meth addiction has surged again over the past few years. He published a paper in 2018 that found that, on average, patients in the department’s contingency management program attended more than half of their scheduled sessions, and that the average percent of urine samples that tested negative for the target drug was 91.1.

“It’s not a panacea — not all patients respond to contingency management,” Dr. DePhilippis said. “But I think of it as a scaffolding. We can’t provide this reinforcement indefinitely, but for a sufficient amount of time that the patient will begin to experience the naturally occurring benefits of recovery.”

For rewards, the department’s treatment programs give vouchers for $1, $20 or $100 donated by the Veterans Canteen Service, which runs cafeterias, coffee shops and retail stores in many of the department’s medical centers. Patients receive an average $200 in coupons over 12 weeks, which they can spend only in those outlets. For now, these programs are suspended at most of the department’s centers because of the pandemic; at those that have resumed, Dr. DePhilippis said, a clinician can make prize draws from the fishbowl on the patients’ behalf.

“In the drawings, I did pretty good,” said Eric Alick, 63, of Philadelphia, who completed a contingency management program for cocaine addition at the Corporal Michael J. Crescenz V.A. Medical Center in Pennsylvania. “I might get three ‘good jobs’ in a row, but then, bingo.”

Among the things he bought with his rewards were a new drill set for his job as a handyman, perfume for his wife and coffee and meals for homeless veterans whom he had met in the hospital cafeteria.

One problem with contingency management, evidence suggests, is that people have less success staying abstinent after the treatment ends. For that reason, Richard Rawson, a researcher at the University of Vermont who has studied meth addiction for decades, believes it should be used indefinitely, just as medications for opioid addiction often are.

“Unfortunately, addiction is a chronic brain disease and treatments need to be designed to accommodate this reality,” he said.

For Ms. Waxler-Malloy, losing the debit card when her four months of contingency management ended in early January was hard, although her therapy sessions and 12-step meetings helped. Then, in May, she lost her waitressing job because of the pandemic and she relapsed, using meth and heroin “full force,” she said, for three weeks before stopping with help from Brightview.

Still, the eight months she went without using drugs was her longest stretch of abstinence in more than two decades. She believes she may not have relapsed if contingency management, with its promise of rewards, had still been part of her treatment regimen.

“That kept me real accountable,” she said recently. “Even just to stop at McDonald’s when you have that little bit of extra money, to get a hamburger and a fries when you’re hungry. That was really big to me.”