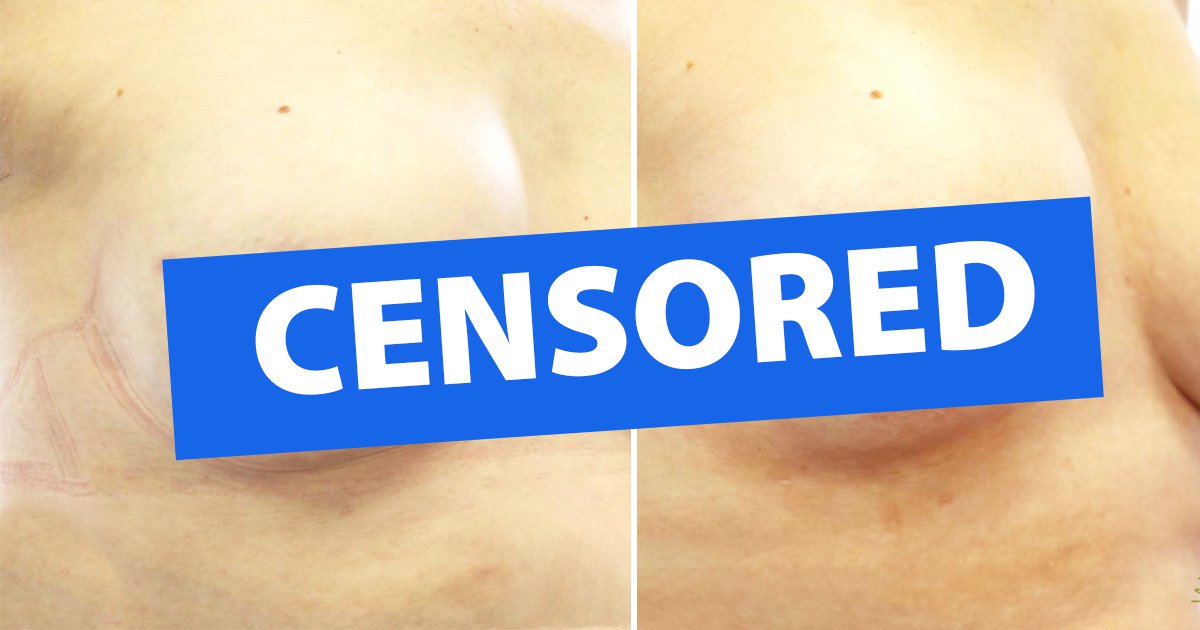 Some people struggle with their mental health while others find it hard to cope with the physical impact that treatment has on their body.

So the beauticians that offer 3D nipple tattooing – medical tattoos that create the look of a nipple after breast surgery – can profoundly help some learn to feel comfortable in their skin.

However, breast cancer survivors can struggle to find life-changing information about these services on social media. Facebook’s anti-nudity filters can mistake photos of 3D nipple tattoos for sexual content and censor it.

Helen Aldous, who provides 3D nipple tattoos, tells Metro.co.uk that restriction of her images has been a real problem.

‘The last time I was banned from Facebook for 30 days,’ she says.

‘This happened even though I had successfully appealed for my photo to be reinstated.

‘Facebook restored the image and said it wasn’t against their guidelines but then, every time someone shared it again it got flagged, and my account was shut down for 30 days.

‘I couldn’t appeal and it was impossible to reach anyone to get it sorted out.

‘So I was off Facebook for a month and unable to help my ladies. I also received a message that said my account would be shut permanently if I continued to “break community guidelines”.

‘I stopped posting images of my work after that.’

Sophia Wyatt also provides the 3D nipple tattoo service. Along with others, who are part of World Medical Artists, she plans to protest outside Facebook’s London HQ on September 1.

Though she agrees that Facebook is getting better at lifting restrictions on accounts that offer the service (including her own), she believes that men and women who have 3D nipple tattoos should also be able to share their pictures online.

She says if professionals like herself cannot speak with Facebook to find a technical solution, there will be subsequent protests in Australia, New Zealand and America.

Both survivors and tattooists tell us that breast cancer survivors are being censored from sharing images of themselves, even in private Facebook support groups.

Julia Green was diagnosed with breast cancer three and a half years ago. She knows of two women who had their accounts blocked in private forums. Though their accounts were reinstated once they took the images down, she thinks it’s a shame that photos can only be shared via private message.

‘I know some people think it’s just cosmetic, but it’s not,’ Julia explains. ‘Breast cancer is bad enough anyway, but it also devastates your body.

‘Some people don’t know about what’s out there, and we desperately need that information. If you can’t find it, you can’t make good decisions.’

After a gruelling journey which included a mastectomy, radiotherapy, chemotherapy, using a prosthetic breast before having her breast reconstructed using natural tissue from her stomach, the construction of a nipple and a reduction to help her breasts look equal, Julia says her 3D nipple tattoo was ‘amazing’ and helped her feel normal again.

Tracie Giles, who has provided the service for several women, confirms that the effects can be profound.

‘This treatment is often the final step in a client’s recovery from breast cancer and is totally transformative – not just transforming their appearance, but also their confidence,’ she explains.

‘Having a mastectomy, combined with other side effects of breast cancer treatments such as hair loss from chemotherapy, can seriously damage self-confidence.

‘Many women feel they have lost part of themselves or part of what makes them feel feminine, preventing them from fully moving forwards with their lives.

‘This treatment helps them to get that part of them back, restoring not only their nipple and areola but their confidence and femininity as well.’

‘We applaud the incredible work medical tattooists do to support breast cancer survivors, and know our apps play an important role in helping these communities connect.

‘By design, these tattoos often look extremely realistic, which means our technology – and even our content reviewers – can’t always spot the difference.

‘We really do appreciate how frustrating this can be, which is why we work to restore this content as quickly as possible, and why we’re continuing to explore ways to better recognise areola tattoos.

‘We encourage people to make it clear when posting that the image is a tattoo, to help avoid this content being mistakenly removed.’