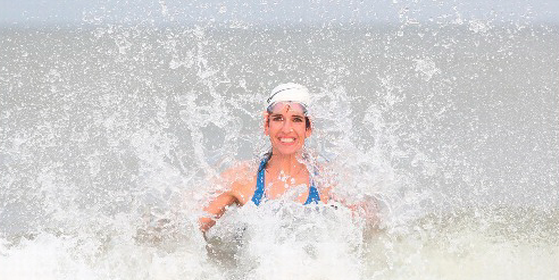 The sand is cold underfoot. I look out to sea. It’s flat and calm, but the chill in the air runs through my body. I know the water is going to be cold. I brace myself and wade in.

I breathe deeply. The water is biting cold. It feels like something sharp. I try to keep my breaths long – immersion in cold water makes the breath come short and fast. When I’m all in, the cold is all I can think about. It’s consumed me whole. There’s no room for any other thoughts.

I stretch out. I smell the ocean. My arms reach long, pulling through the greeny-blue water. My face hurts with the cold. I can feel my heart pumping hard. I focus on the stroke. I kick, but don’t really feel my feet.

In the depths of winter, I won’t stay in long. Sea temperatures in Ireland will drop from the high teens in summer to 6°C in January/February. In winter, I’ll do a few strokes out and a few more to make it back in. The body tires quickly in cold water, so you don’t want to stay in too long. Some people say you can condition your body to cold. But I don’t know – it always feels shocking to me.

So why do it? Why put your body through the ringer of plunging it into cold water? Walkers on the beach look incredulous when I strip down to my bathing suit. Their eyes say: “You’re not seriously going in there”. Some may actually question my sanity.

But the truth is there’s nothing quite like the feeling of being in the sea. That jolt of pure adrenaline when you plunge in, the fight or flight reflexes kicking in, the rush of feeling more alive than you’ve done all day. It’s like nothing else.

Living close to the sea, I set myself a challenge when I moved back to Donegal – where I grew up – to swim all year round. We know getting out in nature is good for us. So good for us that doctors in Scotland are even prescribing it. There can be no more total immersion in nature than getting into the sea.

There’s something about going for a swim that makes your problems shrink. I have often gone for a swim with things on my mind that I can’t seem to shake. It never ceases to amaze me that when I come out they somehow seem to occupy less headspace.

This happens to me regularly and while I’m no psychologist I can only put it down to the fact that getting into deep, cold water makes you prioritise only what you are doing in that moment. It is in fact the ultimate form of mindfulness. You only have space to focus on your breath. For a few minutes you are consumed with the task at hand.

Being in water also has the effect of making your problems seem smaller. You’ve no idea what’s in there with you. You look out to sea at the vastness all around you and realise that you are a tiny speck in a huge, swirling ocean. For me that puts things into perspective. While that may not be a comforting thought for everyone, it is for me.

When I first started open water swimming or wild swimming, as some people like to call it, I spoke to a friend who has taken on many swimming challenges about getting over a fear of what might be in there with you. His advice was that it’s a privilege to enter a space with wild creatures and how different our planet would be if they weren’t there.

Some days I have seen dolphins in the distance. There is always a lone seal at Shroove Beach in Inishowen where I swim regularly. He never gets too close, which I’m happy about. But for a few minutes it feels wonderful to share his world.

For years sea swimming has been associated with health benefits – there’s even a word for it: thalassotherapy. The magnesium in seawater may also help hydrate and improve the appearance of your skin. According to a study in the February 2005 edition of the International Journal of Dermatology, bathing in a magnesium-rich Dead Sea salt solution helps promote skin moisture.

When we experience stress – such as getting into cold water – our heart and breathing rates increase. But the rate of this increase can be halved with regular short periods of immersion (between three and five minutes) in cold water, according to a report in the Journal of Physiology.

A study commissioned by Swim England to coincide with ‘World Mental Health Day’ found that when queried about the impact swimming has on their day-to-day life, 43pc of people who swim regularly said it makes them feel happier, 26pc are more motivated to complete daily tasks while 15pc believe life feels more manageable.

But all the studies in the world won’t convince you until you try it. When you swim in cold water the body shuts down blood flow to the skin and extremities – it’s why you can look a bit blue when you get out. But when you start to heat up again and you feel the blood flowing back around the body again, it brings with it a kind of high, almost like a rush. It’s a post-swim euphoria. It’s totally natural and it’s free.

Knowing your limits, swimming with others and being fully respectful of the power of the ocean are paramount when you go wild swimming. I have turned back on occasion when the water looks too rough. You always have to remember this is not your habitat. The sea is unpredictable, but finding a safe place, knowing the tides and going in company are good rules of thumb.

According to John Leech of Irish Water Safety (IWS), it’s a good idea to use an inflatable swim buoy which you can attach to your ankle. This gives you an added safety dimension. He also says being aware of tides and not swimming alone are paramount to safety. “We are delighted that more and more people are recognising the benefits of swimming all year round,” says Leech.

Nowadays I always travel with my togs in the back of the car – just in case. I find myself looking at the tides. On some days when the tide is high and the sea glints in the sunlight, but I have a million things to do, I long to just leap in.

While the beach is great on warm summer days, I prefer it in November and December when it’s quiet, when taking the plunge feels like an achievement. It makes me feel good about myself. I feel strong. I feel like I’ve braved the elements. Getting in all year round is a challenge, but there is no day I ever regret a swim. It’s always the best thing I can do for myself.

Every swim is different; the waves, the swell, the weather – you feel every element. On one evening last week the day was almost over and the tide was high as I got in for a dip with my husband. As the sun sank it bathed everything in a pink glow. I looked out to the horizon and back to the beach. Everything glowed and so did I.

‘The key thing with wild swimming is to relax. People often panic in cold water’

Mark McCollum (52) from Ramelton in Co Donegal has been swimming in the open water for 20 years. He credits swimming with his recovery from a quadruple bypass 11 years ago, but says safety must come first when swimmers take to the open water whether it’s in a lake, a river or the sea.

“People come to us and say ‘I can swim two kilometres in the pool’. But comparing the sea to a pool is a bit like comparing driving a car in a video game to driving a real car,” says Mark.

“The first thing about the open water compared to a pool is there’s no lines and there’s hundreds of feet of water beneath you. The temperature of the water is cold and if you get tired you can’t just move to the side. There’s also things like wind, waves and current to deal with in open water,” says Mark.

“Look for like-minded people. There are open water swimming groups – find one in your area. We would recommend that you don’t go on your own; you should go as part of a group. It’s also important to know the area you’re going swimming in. It may be beautiful, but there could be a dangerous current. I would be wary unless I knew someone in the local area who was able to tell me it was safe,” he says.

“There’s a big different between being physically fit and being water fit. The key thing with open water swimming is to relax. People often panic in cold water,” says Mark.

He points out that people also often underestimate distances in open water. “If it’s easy on the way out, it’s going to be harder on the way back. The temptation can be to swim out to sea, but it’s better to swim parallel to shore”.

“Wear a luminous hat – boat traffic won’t expect to see you in the water and it’s a good idea to wear a luminous buoy. That way if you get a cramp it will support you,” he says.

“For the first forty seconds in the water it will feel like you are going against everything your body says you should be doing. Your body will literally be shrieking at you to get out. You can go into cold water shock where your breathing becomes erratic and your muscles tense up. But don’t panic. It will pass. Settle your breathing.”

“When you get of the water, it’s important to change quickly because the body temperature can continue to drop. Get back into a warm environment quickly afterwards,” he says.

Dr Eamonn Shanahan, a Kerry-based GP, says while he’s not advocating that people restrict their swimming to hot, summer days, they do need to be aware of the fact that hypothermia is a risk, even for experienced swimmers.

Dr Shanahan, who works in the Farranfore Medical Centre in Kerry, says his advice to novices wanting to take a dip for the first time is to wear a wet suit.

“The main issue is the cold and this causes cramping which can be dangerous. You will lose heat rapidly when you’re surrounded by cold water,” says Dr Shanahan.

“Experienced swimmers might wear a swimsuit but if you’re going out for anything more than a quick dip, my advice would be to wear a wetsuit. Don’t go too far out and swim parallel to the shore. The usual advice around not consuming alcohol and not eating before you swim also applies,” says Dr Shanahan.

He also advises that anyone known to have a cardiac problem should talk to their GP before going open water swimming.