Lately, in the ongoing conversation about how to defeat the coronavirus, experts have made reference to the “Swiss cheese model” of pandemic defense.

The metaphor is easy enough to grasp: Multiple layers of protection, imagined as cheese slices, block the spread of the new coronavirus, SARS-CoV-2, the virus that causes Covid-19. No one layer is perfect; each has holes, and when the holes align, the risk of infection increases. But several layers combined — social distancing, plus masks, plus hand-washing, plus testing and tracing, plus ventilation, plus government messaging — significantly reduce the overall risk. Vaccination will add one more protective layer.

“Pretty soon you’ve created an impenetrable barrier, and you really can quench the transmission of the virus,” said Dr. Julie Gerberding, executive vice president and chief patient officer at Merck, who recently referenced the Swiss cheese model when speaking at a virtual gala fund-raiser for MoMath, the National Museum of Mathematics in Manhattan.

“But it requires all of those things, not just one of those things,” she added. “I think that’s what our population is having trouble getting their head around. We want to believe that there is going to come this magic day when suddenly 300 million doses of vaccine will be available and we can go back to work and things will return to normal. That is absolutely not going to happen fast.”

Rather, Dr. Gerberding said in a follow-up email, expect to see “a gradual improvement in protection, first among the highest need groups, and then more gradually among the rest of us.” Until vaccines are widely available and taken, she said, “we will need to continue masks and other common-sense measures to protect ourselves and others.”

In October, Bill Hanage, an epidemiologist at the Harvard T.H. Chan School of Public Health, retweeted an infographic rendering of the Swiss cheese model, noting that it included “things that are personal *and* collective responsibility — note the ‘misinformation mouse’ busy eating new holes for the virus to pass through.”

“One of the first principles of pandemic response is, or ought to be, clear and consistent messaging from trusted sources,” Dr. Hanage said in an email. “Unfortunately the independence of established authorities like the C.D.C. has been called into question, and trust needs to be rebuilt as a matter of urgency.” A catchy infographic is a powerful message, he said, but ultimately requires higher-level support.

The Swiss cheese concept originated with James T. Reason, a cognitive psychologist, now a professor emeritus at the University of Manchester, England, in his 1990 book, “Human Error.” A succession of disasters — including the Challenger shuttle explosion, Bhopal and Chernobyl — motivated the concept, and it became known as the “Swiss cheese model of accidents,” with the holes in the cheese slices representing errors that accumulate and lead to adverse events.

The model has been widely used by safety analysts in various industries, including medicine and aviation, for many years. (Dr. Reason did not devise the “Swiss cheese” label; that is attributed to Rob Lee, an Australian air-safety expert, in the 1990s.) The model became famous, but it was not accepted uncritically; Dr. Reason himself noted that it had limitations and was intended as a generic tool or guide. In 2004, at a workshop addressing an aviation accident two years earlier near Überlingen, Germany, he delivered a talk with the title, “Überlingen: Is Swiss cheese past its sell-by date?”

In 2006, a review of the model, published by the Eurocontrol Experimental Center, recounted that Dr. Reason, while writing the book chapter “Latent errors and system disasters,” in which an early version of the model appears, was guided by two notions: “the biological or medical metaphor of pathogens, and the central role played by defenses, barriers, controls and safeguards (analogous to the body’s autoimmune system).”

The cheese metaphor now pairs fairly well with the coronavirus pandemic. Ian M. Mackay, a virologist at the University of Queensland, in Brisbane, Australia, saw a smaller version on Twitter, but thought that it could do with more slices, more information. He created, with collaborators, the “Swiss Cheese Respiratory Pandemic Defense” and engaged his Twitter community, asking for feedback and putting the visualization through many iterations. “Community engagement is very high!” he said. Now circulating widely, the infographic has been translated into more than two dozen languages. 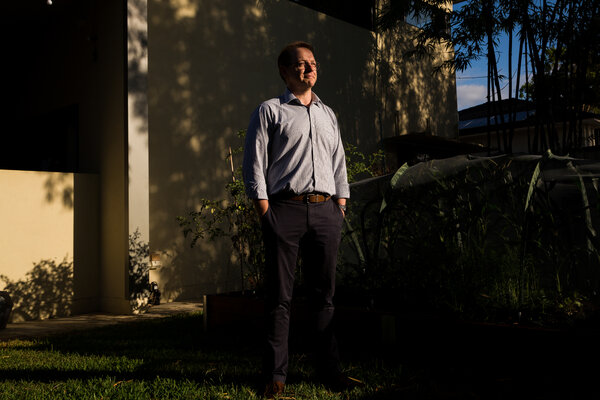 “This multilayered approach to reducing risk is used in many industries, especially those where failure could be catastrophic,” Dr. Mackay said, via email. “Death is catastrophic to families, and for loved ones, so I thought Professor Reason’s approach fit in very well during the circulation of a brand-new, occasionally hidden, sometimes severe and occasionally deadly respiratory virus.”

The following is an edited version of a recent email conversation with Dr. Mackay.

Q. What does the Swiss cheese model show?

A. The real power of this infographic — and James Reason’s approach to account for human fallibility — is that it’s not really about any single layer of protection or the order of them, but about the additive success of using multiple layers, or cheese slices. Each slice has holes or failings, and those holes can change in number and size and location, depending on how we behave in response to each intervention.

Take masks as one example of a layer. Any mask will reduce the risk that you will unknowingly infect those around you, or that you will inhale enough virus to become infected. But it will be less effective at protecting you and others if it doesn’t fit well, if you wear it below your nose, if it’s only a single piece of cloth, if the cloth is a loose weave, if it has an unfiltered valve, if you don’t dispose of it properly, if you don’t wash it, or if you don’t sanitize your hands after you touch it. Each of these are examples of a hole. And that’s in just one layer.

To be as safe as possible, and to keep those around you safe, it’s important to use more slices to prevent those volatile holes from aligning and letting virus through.

Q. What have we learned since March?

A. Distance is the most effective intervention; the virus doesn’t have legs, so if you are physically distant from people, you avoid direct contact and droplets. Then you have to consider inside spaces, which are especially in play during winter or in hotter countries during summer: the bus, the gym, the office, the bar or the restaurant. That’s because we know SARS-CoV-2 can remain infectious in aerosols (small floaty droplets) and we know that aerosol spread explains Covid-19 superspreading events. Try not to be in those spaces with others, but if you have to be, minimize your time there (work from home if you can) and wear a mask. Don’t go grocery shopping as often. Hold off on going out, parties, gatherings. You can do these things later.