The Coronavirus Is a Master of Mixing Its Genome, Worrying Scientists

In recent weeks, scientists have sounded the alarm about new variants of the coronavirus that carry a handful of tiny mutations, some of which seem to make vaccines less effective.

But it is not just these small genetic changes that are raising concerns. The novel coronavirus has a propensity to mix large chunks of its genome when it makes copies of itself. Unlike small mutations, which are like typos in the sequence, a phenomenon called recombination resembles a major copy-and-paste error in which the second half of a sentence is completely overwritten with a slightly different version.

A flurry of new studies suggests that recombination may allow the virus to shapeshift in dangerous ways. But in the long term, this biological machinery may offer a silver lining, helping researchers find drugs to stop the virus in its tracks.

“There’s no question that recombination is happening,” said Nels Elde, an evolutionary geneticist at the University of Utah. “And in fact, it’s probably a bit underappreciated and could be at play even in the emergence of some of the new variants of concern.”

The coronavirus mutations that most people have heard about, such as those in the B.1.351 variant first detected in South Africa, are changes in a single “letter” of the virus’s long genetic sequence, or RNA. Because the virus has a robust system for proofreading its RNA code, these small mutations are relatively rare.

Recombination, in contrast, is rife in coronaviruses.

Researchers at Vanderbilt University Medical Center led by virologist Mark Denison recently studied how things go awry during replication in three coronaviruses, including SARS-CoV-2, which causes Covid. The team found that all three viruses showed “extensive” recombination when replicating separately in the laboratory.

Scientists worry that recombination might allow for different variants of the coronavirus to combine into more dangerous versions inside of a person’s body. The B.1.1.7 variant first detected in Britain, for example, had more than a dozen mutations that seemed to appear suddenly.

Dr. Elde said that recombination may have merged mutations from different variants that arose spontaneously within the same person over time or that co-infected someone simultaneously. For now, he said, that idea is speculative: “It’s really hard to see these invisible scars from a recombination event.” And although getting infected with two variants at once is possible, it’s thought to be rare.

Katrina Lythgoe, an evolutionary epidemiologist at the Oxford Big Data Institute in Britain, is skeptical that co-infection happens often. “But the new variants of concern have taught us that rare events can still have a big impact,” she added.

Recombination might also allow two different coronaviruses from the same taxonomic group to swap some of their genes. To examine that risk more closely, Dr. Elde and his colleagues compared the genetic sequences of many different coronaviruses, including SARS-CoV-2 and some of its distant relatives known to infect pigs and cattle. 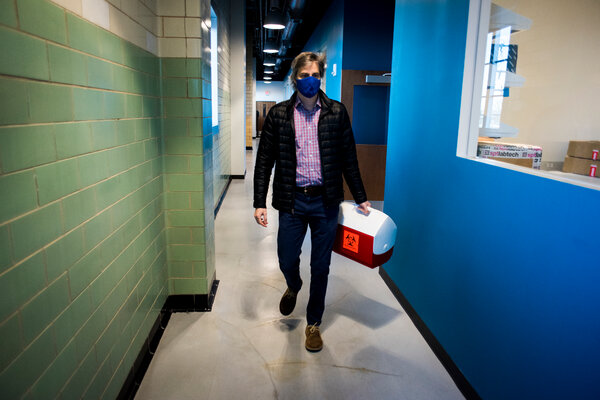 Using specially developed software, the scientists highlighted the places where those viruses’ sequences aligned and matched — and where they didn’t. The software suggested that over the past couple of centuries of the viruses’ evolution, many of the recombination events involved segments that made the spike protein, which helps the virus enter human cells. That’s troubling, the scientists said, because it could be a route through which one virus essentially equips another to infect people.

“Through this recombination, a virus that can’t infect people could recombine with a virus like SARS-CoV-2 and take the sequence for spike, and could become able to infect people,” said Stephen Goldstein, an evolutionary virologist who worked on the study.

The findings, which were posted online on Thursday but have not yet been published in a scientific journal, offered fresh evidence that related coronaviruses are quite promiscuous in terms of recombining with each other. There were also many sequences that cropped up in the coronaviruses that seemed to come out of nowhere.

“In some cases, it almost looks like there’s sequence dropping in from outer space, from coronaviruses we don’t even know about yet,” Dr. Elde said. The recombination of coronaviruses across totally different groups has not been closely studied, in part because such experiments would potentially have to undergo government review in the United States because of safety risks.

Feng Gao, a virologist at Jinan University in Guangzhou, China, said that although the new software from the Utah researchers found unusual sequences in coronaviruses, that doesn’t provide ironclad evidence for recombination. It could simply be that they evolved that way on their own.

“Diversity, no matter how much, does not mean recombination,” Dr. Gao said. “It can well be caused by huge diversification during viral evolution.”

Let Us Help You Better Understand the Coronavirus