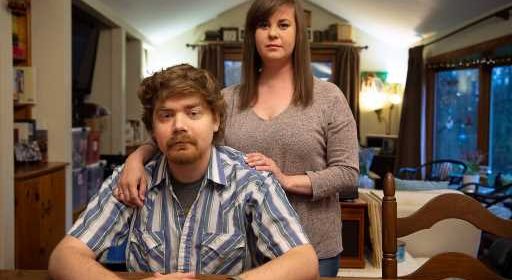 Sean Deines and his wife, Rebekah, were road-tripping after he lost his job as a bartender when the pandemic hit. But while visiting his grandfather in a remote part of Wyoming, Sean started to feel very ill.

Rebekah insisted he go to an urgent care center in Laramie.

“‘Your white blood count is through the roof. You need to get to an ER right now,’” Deines, 32, recalls a staffer saying. The North Carolina couple initially drove to a hospital in Casper but were quickly airlifted to the University of Colorado Hospital near Denver, where he was admitted on Nov. 28, 2020.

“Literally within 12 hours, I needed to figure out what to do with the next step of my life,” said Deines.

So, after he was started on intravenous treatments, including steroids and antibiotics, in Colorado to stabilize him, the couple decided it was prudent to return to North Carolina, where they could get help from his mother and mother-in-law. They selected Duke University Medical Center in Durham, which was in his insurance network.

His family called Angel MedFlight, part of Aviation West Charters of Scottsdale, Arizona, which told Rebekah Deines that it would accept whatever the couple’s insurer would pay and that they would not be held responsible for any remaining balance.

Sean Deines was flown to North Carolina on Dec. 1, 2020, and taken by ground ambulance to Duke, where he spent the next 28 days as an inpatient.

By his discharge, he felt better and things were looking up.

Then the bills came.

Medical Service: A 1,468-mile air ambulance flight from Colorado to North Carolina, along with ground transportation between the hospitals and airports.

Total Bill: $489,000, most of which was for the flight from Denver, with approximately $70,000 for the ground ambulance service to and from the Denver and Raleigh-Durham airports.

What Gives: Insurers generally get to decide what care is “medically necessary” and therefore covered. And that is often in the eye of the beholder. In this case, the debate revolved first around whether Deines was stable enough to safely take a three-plus-hour commercial flight to North Carolina during a pandemic or required the intensive care the air ambulance provided. Second, there was the question of whether Deines should have stayed in Denver for his 28-day treatment to get him into remission. Insurers tend not to consider patient stress or family convenience in their decisions.

Also, both air and ground ambulance services have been center stage in the national fight over huge surprise bills, since the for-profit companies that run them frequently do not participate in insurance networks.

Angel MedFlight, which was not in Deines’ insurance network, sought prior authorization from Blue Cross Blue Shield of North Carolina. The request was dated Nov. 30, but the insurer said the fax arrived in the predawn hours the same day as the flight, Dec. 1, 2020.

On that day, Angel MedFlight flew Deines to North Carolina in an airplane, along with a nurse to oversee his IV medications and oxygen levels.

Angel MedFlight spokesperson Kimberly Halloran did not answer a specific written question from KHN about why the flight went ahead without prior approval; often medical interventions are postponed until it has been obtained. But in an emailed statement, she said the company “satisfied each step in the health insurance process and transported Sean to his long-term health care providers in good faith.”

According to the review of the case done months later by an independent evaluator, Blue Cross on Dec. 3 denied coverage for the air ambulance services because medical records did not support that it was an emergency and Deines was already in an appropriate medical facility.

At the end of December, an appeal was filed against that decision on behalf of Deines by Angel MedFlight.

Then, in March 2021, Blue Cross sent Deines a check for $72,000 to cover part of the $489,000 bill, which he forwarded to the air ambulance company. The explanation of benefits showed the majority of the charges were ruled “not medically necessary.”

Angel MedFlight, through a revenue management firm it hires called MedHealth Partners, continued to appeal to Blue Cross to overturn the denial of the flight portion of the bill.

Then, three months after Blue Cross sent the check that Deines then sent on to Angel MedFlight, the insurer demanded Deines pay back the $72,000.

“The initial thought was ‘I can’t believe this is happening,’” said Deines.

When Deines, who was still unemployed and undergoing treatment, couldn’t pay, the debt was sent to collections.

In late June, Deines’ representatives at Angel MedFlight took the next step allowed under the Affordable Care Act, appealing the insurer’s internal determination that the flight wasn’t medically necessary to an independent third party through the state.

On July 29, the evaluator ruled in favor of Blue Cross.

Normally, such a flight would be appropriate because the patient was “medically unfit to travel via commercial airflight,” the review noted. But, it went on to say, there was actually no need to travel, as the University of Colorado Hospital — a member of the National Comprehensive Cancer Network — could have managed Deines’ treatment.

His health plan “clearly stipulates their indications for medical flight coverage and, unfortunately, this case does not meet that criteria,” the review concluded.

Resolution: The bill disappeared only after the press got involved. Shortly after a KHN reporter contacted the communications representatives for both the insurer and Angel MedFlight, Deines heard from both of them.

The $72,000 payment was made in error, said Blue Cross spokesperson Jami Sowers.

“We apologize for putting the member in the middle of this complicated situation,” she said in an email that also noted “the air ambulance company billed more than $70,000 just for ground transportation to and from the airport — more than 30 times the average cost of medical ground transport.”

Such a situation would “typically” be flagged by internal systems but for some reason was not, Sowers said.

“I have never heard of a ground transport that costs that much. That’s shocking,” said Erin Fuse Brown, director of the Center for Law, Health & Society at Georgia State University College of Law, who studies patient billing and air ambulance costs.

“Once North Carolina Blue engages in our formal inquiries about its refund request, the status of the funds will be resolved,” the ambulance spokesperson wrote in her email. “One thing is certain, Sean will not have to pay for North Carolina’s wavering coverage decision.”

In an email, Sowers said Blue Cross had “ceased all recoupment efforts” related to Sean’s case.

The Takeaway: If the flight had happened this year, the couple might have received more price information before they took the flight.

A law called the No Surprises Act took effect Jan. 1. Its main thrust is to protect insured patients from “balance bills” for the difference between what their insurance pays and what an out-of-network provider charges in emergencies.

It also covers non-emergency situations in which an insured patient is treated in an in-network facility by an out-of-network provider. In those cases, the patient would pay only what they would owe had the service been fully in-network.

Another part of the law, called a good faith estimate, might have provided Deines with more transparency into the costs.

That portion says medical providers, including air ambulances, must give upfront cost estimates in nonemergency situations to patients. Had the law been in effect, Deines might have learned before the flight that it could be billed at $489,000.

Insured patients in similar situations today should always check first with their insurer, if they are able, to see if an air transport would be covered, experts said.

Even if the law had been in effect, it likely would not have helped with the big hang-up in Deines’ case: the disagreement over “medical necessity.” Insurers still have leeway to define it.

For his part, Deines said he’s glad he took the flight to be closer to home and family, despite the later financial shock.

“I would not change it, because it provided support for myself and my wife, who needed to take care of me; she was keeping my sanity,” he said.

Bill of the Month is a crowdsourced investigation by KHN and NPR that dissects and explains medical bills. Do you have an interesting medical bill you want to share with us? Tell us about it!

Kaiser Health News is a national health policy news service. It is an editorially independent program of the Henry J. Kaiser Family Foundation which is not affiliated with Kaiser Permanente.