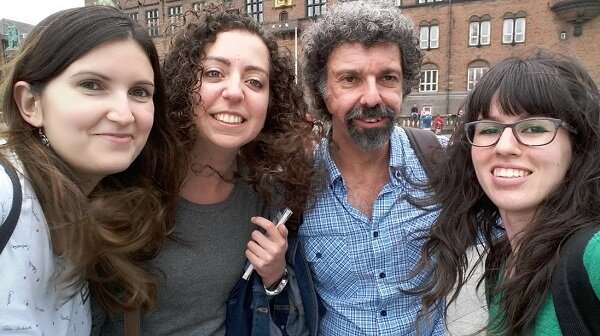 Alzheimer’s disease is the main neurodegenerative disease in old people for which there is no treatment or efficient prevention yet. Current diagnostic methods do not detect one of the earliest and most relevant alterations of the disease: the degree of synaptic dysfunction that shows the neuronal damage. A research study by the Intercellular Communication Group of the Faculty of Biology and the Institute of Neurosciences of the University of Barcelona (UBNeuro), led by Professor Fernando Aguado, has discovered molecules in the cerebrospinal fluid of patients with Alzheimer’s that may be a potential biomarker of damage to synapses, the structure that allows communication between neurons.

The study has been published in the journal Translational Neurodegeneration, in an article whose first authors are the researchers Neus Barranco and Virginia Plá, and in which the Ph.D. student Irene Sánchez has also participated. Also, among the participants in the study are Alberto Lleó and Daniel Alcolea, from the Unit of Memory of the Neurology Service at Hospital de la Santa Creu i Sant Pau and the Center for Networking Biomedical Neurodegenerative Diseases (CIBERNED); Isidro Ferrer, from the Department of Pathology and Experimental Therapeutics of the UB, the Hospital de Bellvitge, the Bellvitge Biomedical Research Institute (IDIBELL) and CIBERNED; and Reiner Fischer-Colbrie, from the Department of Pharmacology of the Medical University of Innsbruck (Austria).

Current methods for diagnosing Alzheimer’s include cognitive impairment tests, neuroimaging techniques and cerebrospinal fluid analyses. The biomarkers in the cerebrospinal fluid are associated with the presence of amyloid plaques and neurofibrillary tangles, the main neuropathological marks of Alzheimer’s disease. However, to date, no biomarkers have been identified that show evidence of early alterations in synapses, which are often associated with memory and cognition loss in Alzheimer’s patients. According to Fernando Aguado, finding these indicators is “necessary to know about the progression of the disease, as well as to evaluate new treatments against the neurodegenerative processes it triggers.”

In this study, researchers have analyzed several molecular components of dense core vesicles (DCVs) in the brain cortex and cerebrospinal fluid of patients with Alzheimer’s and compared them with those of a control group. These vesicles secrete protein transmitters, such as neuropeptides and growth factors, in response to neuronal activity and they play a crucial role in modulating the activity and synaptic plasticity of neural circuits. “In this study, we have explored the possibility that little-studied secretable components of dense center vesicles in the brain may be altered in the cerebrospinal fluid and cortical tissue of patients with Alzheimer’s” explains Aguado.

The results show a correlation of the levels of two of these components, PC1/3 and PC2 proteins, with the degree of cognitive impairment and with established markers of neurodegeneration such as pathological aggregation of tau proteins in the brain. “For the first time, we demonstrate a correlation between the levels of these proteins and degrees of cognitive impairment and tauopathy. Considering that PC1/3 and PC2 are produced only by neurons and mostly secreted at synapses, we propose the potential use of the levels of these components as complementary biomarkers that can help determine synaptic damage and neurodegeneration in Alzheimer’s patients,” explains Fernando Aguado.