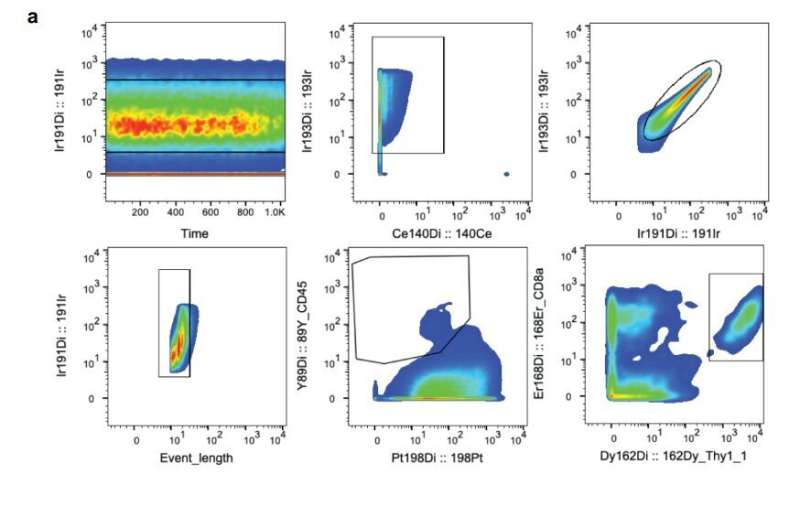 Before a patient can undergo T cell therapy designed to target cancerous tumors, the patient’s entire immune system must be destroyed with chemotherapy or radiation. The toxic side effects are well known, including nausea, extreme fatigue and hair loss.

Now a research team, led by UCLA’s Anusha Kalbasi, MD, in collaboration with scientists from Stanford and the University of Pennsylvania, has shown that a synthetic IL-9 receptor allows those cancer-fighting T cells to do their work without the need for chemo or radiation. T cells engineered with the synthetic IL-9 receptor, designed in the laboratory of Christopher Garcia, Ph.D., at Stanford, were potent against tumors in mice, as published Wednesday in Nature.

“When T cells are signaling through the synthetic IL-9 receptor, they gain new functions that help them not only outcompete the existing immune system but also kill cancer cells more efficiently,” Kalbasi said. “I have a patient right now struggling through toxic chemotherapy just to wipe out his existing immune system so T cell therapy can have a fighting chance. But with this technology you might give T cell therapy without having to wipe out the immune system beforehand.”

Kalbasi, a researcher at the UCLA Jonsson Comprehensive Cancer Center and an assistant professor of radiation oncology at the David Geffen School of Medicine at UCLA, began the work while under the mentorship of Antoni Ribas, MD, Ph.D., a senior investigator on the study. The study was also led by Mikko Siurala, Ph.D., from the laboratory of Carl June, MD, at Penn, and Leon L. Su, Ph.D., of the Garcia Lab at Stanford.

“This finding opens a door for us to be able to give T cells a lot like we give a blood transfusion,” Ribas said.

Ribas and Garcia collaborated on a paper published in 2018 that focused on the concept that a synthetic version of interleukin-2 (IL-2), a critical T cell growth cytokine, could be used to stimulate T cells engineered with a matching synthetic receptor for the synthetic IL-2. With this system, T cells can be manipulated even after they have been given to a patient, by treating the patient with the synthetic cytokine (which has no effect on other cells in the body). Intrigued by that work, Kalbasi and colleagues were interested in testing modified versions of the synthetic receptor that transmit other cytokine signals from the common-gamma chain family: IL-4, -7, -9 and -21.

“It was clear early on that, among the synthetic common-gamma chain signals, the IL-9 signal was worth investigating,” Kalbasi said, adding that unlike other common-gamma chain cytokines, IL-9 signaling is not typically active in naturally occurring T cells. The synthetic IL-9 signal made T cells take on a unique mix of both stem-cell and killer-like qualities that made them more robust in fighting tumors. “In one of our cancer models, we cured over half the mice that were treated with the synthetic IL-9 receptor T cells.”