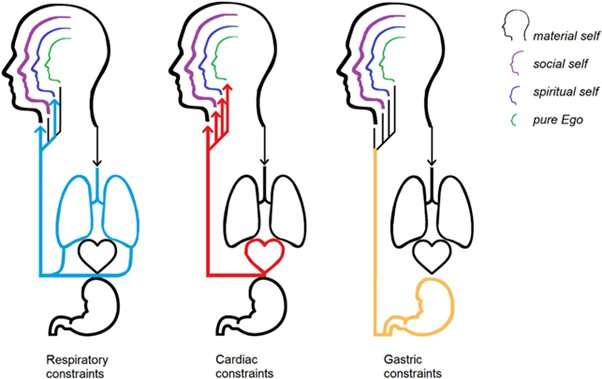 In contrast with other animal species on Earth, over the course of their life, humans can develop a fairly clear idea of who they are as individuals and what sets them apart from others. This abstract concept of self is known to be fragmented and fuzzy in individuals with certain psychiatric disorders, including schizophrenia, borderline personality disorder and dissociative identity disorder.

Researchers at the Aglioti Lab, part of Sapienza University of Rome recently authored a review paper examining experimental evidence suggesting that the birth, maintenance and loss of this abstract concept of self is deeply tied to what is known as interoception. This refers to an individual’s sense of his/her internal physiological signals.

“A couple of years ago, we discovered a new bodily illusion here at the Aglioti Lab,” Alessandro Monti, one of the researchers who carried out the study, told Medical Xpress. “This ’embreathment’ illusion, as we called it, suggests that your concept of yourself (i.e., who you think you are) is partly shaped by feelings that come from your viscera, particularly from the heart and the lungs. We discussed our work with Prof. Anna Borghi, a good friend and colleague of ours.”

When Monti and his colleagues started discussing the illusion that they observed with Prof. Borghi, they realized that the concept of self has several dimensions, ranging from mundane and material to social and spiritual. They thus decided to investigate the illusion more in depth and try to better understand what it suggested about people’s concept of self.

“Together with Prof. Borghi, we explored a number of questions, such as: Does the perception of internal bodily signals (also known as ‘interoception’) influence all these dimensions of the self, or just some of them? Do specific organs influence specific facets of the self-concept? And what happens when this perception goes awry? In the end, we decided to write a review to answer these questions and frame our experimental results in a bigger picture,” Monti said.

“We reviewed a series of experiments linking participants’ interoception, measured through questionnaires and physiological recordings, to these four layers of their self-concept,” Monti said. “We included studies both on healthy participants and on psychiatric patients with a distorted or fragmented sense of self—such as those who experience depersonalisation, schizophrenia or eating disorders.”

Both for studies involving healthy subjects and those focusing on psychiatric patients, the researchers examined whether one’s concept of self was more likely to include features that were associated with stronger physiological signals. The results of their analyses suggest that the most intimate and invariable features of people’s concept of self were those that were, quite literally, closest to the heart (i.e., those most influenced by interoceptive signals). In other words, people’s abstract concept of self appears to be closely influenced by their perception of signals originating from their body. More specifically, past studies suggest that those with a stronger and more stable concept of self are more entuned with their inner bodily signals, particularly their heartbeat and breath, and are less prone to sensory illusions.

“While the concept of self is related also to transient sensory and motor experiences, we claim that it is the cyclic physiology of the viscera that provides the self-concept with a firm foundation, contributing to its stability and sanity over time by making it less permeable to external influences,” Monti said. “We argue that this stabilizing role of interoception on the self-concept is not limited to the material self, but also extends to the social and spiritual self.”

The overreaching conclusion of the recent review paper authored by Monti and his colleagues is that humans’ abstract concept of self is not merely embodied; it is deeply embodied. In the future, this observation could have important implications for the development of treatment strategies for psychiatric patients with a fragmented or hindered concept of self.

“We are currently extending our research in two directions,” Monti said. “On the one hand, we believe that the link between interoception and disorders in which the self-concept is fragmented or loose deserves further attention. Thus, we are collaborating with other scientists and clinicians to assess the sense of self of patients suffering from a variety of medical and psychological conditions, to see whether interoceptive training may help them regain a more stable picture of themselves.”

In addition to exploring the link between interoception and a fragmented concept of self, the recent review paper highlighted a gap in existing literature that could be filled by future studies. More specifically, Monti and his colleagues found that currently little is known about the role of the gut (i.e., the gastrointestinal tract) in defining people’s sense of self.