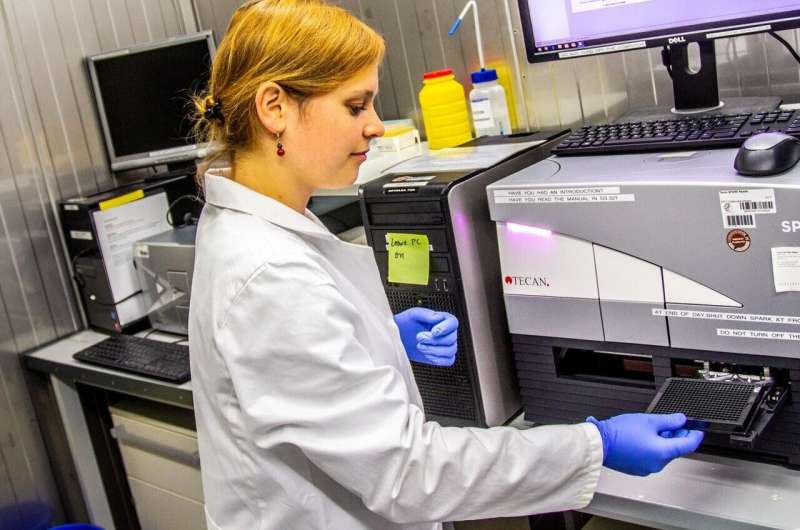 Our immune system is very successful when it comes to warding off viruses and bacteria. It also recognizes cancer cells as potential enemies and fights them. However, cancer cells have developed strategies to evade surveillance by the immune system and to prevent immune response.

New Inhibitors against IDO1—The Quest is on

IDO1 is in the focus of pharmaceutical research because of its cancer-driving effect. However, the search for IDO1 inhibitors has so far been only moderately successful and the first clinically tested IDO1 inhibitor, epacadostat, showed hardly any effect in clinical trials. However, it has not yet been possible to prove whether the inhibitor really blocks IDO1 in the tumor and whether the used dose is sufficient.

In drug discovery, experimental test procedures, so-called assays, are employed to search for new disease modulators in large libraries of thousands of compounds. For this purpose, mostly biochemical assays are applied, where a biochemical reaction is impaired if a substance shows an inhibitory effect in the assay. However, this method has certain disadvantages and limitations, as the test takes place in a test tube and not in the natural, cellular environment of the enzyme. For instance, enzymes like IDO1 are less stable and more reactive outside the protective shell of the cell. In addition, cell-free assays cannot detect indirect inhibitors of the enzyme, that for example interfere with its production or with essential co-factors.

Scientists led by Herbert Waldmann and Slava Ziegler have now developed a cell-based assay for the discovery of new IDO1 inhibitors that overcomes the limitations of cell-free assays. Elisabeth Hennes, Ph.D. student at the MPI and first author of the study, employed a sensor that measures the conversion of the IOD1 substrate tryptophan into the metabolic product kynurenine in cell culture and thereby detects IDO1 activity. Based on this test strategy, several highly potent inhibitors with different mechanisms of action were identified from a library of more than 150,000 chemical substances: These include substances that directly switch off IDO1 as well as indirect inhibitors that prevent the production of IDO1 itself or that of its important cofactor heme.