Specialty Pharmacies Cater to the Blind and Those with Impaired Vision

Listen to This Article

To hear more audio stories from publications like The New York Times, download Audm for iPhone or Android.

During the pandemic, Curtis Chong has avoided the 2-½ hour journey to his grocery store pharmacy — including a round-trip bus ride — to pick up his prescription.

Even though Mr. Chong, a retiree in Aurora, Colo., said he is readily identifiable as a blind person, because he uses a white cane for mobility, his pharmacist never suggested he could have his medications labeled in an accessible way.

Through a Zoom meeting, Mr. Chong learned about Accessible Pharmacy Services, a start-up, that now delivers his medication with labels that convert text to speech. Mr. Chong said the new specialty pharmacy provided an array of products and assistance “so that the blind can identify their medications privately and independently.”

Unlike most other pharmacies, Accessible Pharmacy does not cater to walk-in customers or, for that matter, people who can see. The company offers service to blind people and those with low vision, including assistance from those who can see and free home delivery for prescriptions, medical devices and over-the-counter medications.

The pandemic has cast a spotlight on inequalities at pharmacies, where precautions and new programs have further limited access to health care for people with intellectual, developmental and physical disabilities.

Critical services like drive-through coronavirus testing, vaccination and pharmacy pickup windows have failed in many instances because they were rolled out in ways that were inaccessible. How can a blind person drive through a pharmacy? Why isn’t walk-through an option?

In addition, labeling and packaging have been a longstanding problem for older adults and for anyone who cannot read or understand the tiny type that appears on most prescription bottles and the accompanying pamphlets listing side effects and drug interactions.

There is no national standard that specifically addresses accessible labeling or packaging, despite the potential needs of more than 85 million — approximately 1 in 4 — people in the United States who, according to the Census Bureau, have a disability, and more than 12 million people who have serious difficulty seeing.

The Food and Drug Administration is responsible for regulating prescription drug labels, and under a 2012 law, required a U.S. agency to develop guidelines for accessible labels for those who are blind or visually impaired. In 2016, the Government Accountability Office found that blind and low-vision patients “continue to face barriers accessing drug label information, including identifying pharmacies that can provide accessible labels.” 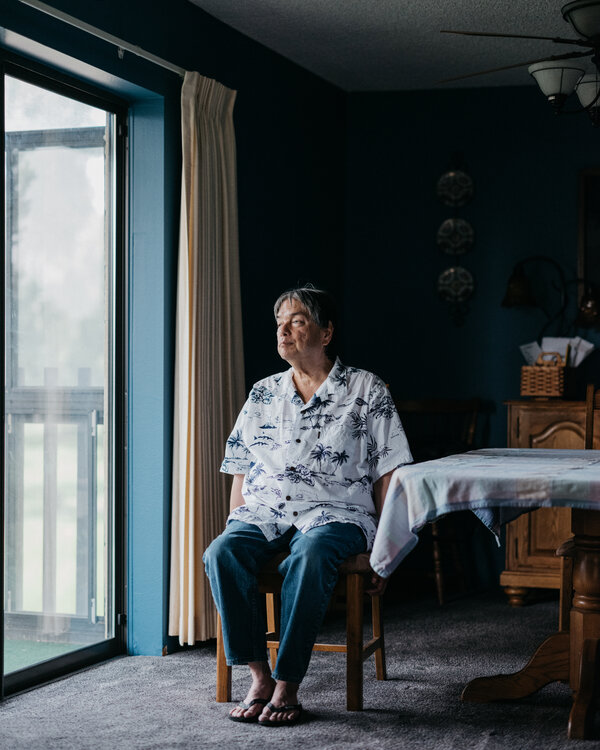 Some improvements have been made, and states have taken the lead on pharmacy oversight. A few, including Pennsylvania, Massachusetts, and Maine, are exploring legislation that would require pharmacies to provide prescription labels in Braille, large print, high-contrast and with audio. In 2018, Nevada passed a law requiring pharmacies to provide a prescription reader or to help patients obtain one, and Oregon passed a similar law in 2019.

Nestled in a nondescript mini-mall, next to a Pizza Hut and a partially vacant building, Accessible Pharmacy operates in Fairless Hills, Penn. Concierge agents speak with each patient on the phone, coordinate refills and drug interaction questions with their doctors and consult resident pharmacists. A packaging and labeling menu for prescriptions includes Braille, large print, and audio — all free of charge.

“We decided to create a company where accessibility and reduction of barriers would be our primary focus with an incredibly welcoming sense of hospitality,” said Alex Cohen, 45, company co-founder and professor of marketing at West Chester University outside of Philadelphia, and one-time general manager of a hotel. He became blind after being diagnosed with retinitis pigmentosa, a genetic degenerative disease, when he was 20.

Accessible Pharmacy, which launched in May 2020, resulted from collaboration between Mr. Cohen, the chief marketing and accessibility officer, and Andy Burstein, the chief executive.

“It’s still like the Wild West for us in terms of reliably and consistently finding solutions at the national level,” said Mr. Chong, 67. He gets his prescriptions from Accessible Pharmacy with ScripTalk. A tag is placed on the bottom of each pill container that is programmed to include medication information. It can be read aloud using the ScripTalk app on his iPhone or with a free-standing device. (En-Vision America, the manufacturer, said ScripTalk is available in 25 languages and is used by over 20,000 people.)

Mr. Chong pays more for his medications because Accessible Pharmacy isn’t a preferred pharmacy with his Medicare plan, but said he is willing to pay extra so that his medication labels are tailored to his needs.

He also said he found the websites of major drugstore chains problematic because of unlabeled graphics, requests for the prescription number and a “general lack of efficiency” when ordering refills.

Accessible Pharmacy employees respond to video calls via Be My Eyes, a free app that provides assistance for blind and low-vision people using a network of sighted volunteers. Users requiring help with prescriptions or devices receive sighted assistance from the pharmacy. It can also set up and send out talking medical devices including blood pressure cuffs, thermometers, blood glucose meters and continuous glucose monitors and troubleshoot through the app, once patients have a device in hand.

Lynn Heitz, 63, a community training specialist for the blind who lives in Phoenixville, Pa., said she preferred the company’s disposable pill organizer so that she doesn’t have to figure out what’s in every bottle, and the pharmacy sends her the next month’s supply one week before she runs out. After she and her husband were diagnosed with Covid-19, the pharmacy sent an overnight package with prednisone and cough syrup that her doctor prescribed.

This summer, the American Foundation for the Blind expanded its research on the effects of the pandemic to learn more about service interruptions as well as the short- and long-term issues encountered by those who are blind, deaf and blind or have low vision.

In an Op-Ed last fall, Penny Rosenblum, the former director of research at the foundation, described one such obstacle: “‘Drive-thru’ and ‘curbside pickup’ discriminate,” she wrote. “This doesn’t work for those with vision loss. Communities must have alternative plans, be it porch delivery, walk-up or bike-thru.”

DeAnna Quietwater Noriega, a writer and a full-time caregiver for her husband, Curtis, gets the couple’s prescriptions and any other pharmacy items they need hand-delivered to their front door by D&H Drugstore in Columbia, Mo. Ms. Noriega, 73, was born with glaucoma and has been blind since she was 8.

“They know us by name and always treat us with respect and friendliness,” she said of her independent pharmacy. “They go the extra mile to be sure our medications are compatible with each other and argue on our behalf if our insurance company balks at the drug our doctors prescribed.”

Ms. Noriega’s medications come with ScripTalk labels that she reads with her iPhone. Previously, she filled their prescriptions through Walmart. But the problem, she said, was the couple was never told when the refills had run out until they showed up at the pharmacy. “We were expected to read the very small print on the label,” she said.

Many independent pharmacies offer personalized services including home delivery to meet customers’ needs. Major drugstore chains also offer home delivery in many places. Over the last several years, chain pharmacies have become somewhat more accessible, in part, because of lawsuits and negotiations led by advocacy organizations like the American Council of the Blind.

But finding a pharmacy with a full menu of accessible solutions under one roof has been elusive. Last summer, CVS Health, which offers ScripTalk via its website, added a feature to its app called SpokenRx that can scan labels and read the prescription aloud, which the company said is now available in 10,000 stores.

Walmart also provides ScripTalk in nearly 1,800 Walmart and Sam’s Clubs locations. And there have been other agreements reached with Walgreens to offer its Talking Pill Reminder free of charge. Eric Bridges, executive director of the council, said they have yet to engage with Amazon Pharmacy.

Dr. Steven Erickson, a pharmacist and professor at the University of Michigan College of Pharmacy, teaches a class where guest speakers with various disabilities share their experiences with pharmacists so that students can demonstrate “disability cultural competence,” he said.

“Without that education there is a greater risk of patients stopping the medicine, or not taking it as intended by their physician,” he said.

Getting one-on-one time with a busy pharmacist can also be daunting, so people often settle for printed instructions. The small font size can be an impediment for people with low vision. In addition, those with cognitive issues or limited health literacy may have difficulty understanding the material. Lack of access can also affect deaf patients when the pharmacist doesn’t know sign language or when video relay service or a translator are not provided.

Disposable pill organizers and sealed packets provide a “user-friendly” solution, Dr. Erickson said, but some large chains do not provide them. (CVS offers presorted packets that can be delivered to one’s home or pharmacy for pickup.) And refilling medications at the same time — so-called med-syncing — also helps patients by reducing trips to the pharmacy.

Mr. Cohen said the company meets monthly with a packaging advisory committee of blind adults. Customer feedback led to the addition of pet and guide-dog medications to the delivery menu and over-the-counter sundries like aspirin and toothpaste.

What’s more, Dr. Erickson said it’s common for some people — especially those with intellectual and developmental disabilities — to have other medical conditions that require five or more prescriptions, a scenario known as polypharmacy.

For a few years, Hayden Shock, 28, who is deaf and had a kidney transplant, took several drugs for his condition. During the pandemic, Mr. Shock, a program analyst for the General Services Administration, who lives in Arlington, Va., used either an app that provides speech-to-text, called LiveCaption, or pen and paper when he went to Walgreens.

Masks posed another difficulty because they blocked the visual clues of pharmacy staff. (Safe’N’Clear makes an F.D.A.-approved mask with a window.) “I would not call myself a lip reader,” he said. “But I like to see people’s facial expression and lip movement when I communicate with them.”

When his insurance changed to Inova Pharmacy Services, which is affiliated with the regional nonprofit health care provider, it delivered his prescriptions. Through his video phone number, which is connected to apps like Convo, Purple or Sorenson, he can talk to the pharmacy staff with the aid of a sign language interpreter.

So far, Accessible Pharmacy has made inroads largely in the Northeast and mid-Atlantic regions of the country. Mr. Cohen said the company is licensed in 31 states and hopes to expand to all states.

The pandemic, Mr. Cohen notes, has given pharmacies and retailers reasons to rethink their customer service, because many “overestimated the role technology could play in assuaging” the fears of people with disabilities. The assumption that these communities of people with differing needs are tech savvy is “perilous,” he added, noting that some people still only have a landline.