Almost immediately, Dr. Hisam Goueli could tell that the patient who came to his psychiatric hospital on Long Island this summer was unusual.

The patient, a 42-year-old physical therapist and mother of four young children, had never had psychiatric symptoms or any family history of mental illness. Yet there she was, sitting at a table in a beige-walled room at South Oaks Hospital in Amityville, N.Y., sobbing and saying that she kept seeing her children, ages 2 to 10, being gruesomely murdered and that she herself had crafted plans to kill them.

The patient described one of her children being run over by a truck and another decapitated. “It’s a horrifying thing that here’s this well-accomplished woman and she’s like ‘I love my kids, and I don’t know why I feel this way that I want to decapitate them,’” he said.

The only notable thing about her medical history was that the woman, who declined to be interviewed but allowed Dr. Goueli to describe her case, had become infected with the coronavirus in the spring. She had experienced only mild physical symptoms from the virus, but, months later, she heard a voice that first told her to kill herself and then told her to kill her children.

At South Oaks, which has an inpatient psychiatric treatment program for Covid-19 patients, Dr. Goueli was unsure whether the coronavirus was connected to the woman’s psychological symptoms. “Maybe this is Covid-related, maybe it’s not,” he recalled thinking.

“But then,” he said, “we saw a second case, a third case and a fourth case, and we’re like, ‘There’s something happening.’”

Indeed, doctors are reporting similar cases across the country and around the world. A small number of Covid patients who had never experienced mental health problems are developing severe psychotic symptoms weeks after contracting the coronavirus.

A 36-year-old nursing home employee in North Carolina who became so paranoid that she believed her three children would be kidnapped and, to save them, tried to pass them through a fast-food restaurant’s drive-through window.

A 30-year-old construction worker in New York City who became so delusional that he imagined his cousin was going to murder him, and, to protect himself, he tried to strangle his cousin in bed.

A 55-year-old woman in Britain had hallucinations of monkeys and a lion and became convinced a family member had been replaced by an impostor.

Beyond individual reports, a British study of neurological or psychiatric complications in 153 patients hospitalized with Covid-19 found that 10 people had “new-onset psychosis.” Another study identified 10 such patients in one hospital in Spain. And in Covid-related social media groups, medical professionals discuss seeing patients with similar symptoms in the Midwest, Great Plains and elsewhere.

“My guess is any place that is seeing Covid is probably seeing this,” said Dr. Colin Smith at Duke University Medical Center in Durham, who helped treat the North Carolina woman. He and other doctors said their patients were too fragile to be asked whether they wanted to be interviewed for this article, but some, including the North Carolina woman, agreed to have their cases described in scientific papers.

Medical experts say they expect that such extreme psychiatric dysfunction will affect only a small proportion of patients. But the cases are considered examples of another way the Covid-19 disease process can affect mental health and brain function.

Although the coronavirus was initially thought primarily to cause respiratory distress, there is now ample evidence of many other symptoms, including neurological, cognitive and psychological effects, that could emerge even in patients who didn’t develop serious lung, heart or circulatory problems. Such symptoms can be just as debilitating to a person’s ability to function and work, and it’s often unclear how long they will last or how to treat them.

Experts increasingly believe brain-related effects may be linked to the body’s immune system response to the coronavirus and possibly to vascular problems or surges of inflammation caused by the disease process.

“Some of the neurotoxins that are reactions to immune activation can go to the brain, through the blood-brain barrier, and can induce this damage,” said Dr. Vilma Gabbay, a co-director of the Psychiatry Research Institute at Montefiore Einstein in the Bronx.

Brain scans, spinal fluid analyses and other tests didn’t find any brain infection, said Dr. Gabbay, whose hospital has treated two patients with post-Covid psychosis: a 49-year-old man who heard voices and believed he was the devil and a 34-year-old woman who began carrying a knife, disrobing in front of strangers and putting hand sanitizer in her food.

Physically, most of these patients didn’t get very sick from Covid-19, reports indicate. The patients that Dr. Goueli treated experienced no respiratory problems, but they did have subtle neurological symptoms like hand tingling, vertigo, headaches or diminished smell. Then, two weeks to several months later, he said, they “develop this profound psychosis, which is really dangerous and scary to all of the people around them.”

Also striking is that most patients have been in their 30s, 40s and 50s. “It’s very rare for you to develop this type of psychosis in this age range,” Dr. Goueli said, since such symptoms more typically accompany schizophrenia in young people or dementia in older patients. And some patients — like the physical therapist who took herself to the hospital — understood something was wrong, while usually “people with psychosis don’t have an insight that they’ve lost touch with reality.”

Some post-Covid patients who developed psychosis needed weeks of hospitalization in which doctors tried different medications before finding one that helped.

Dr. Robert Yolken, a neurovirology expert at Johns Hopkins University School of Medicine in Baltimore, said that although people might recover physically from Covid-19, in some cases their immune systems, might be unable to shut down or might remain engaged because of “delayed clearance of a small amount of virus.”

Persistent immune activation is also a leading explanation for brain fog and memory problems bedeviling many Covid survivors, and Emily Severance, a schizophrenia expert at Johns Hopkins, said post-Covid cognitive and psychiatric effects might result from “something similar happening in the brain.”

It may hinge on which brain region the immune response affects, Dr. Yolken said, adding, “some people have neurological symptoms, some people psychiatric and many people have a combination.” 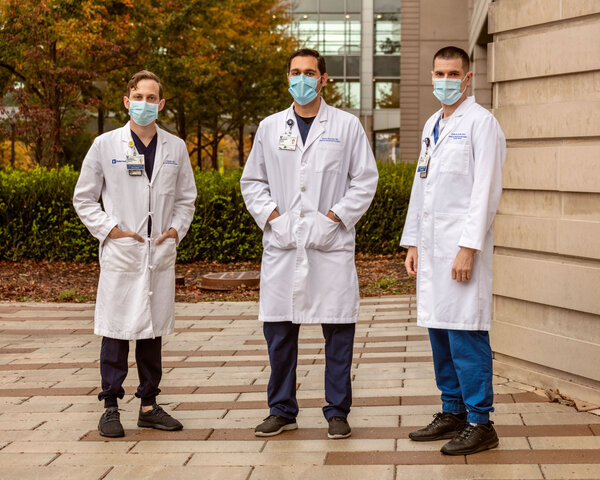 Experts don’t know whether genetic makeup or perhaps an undetected predisposition for psychiatric illness put some people at greater risk. Dr. Brian Kincaid, medical director of psychiatric emergency department services at Duke, said the North Carolina woman once had a skin reaction to another virus, which might suggest her immune system responds zealously to viral infections.

Sporadic cases of post-infectious psychosis and mania have occurred with other viruses, including the 1918 flu and the coronaviruses SARS and MERS.

“We think that it’s not unique to Covid,” said Dr. Jonathan Alpert, chairman of psychiatry and behavioral sciences at Albert Einstein College of Medicine, who co-wrote the report on the Montefiore patients. He said studying these cases might help to increase doctors’ understanding of psychosis.

The symptoms have ranged widely, some surprisingly severe for a first psychotic episode, experts said. Dr. Goueli said a 46-year-old pharmacy technician, whose family brought her in after she became fearful that evil spirits had invaded her home, “cried literally for four days” in the hospital.

He said the 30-year-old construction worker, brought to the hospital by the police, became “extremely violent,” dismantling a hospital radiator and using its parts and his shoes to try to break out of a window. He also swung a chair at hospital staff.

How long the psychosis lasted and patients’ response to treatment has varied. The woman in Britain — whose symptoms included paranoia about the color red and terror that nurses were devils who would harm her and a family member — took about 40 days to recover, according to a case report.

The 49-year-old man treated at Montefiore was discharged after several weeks’ hospitalization, but “he was still struggling two months out” and required readmission, Dr. Gabbay said.

The North Carolina woman, who was convinced that cellphones were tracking her and that her partner would steal her pandemic stimulus money, didn’t improve with the first medication, said Dr. Jonathan Komisar at Duke, who said doctors initially thought her symptoms reflected bipolar disorder. “When we began to realize that maybe this isn’t going resolve immediately,” he said, she was given an antipsychotic, risperidone and discharged in a week.

The physical therapist who planned to murder her children had more difficulty. “Every day, she was getting worse,” Dr. Goueli said. “We tried probably eight different medicines,” including antidepressants, antipsychotics and lithium. “She was so ill that we were considering electroconvulsive therapy for her because nothing was working.”

About two weeks into her hospitalization, she couldn’t remember what her 2-year-old looked like. Calls with family were heartbreaking because “‘You could hear one in the background saying ‘When is Mom coming home?’” Dr. Goueli said. “That brought her a lot of shame because she was like, ‘I can’t be around my kids and here they are loving me.’”

Ultimately, risperidone proved effective and after four weeks, she returned home to her family, “95 percent perfect,” he said.

“We don’t know what the natural course of this is,” Dr. Goueli said. “Does this eventually go away? Do people get better? How long does that normally take? And are you then more prone to have other psychiatric issues as a result? There are just so many unanswered questions.”