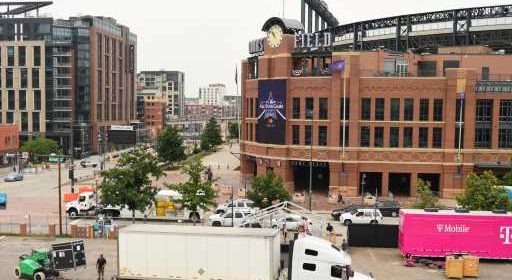 The number of COVID-19 cases linked to the MLB All-Star Game in Denver doubled compared to last week, but fewer than one in a thousand attendees reported an infection.

The Colorado Department of Public Health and Environment’s weekly outbreak report counted 30 cases among people who attended the festivities surrounding the July 13 game at Coors Field. More than 49,000 people attended the game itself, and an unknown number visited areas set aside for fans downtown. The previous week’s data included 14 cases.

The Colorado Rockies also first reported an outbreak to public health officials three days after the game, but it’s not clear if those eight cases are linked to the All-Star festivities.

The state doesn’t report information about whether infected people were vaccinated, how serious any symptoms they have are, or what areas they visited. It defines an outbreak as five or more cases linked to the same location or event. High-risk settings like nursing homes still have to declare an outbreak after only two cases.

The state health department connected 23 cases to Country Jam, held in Mesa County over the Independence Day weekend. The Greeley Stampede, held in late June and early July, has been linked to 25 cases, and 14 people may have been infected at The String Cheese Incident’s concerts at Red Rocks Amphitheatre between July 16 and 18.

Though thousands of people attended those events, they aren’t among the state’s largest outbreaks. The seven largest outbreaks still considered active in Colorado all started in the second half of 2020, and include clusters at universities and jails.

When comparing outbreaks that started this summer, the All-Star Game comes in fifth, behind a Colorado Springs nursing home, which has 64 cases; the Mesa County jail, which has 39; and youth camps in Larimer and Park counties, which each have 33.