Seven reasons to be cheerful on 'Blue Monday' 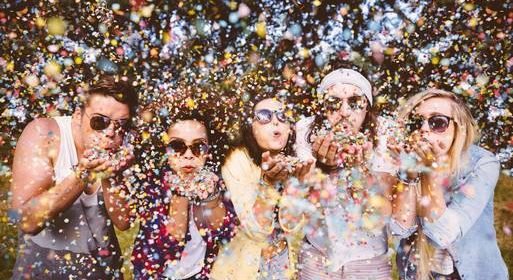 Tomorrow is so-called “Blue Monday” – apparently the most depressing day of the year.

But before you start sobbing into your cornflakes, listen up: Blue Monday isn’t real.

It’s a complete hoax – there’s no science behind it – and was made up by a PR company.

The trouble is, with everyone telling you it’s the most depressing day of the year, combined with grim wintry weather, the struggle to keep up with your New Year’s resolutions and well, the fact that it’s just a Monday, many of us end up having something of a sad day.

When you think it’s the most depressing day of the year, you may end up paying more attention to the negative things happening over the course of your day, rather than the positive ones.

But that needn’t be the case.

In fact, there are plenty of reasons why tomorrow can in fact be one of the cheeriest days of the year.

Here are just seven reasons to be happy on Blue Monday:

St Patrick’s Day falls on a Sunday this year which can only mean one thing… it’s going to be a three-day weekend.

2. It’s getting lighter every day

We’re well past the shortest day of the year – the Winter Solstice was 21 December – which means with every coming day, we get a bit more of that precious sunshine.

You may have a little extra insulation round your middle post Christmas but a) that doesn’t make you any less of a brilliant person, and b) it’s jumper season.

Everyone knows jumpers are the best of all the items of clothing.

5. Fyre Festival documentary is on Netflix

If you needed any more reason to stay in cocooned under blankets on the sofa, everyone’s talking about Netflix’s latest offering.

Fyre: The Greatest Party that Never Happened, aims to shed some light on how one man, co-founder Billy McFarland, managed to con thousands of festivalgoers, investors, and even his own employees, into believing in his fantasy well beyond the point where you might expect logic to start tapping them on the shoulder.

Even if you couldn’t care less about who wins and wears what, you can always count on awards season for gaffes and goss. And who doesn’t love celebrities embarrassing themselves?

7. It’s been a good sporting weekend

For the first time ever, all four Irish teams have qualified for European quarter-finals. Leinster, Munster and Ulster have all booked a place in the last eight of the Champions Cup, while a late Jack Carty try ensured that Connacht qualified for the knockout stages of the European Challenge Cup. And, further afield, Offaly man Shane Lowry won the Abu Dhabi HSBC Championship after a see-saw final-round battle with South African Richard Sterne.