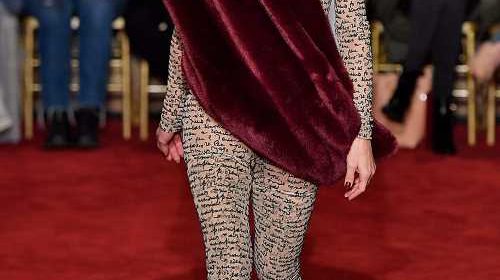 Selma Blair is reflecting on the early days of her battle with multiple sclerosis.

The actress, 48, was diagnosed with the difficult disease — in which the immune system eats at the nerves, causing pain and numbness in the body — in Aug. 2018. But one of the first major signs of her illness came earlier that year in February, when she walked in friend Christian Siriano's fashion show during New York Fashion Week.

"3 years ago. My dearest two pals came to watch the Siriano show. I walked that day. In the show. Noticing for first time, my leg was numb," Blair wrote on Instagram on Thursday, along with photos her friends took of her behind the scenes.

The Cruel Intentions star said she was internally freaking out as she walked.

"When I first stepped out. I couldn't feel the ground or how to lift my left leg," she said. "My brain was trying to compute. As I walked the runway, stunned." Blair said that despite her concern, the day was still a happy one.

"It hardly dampened my day though," she said. "[Her friends] Art and Carolyn shot these favorite frames of mine. In that incredible space in NYC. After the show was done. And what a show it was. The greats."

After that day in Feb. 2018, Blair's illness worsened. She began having difficulty speaking and lost the ability to fully use her left leg, and now requires a cane to walk.

But after undergoing treatments over the last few years — including a stem cell transplant and an "aggressive" course of chemotherapy to restart her immune system — she's starting to improve. In January, Blair joyfully announced that she's finally able to go horseback riding again, after her MS held her back from enjoying one of her favorite activities.

Blair had purchased a horse named Nibbles just before her diagnosis, and soon found that she was having trouble riding him.

"I couldn't feel my bum or left leg on my horse. The proprioception issues, inability to sit still, spasms, twitches. Jerks. Dystonia increased. I just laughed and thought getting older is impossible!" she wrote. "But it was MS and it got too big and I had to take a break until now."

With her illness improving, Blair is relearning how to ride.

"I am at the beginning. Still. And I cannot stop smiling. I cannot," she wrote. "When I am at the barn. I finally have the white unicorn I cannot believe is in my life and I want to rise to the occasion."