Aging and age-related brain disease do not affect women and men in the same way. The adult brain constantly generates new brain cells called neurons from stem cells, a process called neurogenesis. This process is important for learning and cognitive function which declines as the brain ages. Neurogenesis has been extensively studied in animals, but most studies have looked at male animals, raising the question of whether age-related decline in neurogenesis affects both sexes in the same way. To address this, researchers Sally Temple, Ph.D., Kristen Zuloga, Ph.D. and colleagues at the NY Neural Stem Cell Institute, U.S., have now compared neurogenic brain regions in male and female mice in a recent study published in Stem Cell Reports.

Researchers found that although numbers of newly generated neurons were comparable between the sexes, migration of newborn neurons, a process where new neurons move along pre-defined paths to their destination area in the brain, was much more disorganized in aged male mice compared to female mice. This difference could be attributable to the higher percentage of distorted blood vessels found in aged males. 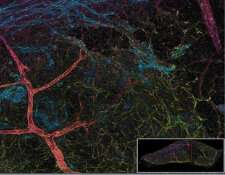