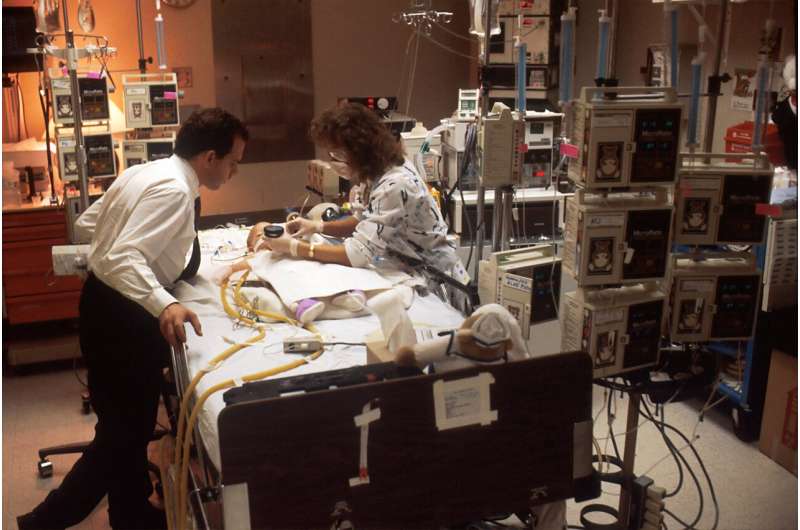 The surgeons in the Esophageal and Airway Treatment Center at Boston Children’s Hospital are pioneers in developing and refining innovative surgical approaches to long-gap esophageal atresia, a condition in which a child’s esophagus develops in two separate segments that can’t be easily connected with surgery.

Among these techniques are jejunal interposition and the Foker process. In the former, surgeons replace the missing section of the esophagus with a section of the small bowel, specifically the jejunum. It is used primarily to treat children who have already undergone failed repair of long-gap esophageal atresia or in whom the esophagus is no longer salvageable, due to factors like caustic ingestions and esophageal perforations. It is also used in children for whom the Foker process—a technique that relies on tension-induced growth of a child’s existing esophagus—is not viable.

Based on the comparatively high volume of these procedures performed at Boston Children’s, our surgeons have the expertise to continually improve the management of patients with esophageal atresia. They describe these advances in two recent studies.

For the first paper, published in the April 2021 issue of Surgery, Benjamin Zendejas-Mummert, MD, MSc, and his colleagues reviewed medical records from 55 children who underwent jejunal interposition at Boston Children’s between either 2010 and 2015 (historical cohort) or 2016 and 2019 (contemporary cohort). Specifically, they looked at the effect of “supercharging”—a type of blood flow enhancement or microvascular augmentation—on the risk of anastomotic leaks (anastomotic failure)

They found that the 41 patients in the contemporary cohort had a significantly shorter duration of medication-induced paralysis, intubation, ICU stay, and hospital stay than the 14 children in the historical cohort. They also had shorter operative times. Although the rates of anastomotic leak were very low and similar between the two groups, no patient who had undergone a supercharged jejunal interposition experienced such a leak.

“This is a major advance, since this type of anastomosis has been historically associated with significant leak rates,” explains Zendejas-Mummert. “We found that with the extra blood flow produced by supercharging, we were able to take our anastomotic leak rate to zero. Jejunal interposition remains our preferred type of esophageal replacement.”

Evolution of the Foker process

A second study by Zendejas-Mummert and his colleagues looked at outcomes of the Foker process in children with long-gap EA. In the traditional Foker process, surgeons connect sutures on the two ends of the esophagus to an external traction system and then increase tension on the sutures over time. This allows the two ends to grow enough in order to be able to perform an anastomosis or staged repair. Because of the external traction system, children undergoing the Foker process must remain sedated and medically paralyzed and on a ventilator during this time. More recently, Boston Children’s surgeons have developed a minimally invasive approach to the Foker process, which requires less time spent in the ICU, fewer pain medications and sedatives, and paralysis is not needed because the traction system is internal or inside the patient’s chest; however not all patients are candidates for this approach.

They found that patients in the contemporary group experienced significantly fewer leaks on traction, bone fractures, anastomotic leaks, and Foker failures than the patients in the historical cohort. Children who underwent the minimally invasive Foker process also had fewer days paralyzed, intubated, in the ICU, and in the hospital, with equivalent anastomotic outcomes. The findings were published in the February 2021 issue of the Journal of Pediatric Surgery.