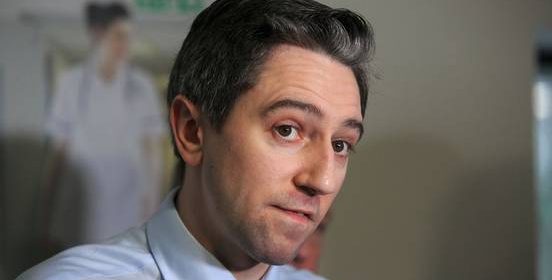 Health Minister Simon Harris last night said a protest outside his home had been “very frightening” for his family.

The protest at the minister’s Co Wicklow house yesterday afternoon by a group styling themselves ‘Fingal Battalion Direct Action Group’ sparked condemnation from across the political spectrum.

It came as Mr Harris remains in the eye of a series of continuing political storms, including the nurses’ strike and a huge over-spending row over the new children’s hospital.

He is due to apologise to the Dáil this week over information he provided on the cost of the hospital.

A statement posted online attributed to the protest group claimed it was against “corruption, austerity and evictions” and alleged that Mr Harris had “neglected” his position.

Speaking to the Irish Independent last night, Mr Harris said he did not want to comment too much about the protest. He was in the house with his wife, Caoimhe, and their three-week-old daughter, Saoirse, at the time.

“Obviously my number one priority is the safety and the well-being of my family. It was obviously a very frightening experience for them. Thankfully everyone is OK but a little bit shook,” he said.

But Mr Harris also made it clear that the action at his home breached an important line in politicians’ and their families’ privacy and security.

“Protest and demonstration have a legitimate role in Irish society but I think most people would agree what happened outside my home today is unacceptable,” the Health Minister commented.

Gardaí were called to the Harris family home after the protesters stationed themselves there around 3pm.

TDs from all political quarters have rallied against the protesters, condemning the actions as “utterly unacceptable.”

Several ministerial colleagues took to social media to voice their condemnation of the demonstration and support for Mr Harris and his family.

There were also strong condemnations from Fianna Fáil, Sinn Féin, and the Independent Alliance – all of them took serious issue with an intrusion at a politician’s family home.

But the self-styled protest group remained stridently critical of the Health Minister.

“He’s not even qualified for this job, we’re all aware of the smear test scandal, thousands of patients on trolleys, medical cannabis bill, the extravagant costs of the new children’s hospital and the nurses’ strike, who we fully support,” the group also said online.

The protest group made no response to requests by the Irish Independent for any additional comment.

Gardaí later said the group left the scene peacefully, shortly after 3.30pm, “and enquiries will be carried out”.

Mr Harris thanked An Garda Síochána for its assistance and in ensuring his wife and daughter’s safety.

One neighbour in Mr Harris’s housing estate told the Irish Independent that neighbours on the road were “disgusted” at the protest and said the group would find very little support for it. The neighbour said the protesters were there for a couple of hours.

Protests at politicians’ homes had until recently been rare. But in 2013, protesters, some wearing skeleton masks, picketed outside then Taoiseach Enda Kenny’s home in Castlebar, Co Mayo.

Just 10 days ago it emerged that a self-styled anti-eviction group aimed to occupy key politicians’ homes and stage mock evictions. The move sparked a Garda alert.

“Everyone is entitled to peace and security with their family in their own home. Putting yourself forward for public service does not take that right away,” he added.

Culture Minister Josepha Madigan hit out at the protest online, saying “and we wonder why people are put off being a politician? Go figure”.

The Independent Alliance also condemned it, stating it was “utterly unacceptable”.

Sinn Féin health spokesman Caoimhghín O Caoláin said: “Understanding the deep concerns that people have across the country at the state of our health service, that said, I would say that in any and all circumstances, mounting a protest at the home of a government minister or anyone in public office [under which] the family are clearly going to be discommoded is inappropriate.”