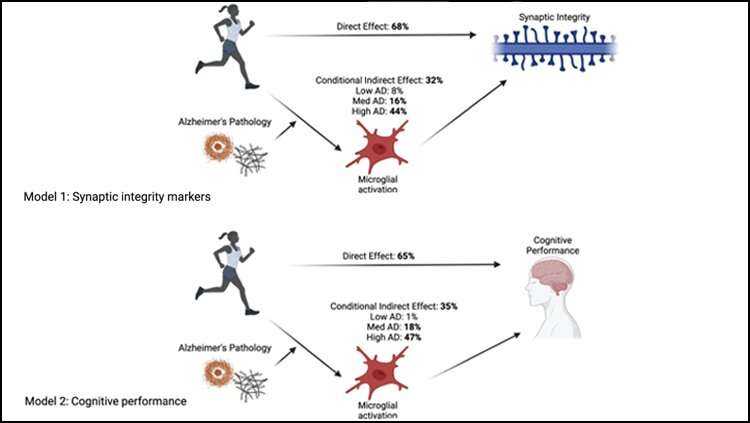 No one will disagree that an active lifestyle is good for you, but it remains unclear how physical activity improves brain health, particularly in Alzheimer’s disease. The benefits may come about through decreased immune cell activation, according to new research published in JNeurosci.

Microglia, the brain’s resident immune cells, activate to clear debris and foreign invaders from the brain. But too much activation can trigger inflammation, damage neurons, and disrupt brain signaling. Exercise helps reduce aberrant activation in animals, but that link hadn’t been established in humans.

Casaletto et al. examined the relationship between physical activity and microglia activation in 167 older adults across the spectrum of cognitive aging (majority nondemented) as part of the Rush Memory and Aging Project. The participants wore activity monitors 24 hours a day for up to ten days straight before annual cognitive exams. The researchers measured microglia activation and Alzheimer’s disease (AD) pathology in postmortem brain tissue analyses. Greater physical activity was linked to lower microglial activation, particularly in the inferior temporal gyrus, a brain region hit the hardest by AD. Physical activity had a more pronounced effect on inflammation in people with more severe AD pathology.