A new report shows US health spending has hit a record level, attributed mainly to the country’s reply to COVID-19. 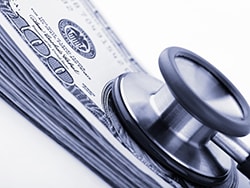 The share of the economy devoted to health also increased sharply, rising to 19.7% of gross domestic product (GDP) in 2020 from 17.6% in 2019. This large jump was partly due to a 2.2% decline in GDP last year. Nevertheless, the ratio of health costs to GDP was the highest ever reported since the government began compiling data on health spending in 1960.

A news release about the report from the Centers for Medicare & Medicaid Services (CMS) attributed the sharp spike in health costs to “the 36 percent increase in federal expenditures for health care that occurred largely in response to the COVID-19 pandemic.”

The provider assistance programs created in response to the COVID-19 pandemic included the Provider Relief Fund ($122 billion in 2020) and the Paycheck Protection Program ($53 billion in 2020). Both of these programs were designed to make up for providers’ lost revenue and increased costs resulting from the pandemic.

Meanwhile, the federal government increased its share of Medicaid payments while requiring state and local governments to maintain Medicaid enrollment as a precondition for receiving the higher payments. Largely as a result, federal Medicaid spending leaped 18.8% in 2020, compared to 4.1% growth in 2019. The federal share of the Medicaid program reached 69%, the highest level in the program’s history.

When federal spending on public health, COVID relief programs, and some other categories are removed from NHE, total health expenditures increased just 1.9% in 2020, a drop from 4.3% growth in 2019. This slowdown in personal care spending was “due to less use of medical services and goods in 2020,” a statement from Health Affairs notes.

According to the report in Health Affairs, “This was a function of less use of medical services and goods in 2020, both by those covered through health insurance as well as by those paying directly out of pocket.”

Out-of-pocket costs for consumers dropped 3.7% to $388.6 billion, comprising 9% of total NHE. By comparison, out-of-pocket expenses increased 4.4% in 2019. This decline in out-of-pocket spending, the first since the 2009 recession, was driven by decreased use of healthcare services and little or no cost-sharing for COVD-19 testing and treatment.

Spending on private health insurance declined 1.2% to $1.15 trillion in 2020, accounting for 28% of NHE. Private insurance spending on medical goods and services dropped 3.5%. This was mainly because of pandemic-related reductions in healthcare use, particularly for some elective procedures, along with economic shutdowns.

In a news conference about the report, CMS experts noted that the net cost of private health insurance — which includes administrative costs and profits — surged last year because premiums had been set prior to the pandemic and utilization was much lower than expected, due to patients avoiding healthcare settings. Because of a government regulation that requires a minimum amount of premium revenue to be spent on patient care, they said, health plan members should expect rebates.

Fee-for-service Medicare spending accounted for 55% of program expenses last year, down from 61% in 2019. Medicare private health plan spending — mostly in Medicare Advantage plans — accounted for the other 45% of total Medicare expenditures. Private plan spending grew at a rate of 17.1%, compared to 15.3% growth in 2019. The rapid growth in private health plan expenditures stemmed from increased enrollment in Medicare Advantage plans. The growth of per-enrollee spending in these plans remained steady at 6.9%, about the same as in 2019.

Medicaid spending jumped 9.2% to $671.2 billion in 2020, accounting for 16% of NHE. This spending increased three times faster than the growth rate in 2019. The increase resulted partly from enrollment growth and partly from increased Medicaid supplemental payments to hospitals and mental health facilities.

Hospital spending grew 6.4% to $1.3 trillion in 2020, representing 31% of overall spending. This growth rate was just slightly higher than in 2019. It reflected federal COVID relief funding and faster increases in Medicaid spending. Out-of-pocket spending on hospital services dropped 12.6% in 2020 after increasing 8.3% in 2019.

Spending on physician and clinical services grew 5.4% in 2020. This was less than the increase in hospital spending, but it followed a slower increase of 4.2% in 2019. Again, federal relief programs were responsible for a large portion of this spending growth. Another factor was the rise in spending on independently billing labs due to COVID-19-related testing.

Retail prescription drug expenditures were not affected by the federal relief outlays. Prescription drug spending increased 3% to $348.4 billion in 2020, comprising 8% of overall health spending. The rate of growth was less than the 4.3% increase in 2019 mainly because of lower out-of-pocket spending and fewer prescriptions written by providers. Drug prices also fell slightly for the third time in as many years.

Did the Feds Spend Too Much?

During the press conference, when asked whether the federal government had spent too much on its relief programs, Aaron Caitlin, a co-author of the CMS report, said that policy analysis was not part of his team’s remit.

“But 2020 was like no other year that we’ve seen in the history of the national expenditure accounts,” he continued. “There were so many pandemic-related challenges to the healthcare sector, including economic shutdowns, reduced utilization, lower patient care revenue, shortages of medical equipment and supplies, and increased costs for treating COVID patients.

“As we highlight in the report, the federal government played an important role in helping to support providers as they dealt with lower revenue and increased costs, as well as public health issues…. When we remove the categories that had that [government] spending, you can see the differences and the trends for what’s left in NHE when you take increased federal funding out.”

When asked what the data portend for the future, Caitlin demurred, noting that CMS is preparing its annual 10-year projection report. He added, “When we look at things like the increased share of GDP [spent on health] and the increased share of the federal government [in health spending] in 2020, these were one-time effects that we wouldn’t expect to have a long-lasting effect. But there will be effects [of the pandemic] going forward.”

Ken Terry is a healthcare journalist and author. His latest book is “Physician-Led Healthcare Reform: A New Approach to Medicare for All.”