Out of the Pandemic, Chances for Another Future

This article is part of a series on resilience in troubled times — what we can learn about it from history and personal experiences.

About a year ago, just as the pandemic was hitting New York City, St. John Frizell and his two partners were readying for the grand reopening of Gage & Tollner, a newly renovated, 140-year-old restaurant in Downtown Brooklyn. One day before the March 15 opening — for which the three partners had spent almost a year and a half preparing — they made the difficult decision not to open.

Mr. Frizell retreated to his home in Brooklyn. “The only sounds in the street were ice cream trucks and ambulances,” he recalled. Anxious about going to the supermarket but needing groceries for himself and his son, he reached out to one of his vendors, Lancaster Farm Fresh Co-op, to see about having some food delivered. Lancaster was delivering boxes of seasonal produce, but needed an order large enough to be worth the trip. So Mr. Frizell, who suddenly had downtime, did something he hadn’t done in a while: He reached out to his neighbors.

“I posted something about it in a local Red Hook group on Facebook and got a big response,” he said. “I thought, OK, I can set this up for all of us.”

Mr. Frizell also owns Fort Defiance, a beloved Red Hook bar that he opened in 2009 and that also closed in March; it became the order pickup spot. Neighbors began asking about other grocery items, so Mr. Frizell added things like milk, eggs, cheese and meats. “A lot of people in the neighborhood began looking to us for their staples,” he said.

By midsummer, Fort Defiance had permanently become a general store, with new signage painted over the old “Cafe & Bar.” This March, Mr. Frizell started a crowdfunding campaign to help the store move to a bigger space one block away. (Gage & Tollner, which has been open for takeout since mid-February, plans to open for indoor dining on April 15.) The whole experience made Mr. Frizell aware of how much richer his life is when he is connected to the community. “Reaching out and asking what people needed felt really good, like I was doing what I could to help,” he said. “It felt very purposeful.” 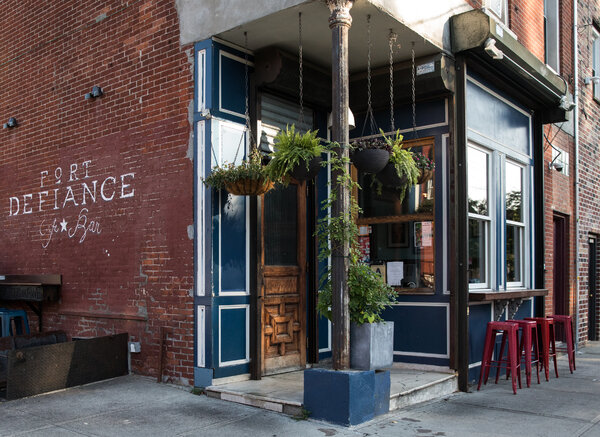 When life is disrupted by crisis, as it has been this past year, some people see opportunities — for change, action, introspection — they might not otherwise. The pandemic has caused many to question the way they live and what is important to them. That’s because a crisis often helps us develop a wider perspective on our lives, said Amit Sood, a physician and executive director of the Global Center for Resiliency and Wellbeing in Rochester, Minn. And that allows us to reframe what we see.

Of course, for many people struggling to make ends meet or lacking savings, a big life change — or even just a shift in perspective — may not be possible. But for those fortunate enough to have the psychological space and economic security, this kind of reframing can present real possibilities for change.

“When people focus on what is right within what seems wrong in their life (for example, the car has a flat tire but isn’t totaled), that can lead to seeing things that present themselves as opportunities,” he said.

This is not the same thing as positive thinking. Instead, said Rick Hanson, a clinical psychologist and author of “Resilient: How to Grow an Unshakable Core of Calm, Strength, and Happiness,” it’s about seeing openings in life for change and transformation, even in difficult circumstances. Mr. Hanson said that although we often think of opportunities as things that exist outside ourselves, like a new job or moving to a different city, opportunities for growth and change exist inside us, too.

Justin E.H. Smith, for example, a philosopher, historian and professor at the University of Paris, made subtle but important changes this past year. Mr. Smith describes himself as an introvert with a tendency to lead a rigid life, doing the same things in the same way every day. The pandemic forced him to restructure his daily life and soften his rigidity.

“I’m aware of the contingency of these new routines now,” he said, “and my power to restructure them if they don’t suit.” Mr. Smith, 48, also admitted that he used to feel too old to try anything new. But the pandemic gave the professor permission to be a novice again. “It didn’t feel shameful any longer for me to be a beginner.”

So after some research, he opened an online brokerage account. He also took up guitar (and now plays every day) and in August, decided to start a paid subscription newsletter on the digital publishing platform Substack, where he writes about the philosophical dimensions of culture, science and politics, and the ways they are changed (and distorted) by technology.

Absent the pandemic, Mr. Smith probably never would have considered it, but for the first time in his professional life, he thought about diversifying his income. “I’m thinking ahead in a precarious moment,” he said.

Those sorts of moments often shake up all that we believe to be true about the world, and that is what leads to personal growth. “These are core beliefs we have about the world that we generally don’t question, such as how vulnerable or safe we are, how much control we have over things or what our identity is,” said Richard Tedeschi, who, along with fellow psychologist Lawrence Calhoun, coined the term “post-traumatic growth” in the 1990s, naming this phenomenon.

We use these assumptions about the world to make decisions every day and to plan for the future. When a crisis hits, we often have trouble believing and accepting what is happening because it disrupts those core beliefs. “That is what qualifies as trauma,” Dr. Tedeschi said. “And it can set in motion major changes in people’s lives.” In fact, one of the five areas where growth and change occur after a crisis is in recognizing new possibilities.

That is what happened to Elaine Mazanec. In mid-2019, she was a co-owner of a public relations agency in Washington and the mother of a 2-year-old when her husband died suddenly. As someone not used to asking for help, she was forced into a position of vulnerability.

“I allowed myself to be cared for in a way I hadn’t before,” Ms. Mazanec said. “I had so much support. It wasn’t comfortable for me, but it was what enabled me to find my footing after the loss.”

Just as she was getting back into a normal routine, the pandemic descended. “For the first few weeks, I felt similar to when I lost my husband, like the rug got pulled out from under me,” she said. In the weeks that followed she became more reflective, appreciating the positives in her life, especially the security and support she has (and that so many others do not).

“I think sometimes when we’re super busy, we don’t get a chance to zoom out and see the bigger picture,” Ms. Mazanec said. “I realized that what had felt the most meaningful for me in the last two years was having the support of others to help me through a terrible loss, to help me process it.”

Ms. Mazanec decided she wanted to be a person who supports others going through difficult times, so she started looking into graduate programs in social work. Most deadlines for applying had already passed, so when she learned that the University of Maryland School of Social Work — her first choice — had extended its deadline because of the pandemic, she took it as a sign she was on the right path.

Now in her second semester of the program and doing her fieldwork in an elementary school, Ms. Mazanec says she feels that the work has real purpose and is closely aligned with her values.

“The loss I experienced, that tragedy, really changed me,” she said. “And then the pandemic gave me an opening. It all came together in a way I couldn’t have predicted, but I know I’m where I’m supposed to be.”

Eilene Zimmerman is author of the memoir “Smacked: A Story of White-Collar Ambition, Addiction and Tragedy.”