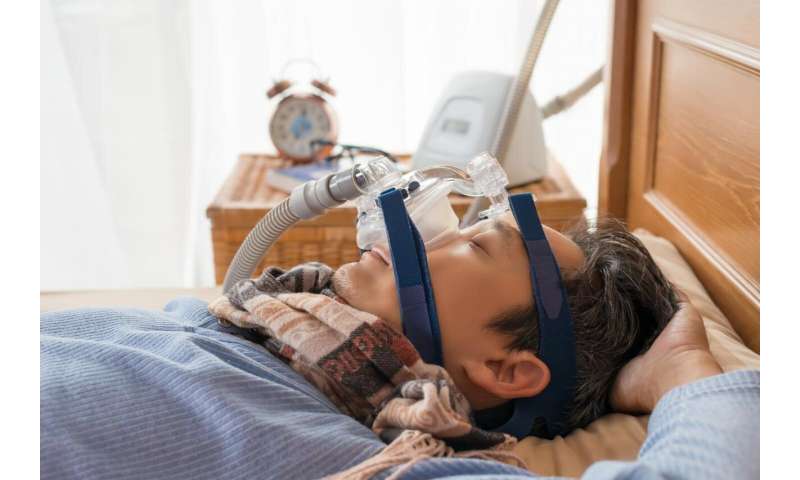 Certain traits may define a type of obstructive sleep apnea that can be effectively treated with an oral appliance, according to new research published online in the Annals of the American Thoracic Society.

With OSA there are times during sleep when air cannot flow normally into the lungs. The collapse of the soft tissues in the back of the throat or tongue usually causes the airflow obstruction.

Continuous positive airway pressure, or CPAP, is considered the gold standard for preventing the obstruction by blowing air through a mask into the nose and throat. However, many patients have trouble sleeping with CPAP. For these patients, an oral appliance that moves the lower jaw forward to prevent the periods of obstructed airflow is often an alternative.

In “Polysomnographic Endotyping to Select Obstructive Sleep Apnea Patients for Oral Appliances,” Ahmad A. Bamagoos and colleagues identify five traits that appear to determine the effectiveness of an oral appliance in treating OSA.

“Sleep apnea is not all the same, but we only recently developed ways to look at a sleep study and determine what traits cause the condition in different patients,” said senior author Scott Sands, Ph.D., assistant professor of medicine at Harvard Medical School and Brigham and Women’s Hospital in Boston. “Since oral appliances work by improving the collapsibility of the upper airway, patients without really severe collapsibility are more likely to benefit from an oral appliance, while those with sleep apnea caused by other traits, such as exaggerated reflex responses to drops in oxygen levels, are less likely to benefit.”

The authors looked at two traits related to the upper airway: collapsibility and muscle compensation. The researchers found that patients without severe collapsibility benefitted more from the oral appliance than those without this trait. Those with a weaker reflex response of the throat muscles that act to maintain an open airway (lower muscle compensation) also benefitted more than those with a stronger reflex response. Patients with very mild collapsibility, indicating deficits in other traits, responded less well.

Based on these five traits, oral appliances were predicted to be effective in treating sleep apnea in more than half (61 percent) of the participants. Patients in this group experienced a 73 percent reduction in the Apnea-Hypopnea Index, which is the number of breathing pauses per hour lasting 10 seconds or longer. (Apnea means no airflow and hypopnea means reduction in airflow). With an oral appliance, they had just eight apneas/hypopneas per hour.

The other patient group experienced a smaller reduction in the Apnea-Hypopnea Index and had twice the number of breathing pauses remaining with the oral appliance.

Based on these findings, the authors write that, if their results are upheld in future studies, an oral appliance could be considered, along with CPAP, as a first-line therapy for treating a certain type of OSA.

“While CPAP is great for some, there remains a large group of patients who really struggle with it,” Dr. Sands said. “For these folks, this study highlights the potential benefit of measuring the underlying causes of their sleep apnea to estimate whether an oral appliance might be an equivalent or better choice over CPAP for the treatment of their sleep apnea.”