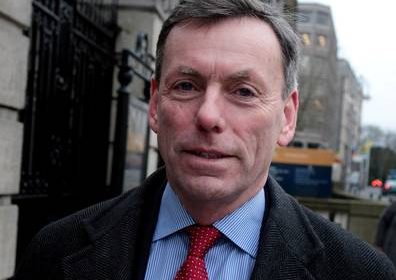 The man due to take the reins of the Children’s Hospital board is no stranger to fielding tough questions on large infrastructure projects.

Fred Barry spent a decade at the helm of the National Roads Authority (NRA) at a time when the Port Tunnel project had a €200m overspend.

Health Minister Simon Harris yesterday announced Mr Barry will take over as chair of the board of the National Paediatric Hospital Development Board, which is responsible for delivering the National Children’s Hospital (NCH).

Mr Barry, a civil engineer graduate who also qualified as a barrister, spent a decade as the chief executive of the NRA, taking up that role in 2005.

In 2008, he was the third highest paid public servant in the country after President Mary McAleese and then-HSE chief Brendan Drumm, earning a salary of €250,000 and was entitled to a bonus of up to 50pc.

Prior to being appointed to the NRA, he worked in the private sector and built up extensive experience managing construction projects abroad.

Mr Barry will spend the first weeks in his new role on the Children’s Hospital board seeking to explain the runaway spending that relates to contracts signed before he was involved.

Similarly, he faced tough questions on the €200m overspend on the Port Tunnel. The tunnel opened at the end of 2006, a year after he was appointed head of the NRA.

In his first year as chief executive of the NRA the scale of that overspend emerged and he found himself before the Dáil Transport Committee. He said the rise in costs was due to the type of design and the build contract that had been signed.

In its first months there were a number of teething problems in the tunnel, including unscheduled closures caused by either systems issues or incidents in the tunnel, and which saw Mr Barry before a Dáil committee again.

But it was the decision to introduce e-tolls on the M50 that saw Mr Barry faced with the most significant backlash from the public amid fears it would lead to higher tolls for those who did not go electronic. However, he gave that short shrift telling a Sunday newspaper “it’s the modern way of doing it”.

In the years leading up to his tenure at the NRA the body was no stranger to huge overspending, but this was curtailed after 2008 by the recession.

Taoiseach Leo Varadkar yesterday said that, during his time as transport minister from 2011 to 2014, he worked with Mr Barry on delivering the national roads programme which he said came in “broadly on time and on budget”.

Last night, Mr Harris said Mr Barry’s experience would be “invaluable to ensuring the next phase of this project is delivered for future generations”.

Attempts to contact Mr Barry through the press representatives for the Children’s Hospital board and the Department of Health were unsuccessful.