More than 20 California cities have unhealthy air quality from wildfires

Thick plumes of smoke from the devastating wildfires in California are being blamed for poor air quality across large parts of the state, raising health concerns for millions of people. The Camp Fire, which has killed at least 79 people, continues burning in Butte County, north of Sacramento, while the Woolsey Fire has destroyed thousands of homes and businesses in the Malibu area.

This kind of air pollution is full of tiny particles that can cause health problems ranging from temporary breathing discomfort to the exacerbation of long-term medical issues like heart and lung diseases.

As of Monday, more than 20 California cities were listed as having an air quality index of “unhealthy.” Residents have been advised to stay inside as much as possible and avoid exercising outdoors. 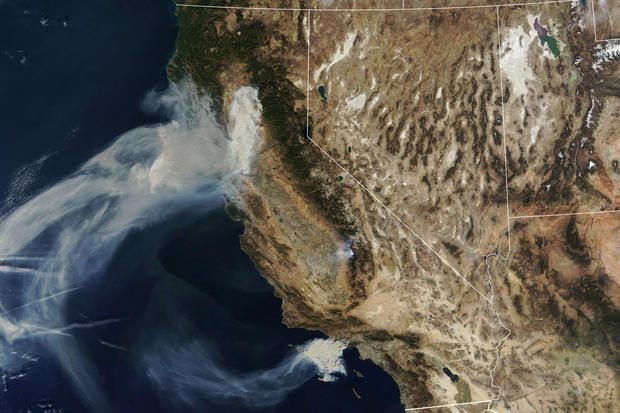 A NASA satellite image shows smoke spreading west from the Camp Fire in Northern California and the Hill and Woolsey Fires in Southern California, on Nov. 9, 2018.

Short-term, breathing in the smoke-filled air can lead to respiratory discomfort, and inhaling the tiny particulates in the air affects more than just the lungs

“Once it gets past the air blood barrier in the lungs it can go to almost any organ in the body because it travels through the blood stream,” Professor Ed Avol, Acting Director of the Environmental Health Division in the University of Southern California Department of Preventive Medicine, told CBS News.

For people with pre-existing respiratory conditions such as asthma, the smoky air can exacerbate their symptoms. Avol also notes that there can be a lasting impact on unborn babies and growing children from prolonged exposure.

“For pregnant women exposed, the developing fetus may be affected by this… and in terms of children, somehow perverting or shortening the maximum growth span you’d want to see for developing organs,” Avol said.

One of the reasons the Camp Fire has caused such severe air pollution is because of its duration. The blaze erupted on November 8 and experts say it likely won’t be fully contained until the end of the month.

“The other issue is the exposed population. The way the wind’s been blowing, it’s been blowing it right across through Sacramento and right to the San Francisco Bay where we have literally millions of people,” Avol said.

He also notes that the smoke contains toxins beyond just traces of burning wood from the wildfire. “It’s also homes and buildings and the plastics and the asphalt shingles and furniture and everything else that was in the homes that’s now up in the air combusted. So there’s lots of chemicals in the air,” Avol said.

Although the Woolsey Fire in the southern part of the state hasn’t been as widespread, its smoke enveloped a large part of Los Angeles and the health risks there would be similar.

For people who need to spend time outside, experts recommend wearing a N95 face mask. “Just putting a rag over your face really won’t accomplish much, Avol said.

Staying inside, closing windows, and running air conditioners and your car’s ventilation system on recirculate will also help to somewhat reduce exposure.