Men 'should be allowed to donate sperm after death'

Sperm donation after death should be allowed in the UK to plug growing gap in supplies, say scientists

Fertility clinics should be allowed to take sperm from dead men as well as accepting donations from living people, scientists argue.

Organ donation is already widespread and, from April, everyone in England will automatically become an organ donor.

Sperm can – and should – be donated in the same way, according to experts from the University of Leicester and Wythenshawe Hospital in Manchester.

A dead man’s sperm has been proven to still be able to impregnate a woman if it’s taken even two days after he has died.

And collecting the sex cells could help to plug a short supply of donated sperm and help more people to have babies, the researchers said.

But critics have described the idea as ‘impractical’ and unlikely to boost the number of donors. 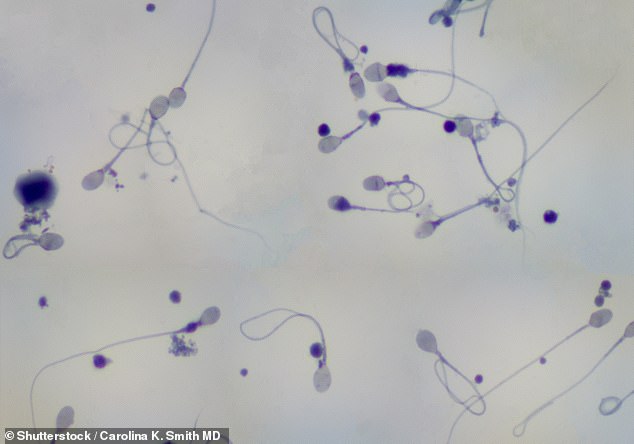 The claim was made by Dr Nathan Hodson, from the University of Leicester, and Dr Joshua Parker, from Wythenshawe Hospital.

They wrote: ‘If it is morally acceptable that individuals can donate their tissues to relieve the suffering of others in “life enhancing transplants” for diseases, we see no reason this cannot be extended to other forms of suffering like infertility, which may or may not also be considered a disease.’

Dr Hodson and Dr Parker said it could be ‘cumbersome’ to donate sperm while living and that men might be more willing to have it done to them after they have died.

If a man is dead his sperm can be surgically removed from the testicles or taken by ‘electroejaculation’ – electrically stimulating the prostate to trigger ejaculation.

Sperm donation is used to help people start families when they can’t have children of their own naturally – if, for example, a male partner is infertile, if both parents are women, or if the mother is single.

Clinics in the UK are not allowed to pay men to donate sperm, except up to £35 to cover expenses such as travel. More may be offered if accommodation is necessary.

A law change in 2005 means men can no longer donate anonymously and must agree for any children born from their sperm to be able to find out who they are after they turn 18.

However, a donor father will never be required to parent the child or pay child support.

Sperm donors are usually aged between 18 and 41, although older donors may be allowed in some cases.

A donor will visit a fertility clinic once a week for between three and six months to make a complete donation – at each visit the donor will ejaculate into a cup and their sperm be frozen.

Donated sperm cannot be used to create any more than 10 families per donor, and the donor is allowed to withdraw his consent at any time until the sperm has been used.

Electroejaculation is already used to try and treat men who are unable to ejaculate, and also to take semen samples from animals.

Men do not get paid for donating sperm in the UK, and any children they father are allowed access to their name, date of birth and home address on turning 18.

But the UK is so short of sperm donations it imports thousands of semen samples from abroad every year – some 3,000 from Denmark and 4,000 from the US, according to the Government.

Donor sperm is used either in IVF or a process called intrauterine insemination, in which the sperm is injected into the woman’s vagina as it would be during sex.

Dr Hodson and Dr Parker said sperm taken after death would have health checks done to make sure it was healthy and the genes were acceptable.

‘This may be because of the loss of donor anonymity and the demands of donating sperm which include health tests, counselling and intimate discussions, and travel to clinics to make donations weekly for three to six months.

‘There are barriers to donating sperm in life that may prevent some men acting on their desire to help others or see their genes continue into future generations through donation.

Experts in the field, however, were unconvinced.

Dr Virginia Bolton, treasurer at the British Fertility Society, said: ‘This approach is at best impractical, and at worst likely to yield a negligible number of new sperm donors.

‘What we would like to see is a determined and realistic dedication of adequate resources towards publicising the need for sperm donors, and towards making it easy for potential donors to understand how to make their generous gift a reality.’

Professor Allan Pacey, from the University of Sheffield, said he felt ‘very uncomfortable’ with the idea and that living donors should be prioritised.

‘This is a very well argued paper but one that I find myself strongly disagreeing with,’ he said.

‘Given the distance we have travelled in terms of recruiting donors who are willing to be identified to donor conceived people, it feels like a backward step to then recruit donors who are dead and therefore they will never have the opportunity to meet.

‘I’d much rather that we invested our energy in trying to recruit younger, healthy, willing donors who stand a good chance of being alive when the donor conceived person starts to become curious about them, and would have the opportunity to make contact with them without the aid of a spiritualist.’

Dr Hodson and Dr Parker’s letter was published in the Journal of Medical Ethics, by the British Medical Journal.