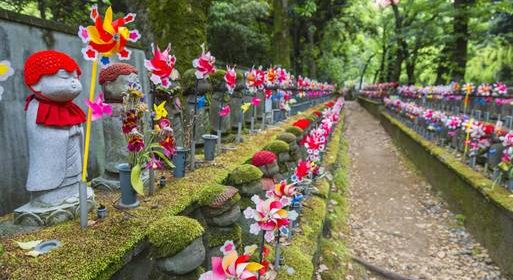 In her life as a journalist, Patricia Danaher, who is originally from Cork, covered politics in Ireland, rubbed shoulders with the A-list in the Hollywood Hills, and is the only Irish juror on the Golden Globes as a member of the Hollywood Foreign Press Association.

Her photo album is like a who’s who in the world of entertainment over the past decade, which she has covered for years from LA. But the latest phase of Patricia’s working life has taken her on a voyage of discovery that she hopes will help lighten the burden of grief that families bear when they lose a baby through stillbirth or miscarriage, or are grieving unsuccessful IVF.

As a 20-something, Patricia lived in Japan and was struck by the old Japanese tradition of remembering a baby who died in pregnancy. She explains that the first time she spotted the little Jizo statues, which often line wooded paths or public gardens and cemeteries, she didn’t know what to make of them.

Delving a little deeper Patricia, who is now in her early 50s, found out that the small stone figurines, often dressed in red bibs and caps, were left to honour and grieve those babies lost through miscarriage, stillbirth and termination. The statues are believed to be protectors of lost children and unborn babies in traditional Japanese Buddhist teachings. It is believed that as the babies did not have the chance to build up good karma on earth, Jizo helps smuggle the children into the afterlife in the sleeves of his robe.

It was when she went back to college – completing a Master’s degree in Mythology, Ritual and Jungian studies from the Pacifica Graduate Institute – that the small figures with the red caps came back to Patricia.

Her own experience of miscarriage and the heartbreak of several failed IVF attempts led her to look again at this very unique Japanese art of grieving. Now she hopes that the practice could spread from Japan to the West, to provide comfort to those who experience the loss of a baby in pregnancy.

In this country, around one in every four pregnancies ends in miscarriage and the HSE says the figures show that 360 stillbirths are registered in Ireland every year.

And while Patricia says everyone’s experience of grief is unique and no two people will react in the same way to a loss, many find it difficult to know how to move on and where to seek solace and comfort. She says creating a secular ritual around the Jizo figure may, for some, be a way to honour the life that never realised its potential.

“Ritual is a hugely healing thing,” says Patricia. “We engage in it much more often that we think. It’s not just weddings and funerals – so many things from sport to concerts, to court appearances, so much that we do is encased in the metaphor of ritual.

“Everyone understands protocols and traditions in ritual without necessarily thinking about it. The Irish wake is one of the great examples of a healing ritual as both celebration and mourning.”

After graduating, she started to offer these secular rituals to people in the US, who wanted to honour their baby. And in carrying out these rituals, she says, she has come across the most amazing stories of the grief people have carried, sometimes for decades.

She recalls meeting a family who had experienced a miscarriage many years ago. The couple’s 12 year-old son wrote a letter as part of the family’s ritual to commemorate the sister he had longed for, crying as he read his letter aloud, lamenting that he never got to meet her.

On another occasion, only a few weeks ago, she met an artist who knew nothing about this tradition and who held a Jizo statue in his hand for only a minute before breaking down in floods of tears. He shared the fact that his wife had experienced six miscarriages and that their dream of having a “big, noisy house full of kids” was shattered by recurrent pregnancy loss. Thirty years of his cumulative grief came tumbling out, says Patricia.

Her rituals have become what she calls a marrying of her own experience and studies with what the Japanese have been doing for the last 60 years or so.

“I come to clients’ houses and I make a little shrine in their garden. It’s built around the Jizo statue combined with elements of nature, like a tree or a rose bush or whatever plants might be meaningful. We create a sacred space that people can visit and tend to. People are finding it really healing and I’m getting amazing responses. The family can customise the ritual in their own way, writing letters or singing songs with the centrepiece as the Jizo statue. Again and again, everyone tells me ‘this is so needed’,” she says.

“I think men’s grief can often get forgotten. I particularly try to reach out to men’s groups and I encourage the inclusion of grandparents, uncles and aunts in the rituals, who also have their pain at the loss of the baby”.

While she’s currently engaged with doing the rituals on a private basis, Patricia would love to see the idea be embraced at a more public level whereby small areas of public spaces would be given over to these kinds of memorials. Some land has been donated in Los Angeles to create one of these spaces and Patricia is consulting with a town in New Hampshire that wants to create such a space in a public park.

“When I heard about the Irish government’s plans to plant a million trees over the coming years, I thought it would be a wonderfully healing thing culturally, if a small space could be created in this for babies who died in this country, including Ann Lovett and her baby, the Tuam babies and other such tragedies.”

She believes that by honouring loss in this way, the way the loss of a baby through miscarriage or stillbirth could become more normalised within the culture and in conversation, people could recognise that it’s a part of life instead of being taboo.

“In addition to the grief, people often have a sense of guilt or a shame. It’s a combination of these feelings that people get from society, which often thinks you should ‘just get over it and have another baby’. Sometimes people are just not that understanding. There’s something about the loss of a baby that nobody has ever met, or this life that was never known or got to be realised, that can cause so much pain,” she says.

Acknowledging that this is a suffering that affects so many people, would go a long way to healing, especially for those who are not able to talk about how the loss of their baby affected them, Patricia believes.

She describes the experience as being like “the death of a dream” that isn’t given voice to in the society we live in. “Having a space to honour these lives that were lost, that meant so much to the families waiting for them, would go a long way towards healing”.

“These are secular rituals. I’ve chosen these Japanese figures because that’s where the idea began, but of course other icons could also be used. The idea is to help people compost their grief and to turn it into something that’s living and that’s part of nature, that can be externalised and tended to,” she says.

For more information, see ritualstomourntheunborn.com This week marks Baby Loss Awareness week, an international event which seeks to raise awareness of the issues affecting families who have experienced a loss of a pregnancy or baby. For INM’s dedicated section, see independent.ie/babyloss