Labour court may step in to try resolve nurses' strike 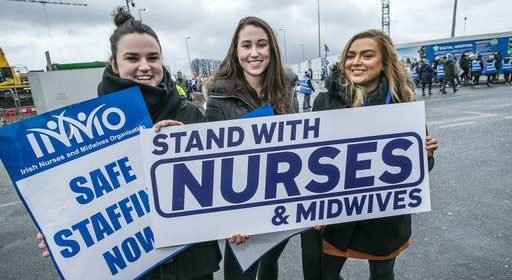 Intense efforts were understood to be underway this evening to get a formula which would allow the Labour Court to make an effort to resume talks on the bitter nurses’ strike.

It is understood that an intervention could potentially be made to get the Irish Nurses and Midwives Organisation and the HSE back in talks.

Nurses are demanding a pay increase which the Government has said could cost €300m.

Public Expenditure Minister Paschal Donohue said today that pay could not be part of the talks and he would have to respect the other public servants who were adhering to its conditions.

More than 35,000 nurses took the picket line again today causing widespread chaos in hospitals and in the community.

The fear is that the health service will be plunged into chaos for three days next week as nurses stage three consecutive days of strikes.

It’s feared this will lead to a dangerous backlog of patients, several of whom are very ill, who will wait weeks for their appointment to be rescheduled.