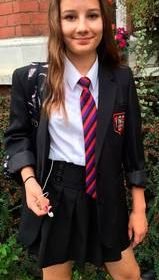 I don’t often watch the BBC news, but I did on Sunday night. They were following up on an item from a few days previously about the death of Molly Russell. Molly died by suicide, aged just 14, and her dad has been speaking about his belief that her suicide was linked to her use of social media, and Instagram in particular.

Molly’s social media history showed that she had been looking at graphic and explicit posts on Instagram about self-harm and suicide. We’ll never know the reason why Molly killed herself, or to what extent her social media use contributed to it, but it must sound warning bells for any parent of a teenager. It was the kind of news item that strikes fear into all of our hearts.

In recent months, I’ve been asked to give more and more presentations to parents about internet safety, and the impact of social media on children. I was in Blennerville in Kerry before Christmas giving such a talk. You might remember the national school there began an initiative, in conjunction with the parents, where the sixth-class pupils were asked to forgo social media and their phones. I was invited to Gaelscoil Uí Fhiaich in Maynooth just this month, as they are rolling out a similar initiative and extending it down to second class.

In both schools, I was really impressed by the level of parental support for the initiatives, and the impressive feedback from parents and pupils about the experience of stepping away from social media. Relief and increased feelings of happiness and real social connection with their friends (meeting up and playing) were the primary benefits pupils reported. Parents really valued the communal support of other parents, alongside the school, which backed up their desire to regulate and manage their children’s access to social media.

In preparation for those talks, I have looked at the literature for children’s and teenagers’ experiences of social media, and the internet more broadly. One study, from last year, looked at the social media habits of 10 to 12-year-olds and concluded that less time on social media was linked to greater emotional well-being. Other studies of teenagers show that making more comparisons about their physical appearance on social media has been linked to poorer body image, more depressive symptoms, and less life satisfaction. A US survey of teenagers aged 13-17 found that about a third of them consider their social media use to be positive, but about a quarter consider it negative. One in four teenagers using social media find it a bad experience!

So Molly Russell may well have been negatively influenced by her use of social media. If so, she would be like one in every four teenagers. One in every four. If there was any other thing that made one in four teenagers feel bad, we’d be trying to do something about it. But we don’t seem to be making Facebook, Instagram, Twitter or Snapchat accountable for their role, despite the fact that most of us will have our justified concerns about any or all of these social networks.

We seem powerless, or helpless, to do anything. And I’m not just pointing the finger away from myself either – I include myself in the lack of action or outrage. Here I sit, someone with a lot of professional knowledge and understanding about the area and the impact it has on children and teenagers, but my own kids use social media, and I largely leave them to it.

Sure, I talk with them about stuff; I discuss suicide, anxiety, bullying and other aspects of mental health with them from time to time, and I hope that this is enough to protect them in their use of social media. But maybe it’s not. Maybe there is more that I need to do, or that you need to do?

That is what I loved about the schools that brought parents together to talk about – and do something about – social media. They enlisted the extra energy and vitality that a community can bring to an issue, where individual parents may feel they are a lone voice in the wilderness.

Perhaps now is the time for there to be a popular revolution against the insidious, and often hidden, infiltration of the social media giants into the lives of our children and teenagers. When I hear about how images, posts or information get put before kids, on the basis of “algorithms”, I can’t help but think about the book 1984, and Big Brother being out there watching our every move. I wonder if Instagram knows more about my kids interests than I do?