Health care has been a dominant issue on the campaign trail this fall, with voters particularly worried about continuing insurance protections for people with pre-existing medical conditions. But on Election Day, they will decide a number of other important health care questions for their states through ballot initiatives.

Among the most significant are referendums that would expand Medicaid in Idaho, Nebraska and Utah. If voters in all three states approve, an estimated 340,000 additional low-income adults would be eligible for free health coverage through the government program, as the health law allows, starting next year.

But the ballot questions also cover a wide range of other issues: whether to ease penalties for low-level drug offenders in Ohio; consider a ban on vaping in indoor work spaces in Florida; and whether to remove abortion protections from state constitutions in Alabama and West Virginia.

In addition to the ballot questions in Idaho, Nebraska and Utah, the outcome of tight governor’s races in seven states that have so far resisted expanding Medicaid could change the equation there.

In Maine, a win for the Democrat, Janet Mills, would most likely result in at least 70,000 low-income adults quickly becoming eligible for Medicaid. Voters in the state had approved an expansion of the program last year, but the outgoing governor, Paul LePage, a Republican, has blocked it.

Other states that could see Medicaid expand if Democrats win include Florida, Georgia, Kansas, Oklahoma, South Dakota and Wisconsin. In all, election results could extend Medicaid coverage to 2.7 million additional Americans, including more than a million in Florida alone.

On the other hand, a ballot question in Montana could abruptly end expanded Medicaid there. Voters will decide whether to continue providing it to low-income childless adults beyond this year by considering a measure that would double the cigarette tax to pay for the state’s share of the cost. The tobacco industry has poured more than $17 million into fighting the measure.

Depending on how many states join Virginia, where the legislature voted in May to expand Medicaid and an estimated 400,000 people will become eligible Jan. 1, the program could see its biggest enrollment growth since 2014, when the Affordable Care Act first allowed Medicaid expansion.

Two states, Alabama and West Virginia, will ask voters whether to amend their state constitutions to remove protections for the right to an abortion or require the funding of abortions. The questions come amid speculation that the newly reconfigured Supreme Court could overturn Roe v. Wade, allowing each state to decide whether to allow abortion.

In the more liberal state of Oregon, voters will decide whether to ban public spending on abortion except when medically necessary or required by federal law. If the initiative is approved, Medicaid would no longer cover abortions for low-income women; abortion might also no longer be a covered benefit for state employees.

In Oregon and Washington State, big beverage companies are pushing ballot initiatives that would prevent localities from imposing taxes on sugar-sweetened drinks as well as a wide range of groceries. Backed in large part by Coca-Cola and PepsiCo, the measures are a new front in the soda industry’s war on the taxes that health advocates see as an effective way to decrease the consumption of sugary beverages — products that have been linked to obesity and a range of diet-related illnesses.

Ohio, a state hard hit by overdose deaths, is asking voters whether drug possession cases should be prosecuted only as misdemeanors. The savings from a reduced inmate population would be used for drug rehabilitation and victims’ aid programs.

The Democratic candidate for governor, Richard Cordray, says the measure, which would amend the state’s constitution, is needed not least because the Legislature has failed to address the opioid crisis in a meaningful way. But opponents, among them the chief justice of the Ohio Supreme Court, some Democrats and the Republican candidate for governor, Mike DeWine, are concerned about unintended consequences, including the effects on the state’s drug courts, which lean heavily on the threat of incarceration to compel treatment and drug-free behavior. 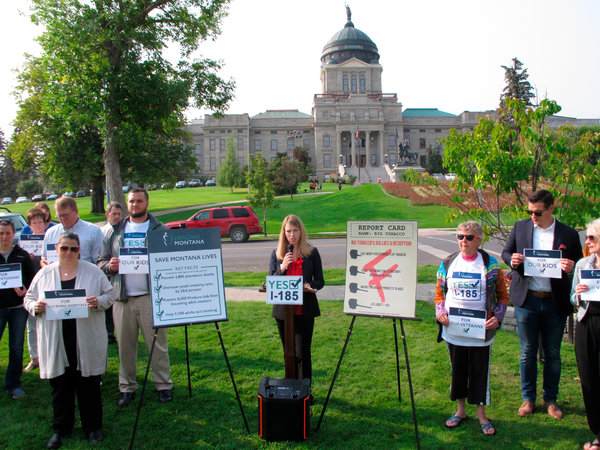 The initiative has received considerable out-of-state support, including $1 million each from foundations run by George Soros, the billionaire investor and Democratic donor, and Mark Zuckerberg, the founder of Facebook.

Tobacco companies and their products continue to be a target. South Dakota voters are being asked to approve substantial tax increases on cigarettes and wholesale tobacco goods, with a portion of the revenue to fund technical training schools for high school graduates. The state, which last raised cigarette taxes in 2006, has among the lowest such taxes in the country.

Florida voters will consider a bundled amendment that seems to be confounding many: Tucked into an initiative that would ban offshore drilling for oil and natural gas in state waters is a proposal that would extend a longstanding smoking ban in indoor work places to e-cigarettes and vapes.

Passage is uncertain, not only because many voters do not understand why both issues should be linked — proponents say they are both environmental topics — but because, pragmatically speaking, Amendment 9 is near the bottom of a long list of races and questions on the state ballot.

It may not be single payer, but it’s a step toward regulating health care prices. California voters will have the opportunity to weigh in on a proposition limiting how much dialysis companies can charge private insurers to treat patients with serious kidney disease.

State Democrats and labor unions, notably the Service Employees International Union-United Healthcare Workers West, are backing the proposition aimed at the two largest dialysis chains, DaVita and Fresenius. They claim the companies are overcharging for their care.

Both the California Medical Association and the California Hospital Association, as well as business groups and others, are opposed, and more than $100 million has been spent trying to defeat the measure. They say the proposition could hurt patients’ ability to get a lifesaving treatment.

Massachusetts voters will decide whether hospital nurses should be limited to a set number of patients they can care for at once. The number would range from one to six, depending on the type of medical unit or care needed.

Hospital groups have strenuously fought the proposal, saying that the cost of hiring enough nurses to meet the requirement would be close to $900 million, with the burden falling heavily on community hospitals. The Massachusetts Nurses Association, the union and professional group that drafted the question, argues that such limits protect patients and ultimately save money by reducing hospital stays.

The Utah question concentrates on the mechanics of prescribing and possession: If the referendum is approved, for example, then patients with medical cards would be allowed to grow up to six plants, by Jan. 1, 2021.

Other states are looking beyond medical use. Voters in Michigan and North Dakota face measures that would legalize recreational marijuana for adults 21 and older.

Nevada is poised to become the 10th state to provide sales tax exemptions specifically for feminine hygiene products, if voters approve a ballot initiative there. Opponents of eliminating the so-called pink tax say that it could cost the state from $72 million to $104 million annually.

The state’s voters are also being asked to approve sales tax exemptions for medical equipment like oxygen tanks and ventilators.