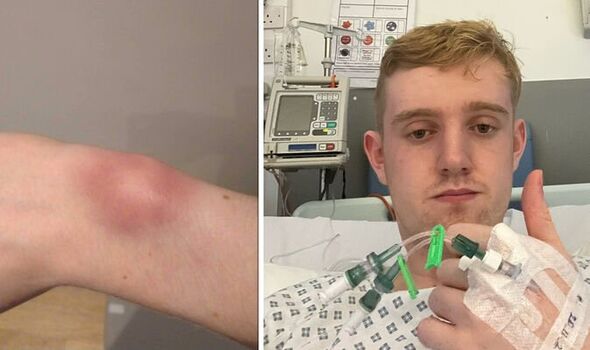 Speaking to Express.co.uk, Puttock explained that the pain was “instant” after injuring his wrist on a metal plate in 2019. With the false hope that the pain would subside he continued to try and carry on, but soon the pain from the “egg-sized lump” became “unlike anything he’d ever experienced”. In addition to unbearable pain, the young business undergraduate’s condition resulted in him suffering from weekly seizures as well as vomiting and fluctuations in weight loss. Now in desperation to try and rid himself of the condition, Puttock is fundraising £50,000 in order to get life-changing treatment in the US for the chronic condition. He hopes to get to the Spero Clinic in Fayetteville, Arkansas, where he will be treated using naturalistic methods.

When asked what his first experience of the condition was, Puttock said: “It was just the extremities of pain. It was just unusually out of proportion to be experiencing what I was experiencing.

“It’s hard to explain what it feels like to someone, the easiest way to describe it to someone who doesn’t understand is you’ve poured boiling water over yourself but it’s a burning sensation at that intensity.

“Most people say that it’s like being burned alive, which for many people it’s a hard comparison to understand. It’s horrible.

“It’s a pain that you can’t escape and who’s always there to ruin your plans or make you feel awful.”

Although seeking medical help immediately after sustaining his wrist injury, Puttock explained that medics were “confused” by his symptoms and couldn’t understand why he was in such extreme pain. Due to this it was around four to six months before he got an official diagnosis.

“Doctors would say ‘Oh get on with your life,’” Puttock continued. “I knew what CRPS pain feels like and I knew it was that but the doctors wouldn’t listen and brushed it off as IBS.

“It’s so frustrating not to feel listened to. I know my body better than anyone and I understand the difference in pain. It was a complete guessing game.”

Often referred to as suicide disease because many sufferers sadly take their own life due to the unbearable pain they are in on a daily basis, the McGill Pain Index, placed the condition at number 42 on the scale, ranking higher than both childbirth or the amputation of a finger or toe.

Although usually only affecting one limb, for Puttock the condition has spread to his fingertips and elbow, for which he needs daily medication in order to function properly. Then last year, the pain suddenly struck in his bowel, leaving him with not only extreme pain but sickness too.

Having first occurred when he was in the middle of taking his GCSE examinations, Puttock’s life was completely turned upside down. Remarkably he was still able to gain a place at Anglia Ruskin University where he studies International Business Management.

Even with achieving academically, Puttock stresses that everyday remains a struggle for him, with people only seeing him at his best. Explaining just how much life has changed for him he added: “They only see me when I’m absolutely pushing myself, but they don’t see me when I’m at my worst which is probably 70 percent of the time.

“I lived a normal teenage life; I enjoyed cycling and hanging out with friends, doing all the normal things. After the injury, everything stopped and my life changed. I can’t do sports anymore. I’m fatigued a lot of the time.

“My body’s always under strain, so it makes it really hard to do the things my friends are doing. It affects every aspect of your life, even down to the very small things. It has definitely led me down a different path.”

The NHS explains that the exact causes of CRPS remain unknown, but it is thought to be down to a combination of factors. One of the main theories is that CRPS is the result of a “widespread abnormal response to an injury” that causes several of the body’s systems to malfunction. These systems include:

These systems are responsible for many of the body’s functions including detecting pain, triggering swelling and controlling temperature and movement, which would explain some of the most common CRPS symptoms.

It has also been suggested that a person’s genes may play a part in them developing CRPS after an injury. However the precise role genes play in the development of CRPS is unclear and it remains very unlikely that other members of a family will be affected if you have CRPS.

Explaining more about the treatment he wishes to receive in America, Puttock said that his current treatment was disrupted by COVID-19, leaving him to try and manage the condition at home with the support of his family.

“The treatment in America is three-months long, but it is all natural and holistic,” he said. “There are no medications involved. No additional drugs or surgeries, it is just natural treatments which I found quite nice.”

Currently on the NHS, there are four main treatment types, which aim to manage but not cure symptoms. These include:

Remaining positive about adapting and overcoming his condition, Puttock went on to say that he has become quite recognisable around his home town and has been blown away by the generosity of individuals who have donated to his cause. This has meant he has raised over £7,000 so far.

He added: “It was quite weird because I had a few people stop me in the street. But I have had hundreds of messages. It has been crazy the reaction I have got. It has been so nice to see.”

You can support Jack and donate to his fundraising page here.