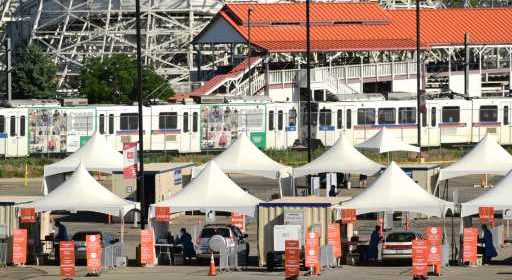 The team was getting hundreds, if not thousands, of these leads during the first month of the crisis. And they came from everywhere: People who knew people in China. Someone’s brother who has connections overseas.

Officials pulled the trigger and the masks were shipped to a warehouse in New Jersey. The company wanted Colorado to pay in advance, something state officials wouldn’t do. They had no idea what these masks really looked like or whether they even worked.

So Gov. Jared Polis rang a friend — a physician in New Jersey — to see if he could do some reconnaissance. The doctor got the specifications and ran them past people he knew in China. These aren’t masks you could use in a medical setting, he was told.

By the end of a long weekend going back and forth, Colorado officials told the company they wouldn’t pay for these masks.

As global supply chains froze in the early months of the coronavirus pandemic, inundated by demand that suppliers and manufacturers could never meet, Colorado was forced to rely on methods of procurement state officials never could have dreamed up.

The story of the New Jersey doctor is one of several situations state officials had to carefully negotiate as they forged through this chaotic new world of procurement, said Pat Meyers, Colorado’s constrained critical supply lead on the Innovation Response Team, who relayed the tale.

And as the state navigated the global supply chain and its myriad new actors — some with good intentions, others less so — it had to also figure out how to get supplies from the federal government. With the new coronavirus sending hundreds of people to the hospital every day, emergency management officials were desperately trying to acquire more ventilators needed for the sickest COVID-19 patients.

Internal emails obtained by The Denver Post show the state’s top emergency officials expressing exasperation at the lack of transparency from their federal partners, as they wondered why their orders kept getting canceled or ripped from their fingertips.

Meanwhile, some Colorado hospitals and nursing homes say they’re paying premiums of up to 1,500% for their needed supplies, with some orders backlogged until the fall.

In early April, Polis went on CNN and accused the Federal Emergency Management Agency of swooping in on an order for 500 ventilators, lamenting that it’s hard enough battling other states for resources, let alone the federal government. FEMA officials vehemently denied taking supplies earmarked for Colorado or any other states.

But emails between Colorado’s director of emergency management and FEMA’s regional leader — first obtained by government watchdog group Accountable.US, and independently obtained and reviewed by The Denver Post through the Colorado Open Records Act — show state leader’s frustrations with the government’s alleged intrusion on their orders.

“Lot of questions by our administration,” Kevin Klein, Colorado’s director for the Division of Homeland Security and Emergency Management, wrote in an April 6 email to Lee dePalo, FEMA’s regional head. “The governor got off the phone with the CEO of Zoll (a medical device company) who told him that FEMA preempted our purchase.”

Klein then referenced a New York Times story, which reported that FEMA was taking shipments and deciding where they should go on a county-by-county basis.

“No transparency,” Klein wrote. “No communication with the states. Kept us out there fighting for supplies. It may have been effective 6 weeks ago, but now? What is really going on?”

In a separate email, dePalo told Klein that Colorado’s orders were in the queue, but “the priority hasn’t gone beyond the most impacted areas right now.” He also relayed to Klein that FEMA Administrator Peter Gaynor told him that “we are not at a point where we can meet demand with vents” — ventilators — “still on the shelf.”

On April 8, Klein wrote to dePalo that “FEMA commandeered the shipments” for an order of 1 million N95 masks, in addition to the 200 ventilators.

“We were counting on those,” Klein wrote. “Those are the 3rd and 4th orders canceled. Can we get together and get clarity on how we are going to be supplied particularly with PPE?”

The Times reported that the Trump administration initially pushed for states to procure their own protective gear, but a new hybrid effort divided between the federal government, local officials and private health care companies was leading to confusion and allegations of confiscation — with Colorado serving as a prime example.

The desperation for ventilators in early April came as the state neared its peak hospitalization numbers, with some 200 people being admitted to the hospital each day. Despite modeling, no one really knew how many ventilators Colorado hospitals would need. Images from New York City, where hospitals were overrun by COVID-19 patients, startled public health officials and governors across the country.

On April 2, Polis sent a letter to Vice President Mike Pence, pleading with the Trump administration to send 10,000 ventilators.

But the state never did run out of ventilators, and the governor’s stay at home order and other social distancing efforts helped flatten the curve and prevented a shortage of ICU beds. As of Friday, with COVID-19 hospitalizations steadily falling, Colorado hospitals still had 790 of its 1,088 critical-use ventilators available.

FEMA has repeatedly denied seizing supplies from Colorado or other states, clarifying that federal government requirements are put ahead of other orders to assist areas most in need of supplies.

In a statement, dePalo said the effort to provide supplies during the pandemic “has been challenging, especially early on given limited supplies. At times, the supplies were acquired in a ‘just in time’ setting given the unprecedented situation.”

He added that his team was in constant contact with Colorado’s leadership, and that the state’s response to the virus has been “commendable and prevented medical facilities from being overwhelmed beyond capacity.”

Meanwhile, as state officials were trying to figure out where their ventilators had gone, the Innovation Response Team was sifting through leads on masks, gowns, gloves and other hospital supplies from this new network of vendors.

All of this was a novel concept for the state, which never before had bought these supplies in bulk. In normal times, hospitals and first responders purchase these items through their normal supply chains. The state wasn’t in the business of buying ventilators or personal protection equipment.

All of a sudden that changed.

And as global demanded skyrocketed, the state found that companies were using that to their advantage. Some suppliers, like the company Meyers described, wanted payment up front, before anything arrived.

That type of agreement — which the Polis administration says it stayed away from — caused some states to briefly lose tens of million of dollars when their products never showed up.

Take Blue Flame Medical, a company started during the epidemic by a pair of former Republican operatives. They said they could get the highly coveted N95 masks, and Colorado officials were interested. They negotiated for a week, but Blue Flame was asking for money up front and their prices were high, Meyers said.

Soon after, the Washington Post reported that the Department of Justice had launched an investigation into Blue Flame after multiple states said they paid the company for equipment they never received. California lost a $457 million deposit in one deal, though the state ultimately recouped the money.

Fraudulent practices and price gauging are rampant, the Polis administration, hospitals and nursing homes have found. Some companies charge up to $7 per N95 masks. They normally go for 80 cents.

The administration says it’s arrived at a stable place when it comes to reliable vendors, and that the supply chain is evening out — though it’s still not perfect.

As of last week, Colorado had spent $73.5 million on purchase orders for more than 23 million medical masks, face shields, gowns and gloves, as well as 750 ventilators, according to the governor’s office. These supplies are in addition to those provided to the state by FEMA or from the Strategic National Stockpile.

In a statement, Colorado’s Office of Emergency Management affirmed its strong relationship with FEMA, saying it had received 100 ventilators and millions of other pieces of personal protection equipment from the federal agency since the virus was confirmed the state in early March.

“FEMA continues to provide critical support to the state of Colorado by helping to secure resources for our COVID-19 response as well as technical assistance directly to the State Emergency Operations Center,” said Mike Willis, director of the Colorado Office of Emergency Management. “These partnerships were developed through planning efforts, exercises and response to past disasters.”

Hospitals and nursing homes, however, still are fighting for the supplies they need.

Scott Bunker, supply chain director at Gunnison Valley Hospital, said in order to fill the gap between need and allocation quantities, all hospitals are paying a 700% to 1,500% markup for personal protective equipment through third-party vendors.

Aspen Valley Hospital is still waiting on orders it put in two months ago, hospital spokeswoman Jennifer Slaughter said in an email. At the same time, some of their suppliers have changed production or temporarily closed, she said, leading to back orders that could reach all the way to November.

The end results of this widespread supply chain uncertainty were underscored in the recent experience of the Eben Ezer Lutheran Care Center outside Fort Morgan. The nursing home, which has seen some of the most devastating effects of the COVID-19 pandemic, tried to order gowns, masks and sanitizing wipes through a Connecticut company that previously specialized in graphic design.

But the order for desperately needed supplies instead blew up into a national blame-game, with the CEO of the nursing home accusing the Connecticut company of deception, the company blaming FEMA, and the federal agency saying Chinese companies were using it as a scapegoat for their inability to fill orders.

Ultimately, the nursing home never got its supplies.