Over the past year, as the health authorities have tried to curb the Covid-19 pandemic, researchers have trained their scientific attention on a variety of potentially risky environments: places where large groups of people gather and the novel coronavirus has ample opportunity to spread. They have swabbed surfaces on cruise ships, tracked case numbers in gyms, sampled ventilation units in hospitals, mapped seating arrangements in restaurants and modeled boarding procedures in airplanes.

They have paid less attention to another everyday environment: the car. A typical car, of course, does not carry nearly enough people to host a traditional super-spreader event. But cars come with risks of their own; they are small, tightly sealed spaces that make social distancing impossible and trap the tiny, airborne particles, or aerosols, that can transmit the coronavirus.

“Even if you’re wearing a face covering, you still get tiny aerosols that are released every time you breathe,” said Varghese Mathai, a physicist at the University of Massachusetts, Amherst. “And if it’s a confined cabin, then you keep releasing these tiny particles, and they naturally would build up over time.”

In a new study, Dr. Mathai and three colleagues at Brown University — Asimanshu Das, Jeffrey Bailey and Kenneth Breuer — used computer simulations to map how virus-laden airborne particles might flow through the inside of a car. Their results, published in early January in Science Advances, suggest that opening certain windows can create air currents that could help keep both riders and drivers safe from infectious diseases like Covid-19.

To conduct the study, the research team employed what are known as computational fluid dynamic simulations. Engineers commonly use these kinds of computer simulations, which model how gases or liquids move, to create racecars with lower drag, for instance, or airplanes with better lift.

The team simulated a car loosely based on a Toyota Prius driving at 50 miles per hour, with two occupants: a driver in the front left seat and a single passenger in the back right, a seating arrangement that is common in taxis and ride shares and that maximizes social distancing. In their initial analysis, the researchers found that the way the air flows around the outside of the moving car creates a pressure gradient inside the car, with the air pressure in the front slightly lower than the air pressure in the back. As a result, air circulating inside the cabin tends to flow from the back of the car to the front. 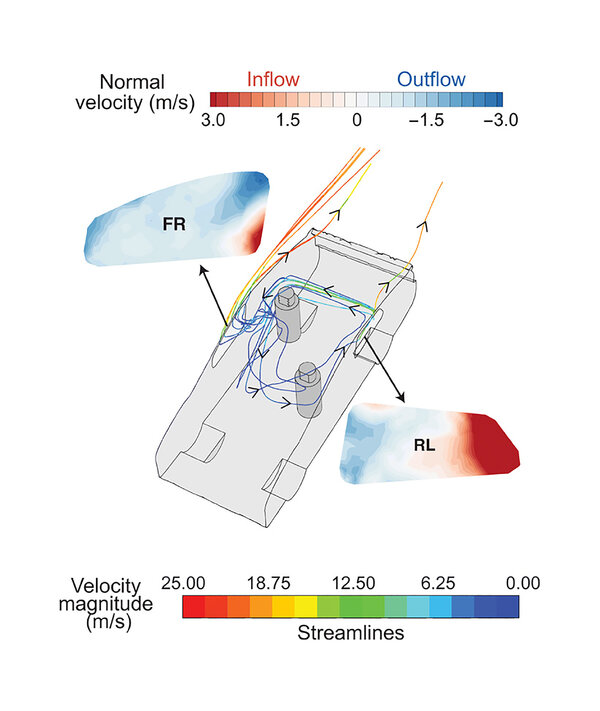 Next, they modeled the interior air flow — and the movement of simulated aerosols — when different combinations of windows were open or closed. (The air-conditioning was on in all scenarios.) Unsurprisingly, they found that the ventilation rate was lowest when all four windows were closed. In this scenario, roughly 8 to 10 percent of aerosols exhaled by one of the car’s occupants could reach the other person, the simulation suggested. When all the windows were completely open, on the other hand, ventilation rates soared, and the influx of fresh air flushed many of the airborne particles out of the car; just 0.2 to 2 percent of the simulated aerosols traveled between driver and passenger.

The results jibe with public health guidelines that recommend opening windows to reduce the spread of the novel coronavirus in enclosed spaces. “It’s essentially bringing the outdoors inside, and we know that the risk outdoors is very low,” said Joseph Allen, a ventilation expert at the Harvard T.H. Chan School of Public Health. In an op-ed last year, he highlighted the danger that cars could pose for coronavirus transmission, and the potential benefits of opening the windows. “When you have that much turnover of air, the residence time, or how much time the aerosols stay inside the cabin, is very short,” Dr. Allen said

Because it’s not always practical to have all the windows wide open, especially in the depths of winter, Dr. Mathai and his colleagues also modeled several other options. They found that while the most intuitive-seeming solution — having the driver and the passenger each roll down their own windows — was better than keeping all the windows closed, an even better strategy was to open the windows that are opposite each occupant. That configuration allows fresh air to flow in through the back left window and out through the front right window and helps create a barrier between the driver and the passenger.

“It’s like an air curtain,” Dr. Mathai said. “It flushes out all the air that’s released by the passenger, and it also creates a strong wind region in between the driver and the passenger.”

Richard Corsi, an air quality expert at Portland State University, praised the new study. “It’s pretty sophisticated, what they did,” he said, although he cautioned that changing the number of passengers in the car or the driving speed could affect the results.

Dr. Corsi, a co-author of the op-ed with Dr. Allen last year, has since developed his own model of the inhalation of coronavirus aerosols in various situations. His results, which have not yet been published, suggest that a 20-minute car ride with someone who is emitting infectious coronavirus particles can be much riskier than sharing a classroom or a restaurant with that person for more than an hour.

“The focus has been on superspreader events” because they involve a lot of people, he said. “But I think what sometimes people miss is that superspreader events are started by somebody who’s infected who comes to that event, and we don’t speak often enough about where that person got infected.”

In a follow-up study, which has not yet been published, Dr. Mathai found that opening the windows halfway seemed to provide about the same benefit as opening them fully, while cracking them just one-quarter of the way open was less effective.

Dr. Mathai said that the general findings would most likely hold for many four-door, five-seat cars, not just the Prius. “For minivans and pickups, I would still say that opening all windows or opening at least two windows can be beneficial,” he said. “Beyond that, I would be extrapolating too much.”

Ride-sharing companies should be encouraging this research, Dr. Mathai said. He sent a copy of his study to Uber and Lyft, he said, but has not received a response.