How to cope with loss: Experts' advice to help navigate bereavement 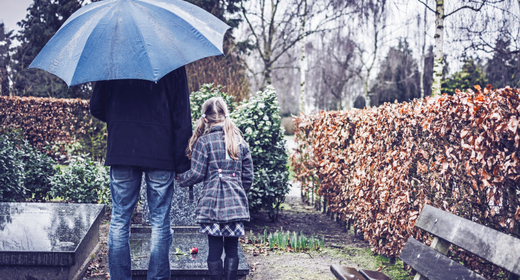 In his 1961 collection, A Grief Observed, the famed poet and author CS Lewis says that, “bereavement is a universal part of the experience of love… it is not the interruption of the dance, but the next figure of the dance”. Unfortunately, when it comes to loss, very few of us have an inbuilt rhythm to guide us around that particular dance floor. Caomhan Keane speaks to people whose personal or professional lives have been shaped by death for advice on how to get through the most difficult days of our lives.

GRIEF CAN BE COMPLICATED…

“A lot of the work we do talks about grief as a normal process,” says Orla Keegan, Head of Education and Bereavement at the Irish Hospice Foundation. “It’s hard, it’s difficult but it’s not a counselling issue. Normally, neighbours, family and friends are as much as most people need.”

However, 10pc of bereaved people will develop prolonged grief disorder, a chronic, heightened grieving process that may require counselling or medication.

While everyone’s grief is individual, if, after 12 months, a person is still detached, bitter or preoccupied with their sorrow and/or unable to go about normal routines due to their extreme focus on their loved one, they should visit their GP.

GRIEF CANNOT SIMPLY BE ‘GOTTEN OVER’…

In her TedTalk, Dr Susan Delaney, a clinical psychologist and Bereavement Services Manager at the Irish Hospice Foundation said: “There are no ‘five stages’ of grief. There never was. Death ends a life, not a relationship. If someone mattered to you in life, they continue to matter to you after they die. We just have to find a different way to relate to them. For most people I speak to, it would be their worst nightmare that they would ‘get over’ the person they’ve lost.”

Marie Cregan is one of the founding members of Féileacáin, the stillbirth and neonatal death association of Ireland. “Very few parents, despite the pain and suffering they have gone through, would be without the memory of their child, the lessons they thought us,” she says. “You’re never the same. But they are a part of you that you couldn’t live without.”

“The death of a child is probably the worst loss anyone can go through,” says Sharon Vard of Anam Cara, the parental and sibling support group. “It’s the loss of the future and its milestones – communions, confirmations, graduations, marriages, grandchildren.

“The first few years are very, very difficult. But then we learn how to cope. But there are always sideswipes; old songs on the radio, a movie coming up, that can bring you back. It’s perfectly OK to have a cry, feel sad. It’s your connection to them. They will always be part of your lives.”

“One of the hardest things for anybody to do is to try and respect how another person is grieving,” says Vard. “My husband didn’t want to go to our daughter’s grave. Fourteen years on, I accept that. Going to the grave worked for me, but not for him. But it can cause a disconnect. Once it’s not causing harm, try and give people the space to grieve in their own way.”

People will avoid grief. They throw themselves into work, fundraise or raise awareness. “Then three years pass,” says Vard, “and they’ve achieved whatever it is they had set their mind on and they are finally ready to grieve. But their support network may have moved on. And they find themselves alone when they need people most. We suggest that from the start you sit down with your grief for 20 minutes every day. Don’t put it on hold.”

GRIEF CAN BE CONTENTIOUS…

“Friends become strangers and strangers can become friends,” says Vard. “People don’t know how to be around you, so sometimes they just aren’t.”

Then there are the well-meaning friends who become the victims of your sadness. “Sometimes people blow up as it’s the straw that broke the camel’s back,” says Cregan about volcanic reactions to what might have seemed like an innocuous comment. “But comments like ‘they’re in a better place,’ or ‘you can have another baby,’ are just not helpful.”

“It is important that when we realise we have been unreasonable, we apologise” adds Vard. “And if we feel justified in our actions, we can say, ‘look, I am really sorry, this is how I feel. I didn’t find that remark helpful.'”

GRIEF CAN BE PHYSICAL…

CS Lewis is quoted as having said that he never realised that grief felt so much like fear, that gnawing at the stomach which makes your heart beat faster, which in turn tires you out.

“People usually associate grief with sadness and emotions; that’s the stereotype,” says Keegan. “In reality, grief affects every single part of our life, and that can be disturbing and surprising for people. You physically feel grief. Bereaved people might find themselves exhausted, like physically tired. Doing even simple things are more of an effort.”

Grieving people can also be immunocompromised, picking up colds more readily than usual. And it can affect your digestion.

GRIEF SHOULD BE ACKNOWLEDGED…

“The victim wants to talk about their loved one,” says Margaret Quigley of Support After Homicide, “they want to say his or her name. Talking about them helps to keep that person alive for them, allow them to be what way they were.

“But people don’t know what to say. So they avoid them in the street. So those left behind often isolate themselves or feel stigmatised.”

“Acknowledgement of the baby is paramount,” adds Cregan. “There’s a fear of talking about it. But parents are upset already. Give them a chance to cry. My baby’s name might bring tears to my eyes, but it’s also music to my heart.”

GRIEF CAN BE TALKED THROUGH…

“People think you should be better than perhaps you are, a year down the road,” says Teresa Bell, Samaritans Deputy Regional Director. “They don’t mention the loved one as often for fear of upsetting the person who is bereaved, who is then less inclined to say how they are feeling. It’s like they are being pushed out of the conversation. A volunteer can give time to that person, ask them what their partner was like, what things they enjoyed to do. This allows them to tell the story of the person they have lost, and relive some of those memories with a neutral person.

“It can be very good for them. Sometimes all they need to do is talk. Other times it’s the start of a journey, where they decide they need to see a bereavement counsellor.”

GRIEF SHOULD NOT BE GENDERED…

“What’s really sad for dads is that there is an expectation that you need to get on with it and take charge,” says Vard. “And they are heartbroken. Yet society expects them to continue on.”

GRIEF CAN BE DISENFRANCHISED…

Some types of loss are judged, erroneously, of not being worthy of support.

“With the loss of an ex-partner, people often think ‘well, you divorced them; this isn’t your loss to grieve’,” says a spokesperson for Beginning Experience, a peer support group for those who have suffered the loss of a partner through bereavement, divorce or separation.

“But marriage is such a strong, strong thing, there is always some connection, even though it ended for whatever reason.

“And when you have children together, you are always going to be tied together in some way. So when that person dies, the sadness, guilt and anger of the separation is relieved all over again.”

It’s impossible to be able to plan with any certainty how a child will react when it comes to informing them about an upcoming death or, post-mortem, whether they should see a body or not.

For Colman Noctor, a child and adolescent psychotherapist with St Patrick’s Mental Health Services, it’s important not to force a ‘grief agenda’.

“Some children will be more able for detail than others. A child who feels they weren’t informed enough to say goodbye, or feels the seriousness was kept from them, can feel really aggrieved.

“On the flip side is that a child can become overburdened, where they feel beyond what their developmental age can accommodate. You need to get that dial in the middle, informed but not overwhelmed.”

GRIEF IS NOT TIME SPECIFIC…

A younger child may lose a very close relative and not seem to grieve. There may not even be a noticeable reaction at ceremonial events like the wake or the funeral.

But grief can be maturational.

“A young girl loses her mother at four years of age and she may not have an understanding of the permanency of death,” says Noctor.

“But when puberty hits, she’s 13 and she starts her menstrual cycles, and she really needs a mom, that’s when she might start to grieve for a loss she has only just noticed.”

GRIEF CAN BE SPIRITUAL…

“I’ve seen people who would have called themselves good Catholics who, in the face of loss, will question how a good God can do this to them,” says Keegan. “While we have also seen people who have no God forced to really think about life and living. If their loved one is gone and the pain is all that’s left, they need to go on a secular, spiritual search – what was good about the relationship and what it means to you now.”

Another area where people’s feelings may be neglected is after the death of a beloved pet. “People need reassurance that it is valid to grieve the loss of an animal and are sometimes embarrassed by how intense their feelings are when a pet dies,” says Annie Kilmartin, of Solace Pet Loss Ireland.

“People need to be empathised with and comforted, as there can be a lot of guilt. Did they time the decision to euthanise their pet right – too soon or too late?

“They may have witnessed a pet die suddenly and are in a state of shock and grief at never having had an opportunity to say goodbye.

“Meanwhile for some people who are living alone, an animal can be their constant companion and a reason for getting out every day. This pet might also be the last connection to a partner who has passed on.

“Grief is grief, and love knows no species boundaries.”

GRIEF CAN BE POSITIVE…

“People think of grief as just a negative experience but people do change and change positively and grow a little after it. It’s very hard for them to see at the time, but it can be you taking on new responsibilities, or a new way of looking at the world,” says Keegan.

* anamcara.ie – for bereaved parents and siblings

* beginningexperience.ie – loss of a partner through death, separation or divorce