A heart-melting video shows the moment a girl born without eyes sings during a brain scan to keep herself calm.

Evie Hurst was adopted from China when she was four years old. She was severely malnourished and had no medical history.

According to a GoFundMe page set up by her foster mother, Evie is going through genetic testing to piece together her health.

But Evie, who is terrified of hospitals, needs music therapy for her ongoing visits. She is thought to live in Michigan.

During a recent scan, Evie can be seen singing Alessia Cara’s ‘Scars to Your Beautiful’ with her therapist playing the guitar alongside her. 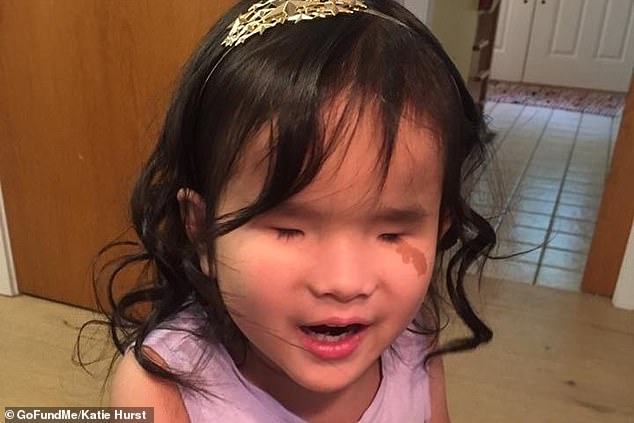 Evie, who is blind due to a condition called anophthalmia, is terrified of the hospital but needs a lot of testing done to piece together her health 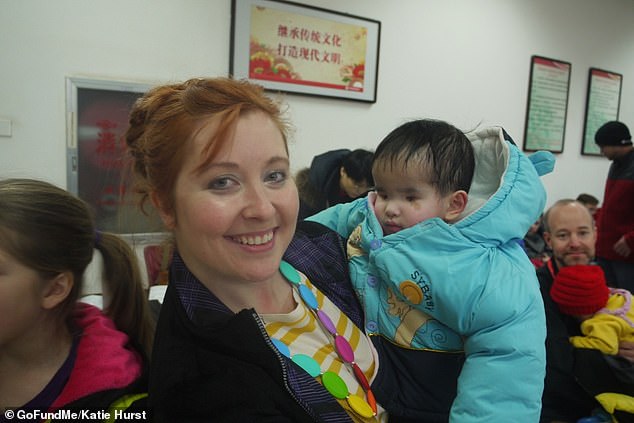 Evie was adopted by Katie Hurst from China when she was four years old, severely malnourished and with no medical history

Katie Hurst is trying to fundraise $10,000 for her adopted child’s health.

She wrote on a fundraising page: ‘Music therapy is not covered by insurance at this time, and as you can see in her video, music is medicine to Evie.  

‘We have no idea what Evie’s life holds for her future. She has no medical history from before we adopted her.

‘Right now, we are simply trying to piece together the puzzle of her health. Evie is undergoing genetic testing at this time.’

When Ms Hurst adopted Evie, who has no eyes because of a condition called anophthalmia, she was in desperate need of help.

Ms Hurst said: ‘At that time she was failing to thrive for unknown reasons. She was more malnourished then I am comfortable sharing with the public.

‘At that point in time Evie could not eat or drink without assistance.’

One day Evie sang to Ms Hurst and her other daughter, who were shocked to discover her beautiful talent. 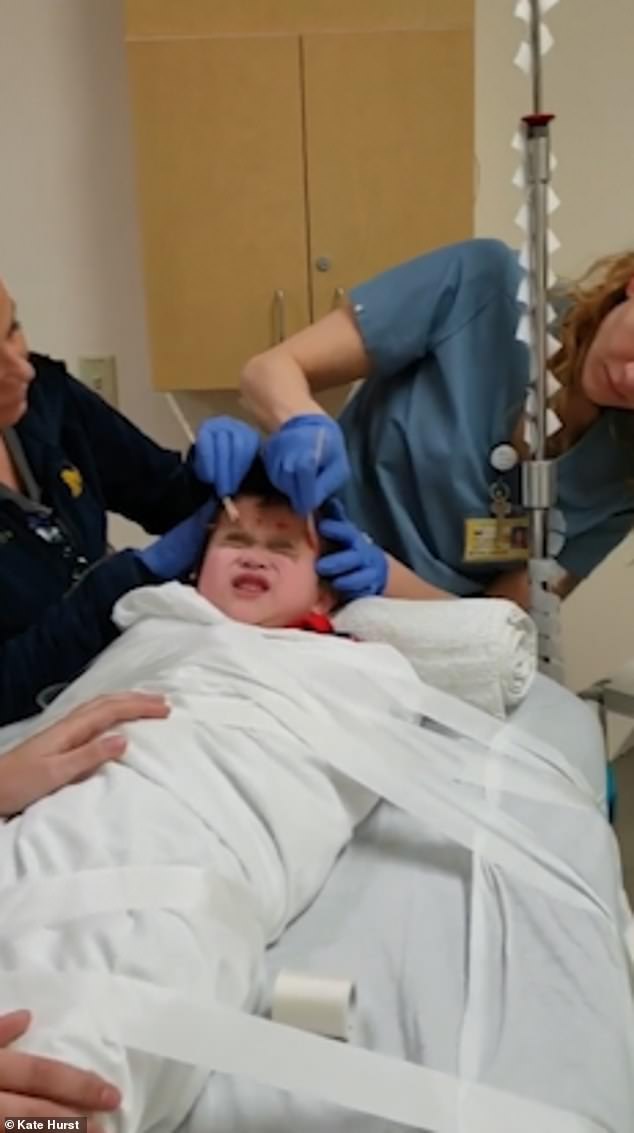 During a recent EEG scan procedure, Evie can be seen singing Allesia Cara’s ‘Scars to Your Beautiful’ with her therapist playing the guitar alongside her 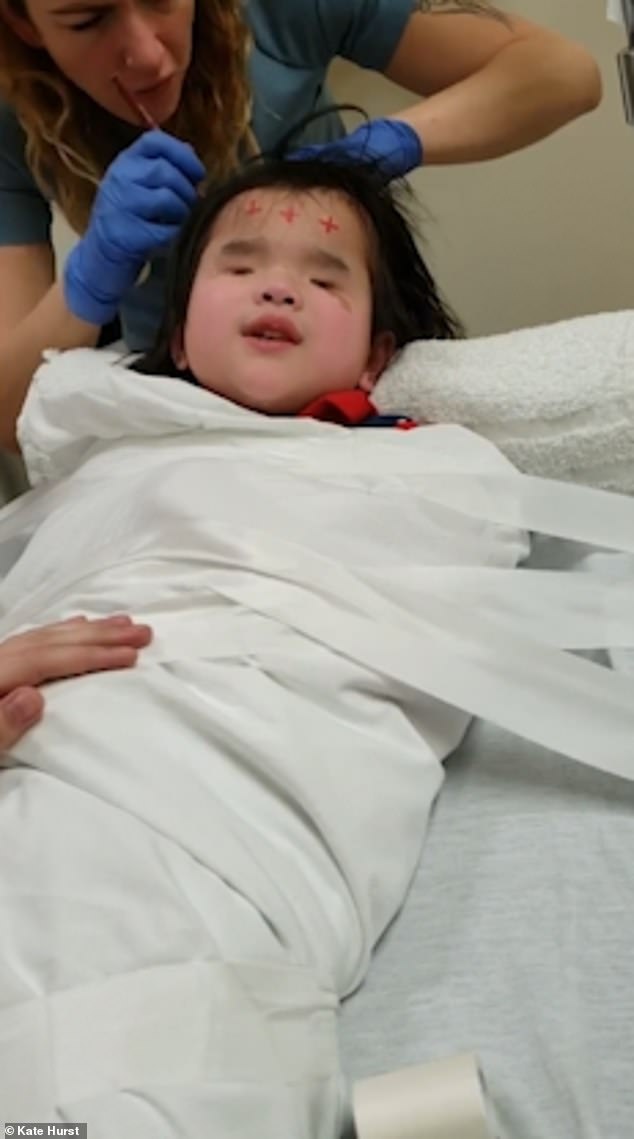 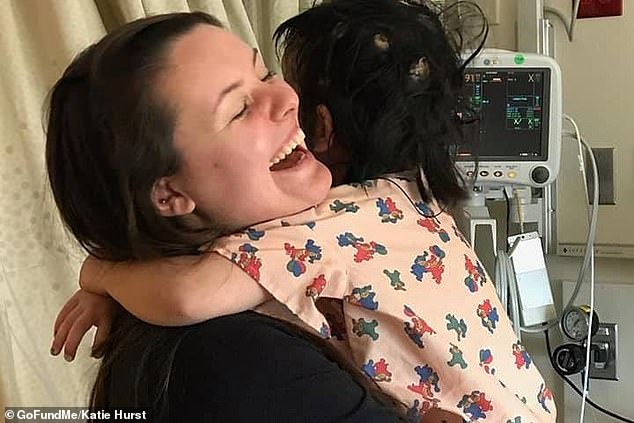 ‘It was then that we knew she had the fight in her to make it out of this,’ Ms Hurst said.

The family are fundraising to help towards music therapy lessons and any medical bills in her future.

Ms Hurst said: ‘Feeling a tad silly, yet hopeful that this helps Evie get all the future treatment and therapy she needs.

‘We believe she is beautiful just the way she is and that God designed her perfectly. As she says every morning before school, “I am blind. I am smart! I am beautiful!”‘

These rare disorders develop during pregnancy and can be associated with other birth defects.

Causes of these conditions may include genetic mutations and abnormal chromosomes.

Researchers also believe that environmental factors, such as exposure to X-rays, chemicals, drugs, pesticides, toxins, radiation, or viruses, increase the risk of anophthalmia and microphthalmia, but research is not conclusive. Sometimes the cause in an individual patient cannot be determined.

There is no treatment for severe anophthalmia or microphthalmia that will create a new eye or restore vision. However, some less severe forms of microphthalmia may benefit from medical or surgical treatments.

In almost all cases improvements to a child’s appearance are possible. Children can be fitted for a prosthetic artificial eye for cosmetic purposes and to promote socket growth.

According to CDC, researchers estimate that about one in every 5,300 babies born in the US will have anophthalmia or microphthalmia. This means about 780 babies are born with these conditions each year.

One study estimated the prevalence of anophthalmia and microphthalmia in the UK as one per 10,000 births.