Frequent drinking is 'a bigger risk to health than binge drinking'

Drop that evening glass of wine: Frequent drinking is ‘a bigger risk to health than binge drinking’, study claims

Frequent drinking over the week is a bigger risk to health than binge drinking, a study has found.

Health officials have long advised spreading units out over a number of days, instead of saving them for a big session at the weekend.

But now, scientists in South Korea warn this could be ‘dangerous’ after studying  the drinking habits of almost 10million people.

Researchers found the number of times a person drank over the week raised the odds of atrial fibrillation (AF), but the amount consumed in each session had no effect.

Those who had drank every day had a 40 per cent higher risk than those who drank twice a week.

The total number of beverages in a week still raised the risk of AF, as alcohol is well known to trigger the condition.

AF is an abnormal heart rhythm which increases stroke risk by around four to five times. 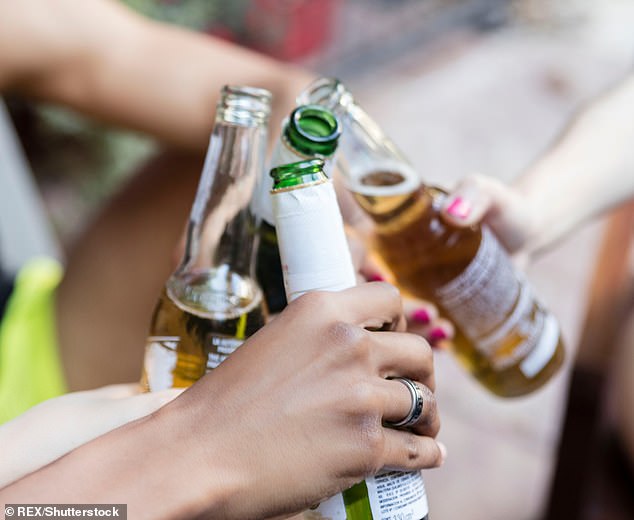 Frequent drinking over the week is a bigger risk to health than binge drinking, study warns

‘Recommendations about alcohol consumption have focused on reducing the absolute amount rather than the frequency,’ said study author Dr Jong-Il Choi, of Korea University College of Medicine and Korea University Anam Hospital, Seoul.

‘Our study suggests that drinking less often may also be important to protect against atrial fibrillation.’

The previous Chief Medical Officer Dame Sally Homes recommended men and women drink no more than 14 units a week on a regular basis, the equivalent of around six pints of beer and six glasses of wine.

She said it was safest to spread units out over three or more days.

Excessive alcohol is a cause of AF, but it is not clear what patterns of drinking are the most dangerous.

But the NHS state ‘particularly binge drinking’ can trigger an episode of AF – sometimes it’s not always present.

WHAT ARE THE UK GUIDELINES FOR ALCOHOL?

Men and women are advised not to drink more than 14 units a week on a regular basis.

One unit equals 10ml or 8g of pure alcohol, which is around the amount of alcohol the average adult can process in an hour.

A pint of strong lager contains 3 units of alcohol, whereas the same volume of low-strength lager has just over 2 units.

The study examined 9,776,956 individuals without AF who underwent a national health check-up in 2009.

They were asked how many times they indulged per week, the amount of alcohol in each session, and the amount overall.

The participants were followed up until 2017 to see if they had a diagnosis of AF.

The number of drinking sessions per week was the strongest risk factor for AF, the findings show.

Consuming large amounts per session, which is ‘binge drinking’, did not show any links to AF.

Those who drank twice a week had the lowest risk for AF. Therefore, they were set as a reference point.

Participants who drank once a week had a nine per cent higher chance of AF in comparison.

Those who never drank had a slightly higher likelihood of AF than those who drank twice a week. The researchers did not explain why this might be, however, moderate alcohol is considered to have some health benefits.

Dr Choi said: ‘Our study suggests that frequent drinking is more dangerous than infrequent binge drinking with regard to AF.

‘The number of drinking sessions was related to atrial fibrillation onset regardless of age and sex.

‘Repeated episodes of atrial fibrillation triggered by alcohol may lead to overt disease.

‘In addition, drinking can provoke sleep disturbance which is a known risk factor for atrial fibrillation.’

In keeping with previous studies, the total amount of alcohol consumed over a week was related to AF.

There was a two per cent increase in the risk of new-onset AF for each gram of alcohol consumed per week.

There are eight grams of alcohol in one unit. A spirit shot is one unit, a pint of higher-strength beer or large glass of wine is three units.

Dr Choi recommended considering both how much and how often you are drinking if you are concerned about heart rhythm disorders.

‘Atrial fibrillation is a disease with multiple dreadful complications and significantly impaired quality of life.’

AF is the most common heart rhythm disturbance, affecting around one million people in the UK, and 2.7million in the US.

Around seven in 100 people aged over 65 are diagnosed.

Sufferers can have an irregular pulse, shortness of breath, chest pain and tiredness.

The study was published in EP Europace, a journal of the European Society of Cardiology (ESC).

WHAT IS ATRIAL FIBRILLATION?

Atrial fibrillation is a heart condition that causes an irregular and often abnormally fast heart rate.

A normal heart rate should be regular and between 60 and 100 beats a minute when you’re resting.

You can measure your heart rate by feeling the pulse in your neck or wrist.

In atrial fibrillation, the heart rate is irregular and can sometimes be very fast. In some cases, it can be considerably higher than 100 beats a minute.

This can cause problems including dizziness, shortness of breath and tiredness.

Atrial fibrillation is the most common heart rhythm disturbance, affecting around 1 million people in the UK.

It can affect adults of any age, but it’s more common in older people. It affects about 7 in 100 people aged over 65.

You may be aware of noticeable heart palpitations, where your heart feels like it’s pounding, fluttering or beating irregularly, often for a few seconds or, in some cases, a few minutes.

You should make an appointment to see your GP if: