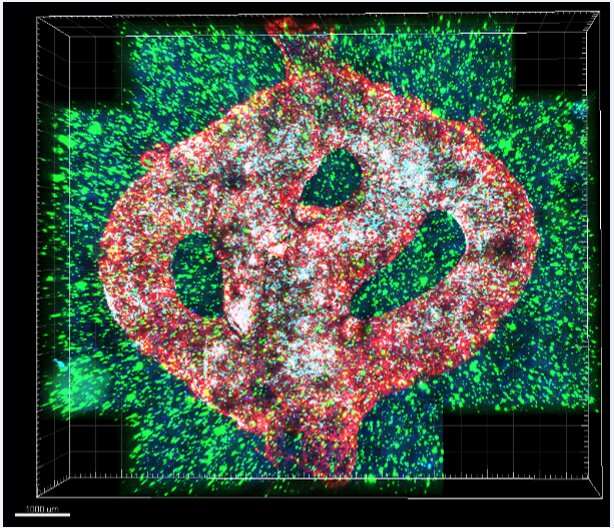 Researchers at Tel Aviv University have printed an entire active and viable glioblastoma tumor using a 3D printer. The 3D-bioprinted tumor includes a complex system of blood vessel-like tubes through which blood cells and drugs can flow, simulating a real tumor.

The study was led by Prof. Ronit Satchi-Fainaro. The new technology was developed by Ph.D. student Lena Neufeld, together with other researchers at Prof. Satchi-Fainaro’s laboratory.

The 3D-bioprinted models are based on samples from patients, taken directly from operating rooms at the Tel Aviv Sourasky Medical Center. The new study’s results were published today in the journal Science Advances.

“Glioblastoma is the most lethal cancer of the central nervous system, accounting for most brain malignancies,” says Prof. Satchi-Fainaro. “In a previous study, we identified a protein called P-Selectin, produced when glioblastoma cancer cells encounter microglia—cells of the brain’s immune system. We found that this protein is responsible for a failure in the microglia, causing them to support rather than attack the deadly cancer cells, helping the cancer spread. However, we identified the protein in tumors removed during surgery, but not in glioblastoma cells grown on 2D plastic petri dishes in our lab. The reason is that cancer, like all tissues, behaves very differently on a plastic surface than it does in the human body. Approximately 90% of all experimental drugs fail at the clinical stage because the success achieved in the lab is not reproduced in patients.”

To address this problem, the research team led by Prof. Satchi-Fainaro and Ph.D. student Lena Neufeld, recipient of the prestigious Dan David Fellowship, created the first 3D-bioprinted model of a glioblastoma tumor, which includes 3D cancer tissue surrounded by extracellular matrix, which communicates with its microenvironment via functional blood vessels.

“It’s not only the cancer cells,” explains Prof. Satchi-Fainaro. “It’s also the cells of the microenvironment in the brain; the astrocytes, microglia and blood vessels connected to a microfluidic system—namely a system enabling us to deliver substances like blood cells and drugs to the tumor replica. Each model is printed in a bioreactor we have designed in the lab, using a hydrogel sampled and reproduced from the extracellular matrix taken from the patient, thereby simulating the tissue itself. The physical and mechanical properties of the brain are different from those of other organs, like the skin, breast, or bone. Breast tissue consists mostly of fat, bone tissue is mostly calcium; each tissue has its own properties, which affect the behavior of cancer cells and how they respond to medications. Growing all types of cancer on identical plastic surfaces is not an optimal simulation of the clinical setting.” 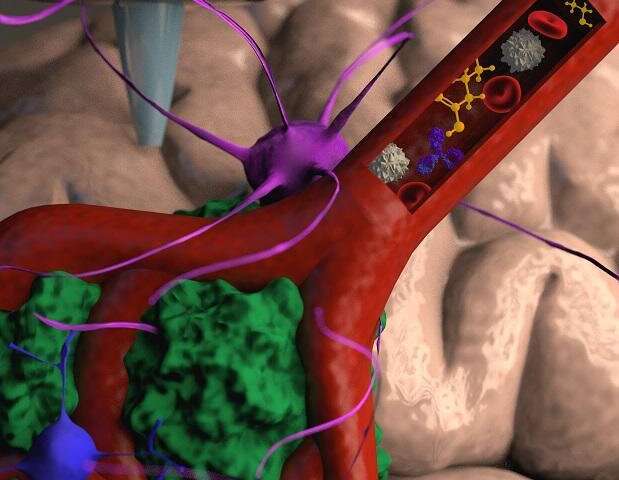 After successfully printing the 3D tumor, Prof. Satchi-Fainaro and her colleagues demonstrated that unlike cancer cells growing on petri dishes, the 3D-bioprinted model has the potential to be effective for rapid, robust, and reproducible prediction of the most suitable treatment for a specific patient.

“We proved that our 3D model is better suited for prediction of treatment efficacy, target discovery and drug development in three different ways. First, we tested a substance that inhibited the protein we had recently discovered, P-Selectin, in glioblastoma cell cultures grown on 2D petri dishes, and found no difference in cell division and migration between the treated cells and the control cells which received no treatment. In contrast, in both animal models and in the 3D-bioprinted models, we were able to delay the growth and invasion of glioblastoma by blocking the P-Selectin protein. This experiment showed us why potentially effective drugs rarely reach the clinic simply because they fail tests in 2D models, and vice versa: why drugs considered a phenomenal success in the lab, ultimately fail in clinical trials. In addition, collaborating with the lab of Dr. Asaf Madi of the Department of Pathology at TAU’s Faculty of Medicine, we conducted genetic sequencing of the cancer cells grown in the 3D-bioprinted model, and compared them to both cancer cells grown on 2D plastic and cancer cells taken from patients. Thus, we demonstrated a much greater resemblance between the 3D-bioprinted tumors and patient-derived glioblastoma cells grown together with brain stromal cells in their natural environment. Through time, the cancer cells grown on plastic changed considerably, finally losing any resemblance to the cancer cells in the patient’s brain tumor sample. The third proof was obtained by measuring the tumor growth rate. Glioblastoma is an aggressive disease partially because it is unpredictable: when the heterogeneous cancer cells are injected separately into model animals, the cancer will remain dormant in some, while in others, an active tumor will develop rapidly. This makes sense because we, as humans, can die peacefully of old age without ever knowing we have harbored such dormant tumors. On the dish in the lab, however, all tumors grow at the same rate and spread in the same rate. In our 3D-bioprinted tumor, the heterogeneity is maintained and development is similar to the broad spectrum that we see in patients or animal models.” 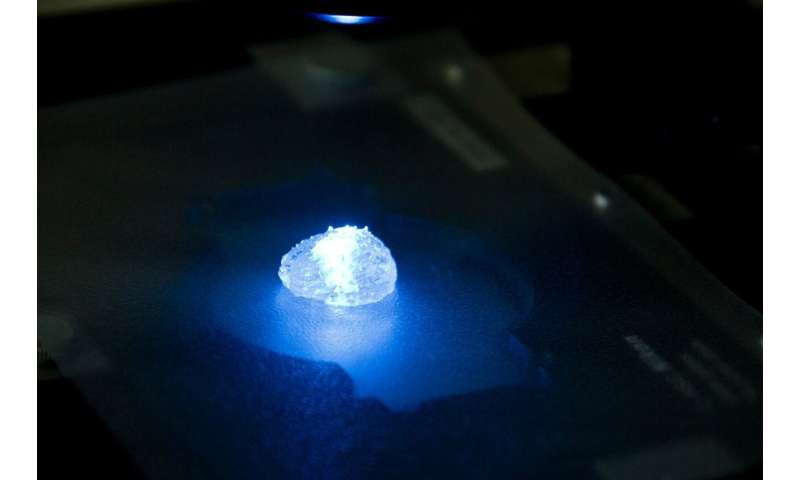 According to Prof. Satchi-Fainaro, this innovative approach will also enable the development of new drugs, as well as discovery of new drug targets—at a much faster rate than today. Hopefully, in the future, this technology will facilitate personalized medicine for patients.