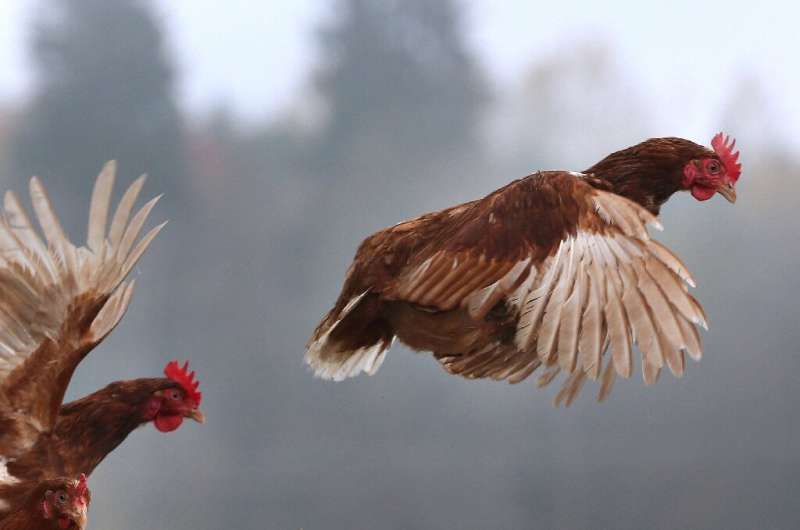 Russia said Saturday that its scientists had detected the world’s first case of transmission of the H5N8 strain of avian flu from birds to humans and had alerted the World Health Organization.

In televised remarks, the head of Russia’s health watchdog Rospotrebnadzor, Anna Popova, said scientists at the Vektor laboratory had isolated the strain’s genetic material from seven workers at a poultry farm in southern Russia, where an outbreak was recorded among the birds in December.

The workers did not suffer any serious health consequences, she added. They are believed to have caught the virus from poultry on the farm.

“Information about the world’s first case of transmission of the avian flu (H5N8) to humans has already been sent to the World Health Organization,” Popova said.

There are different subtypes of avian influenza viruses.

While the highly contagious strain H5N8 is lethal for birds, it had never before been reported to have spread to humans.

Popova praised “the important scientific discovery”, saying “time will tell” if the virus can further mutate.

“The discovery of these mutations when the virus has not still acquired an ability to transmit from human to human gives us all, the entire world, time to prepare for possible mutations and react in an adequate and timely fashion,” Popova said.

The WHO confirmed on Saturday that it had been notified by Russia about the development.

“We are in discussion with national authorities to gather more information and assess the public health impact of this event,” a spokesperson said.

“If confirmed, this would be the first time H5N8 infects people.”

WHO stressed that the Russian workers were “asymptomatic” and no onward human-to-human transmission had been reported.

People can get infected with avian and swine influenza viruses, such as bird flu subtypes A(H5N1) and A(H7N9) and swine flu subtypes such as A(H1N1).

According to the WHO, people usually get infected through direct contact with animals or contaminated environments, and there is no sustained transmission among humans.

H5N1 in people can cause severe illness and has a 60 percent mortality rate.

‘Tip of the iceberg’

Gwenael Vourc’h, head of research at France’s National Institute for Agriculture, Food, and Environment, said that influenza viruses are known to evolve “quite quickly” and that there might have been other cases besides those reported in Russia.

“This is probably the tip of the iceberg,” she told AFP.

Francois Renaud, a researcher at the French National Centre for Scientific Research (CNRS), said however that he was “not particularly worried” at this stage.

He added that the coronavirus pandemic had taught countries to react quickly to potential health threats. “Draconian measures will be taken to immediately stop the outbreak,” he said.

Avian flu has raged in several European countries including France, where hundreds of thousands of birds have been culled to stop the infection.

Russia’s Vektor State Virology and Biotechnology Center, which detected the transmission to the poultry farm workers, also developed one of the country’s several coronavirus vaccines.

In the Soviet era the lab, located in Koltsovo outside the Siberian city of Novosibirsk, conducted secret biological weapons research.

It still stockpiles viruses ranging from Ebola to smallpox.

In televised remarks, Vektor chief Rinat Maksyutov said the lab was ready to begin developing test kits that would help detect potential cases of H5N8 in humans and to begin work on a vaccine.

The Soviet Union was a scientific powerhouse and Russia has sought to reclaim a leadership role in vaccine research under President Vladimir Putin.