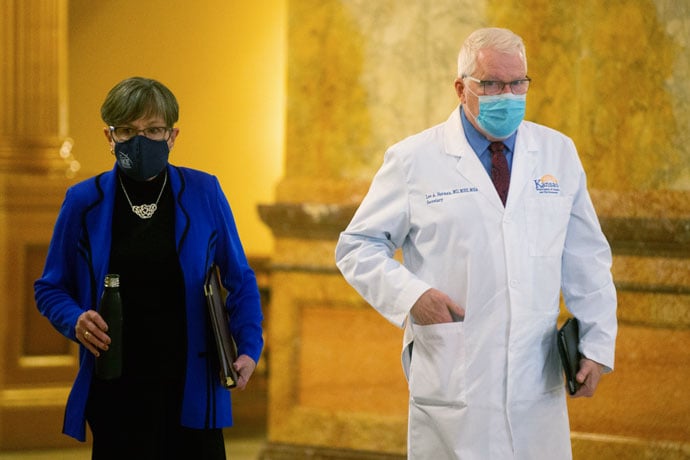 TOPEKA, Kan. (AP) — Dr. Lee Norman, who led Kansas through the coronavirus pandemic until his abrupt departure last month, has said in an interview that he was “Fauci’d” out by COVID-19 politics.

Democratic Gov. Laura Kelly announced on Nov. 19 that Norman had stepped down as both top administrator at the state Department of Health and Environment and state health officer. He had been the health department’s top administrator since Kelly took office in January 2019. He was replaced quickly by Janet Stanek, a longtime hospital administrator from Topeka.

But in an interview with Kansas News Service published Tuesday, Norman said he resigned because he was asked to. He cited constant friction between the governor and the Republican-led legislature.

“The shameful treatment in the Trump administration of public health leaders, I think, set the stage for having the same thing happen at the state level,” Norman said, citing frequent criticism from the right of Dr. Anthony Fauci, the government’s top infectious disease expert.

Referring to the constant criticism, Norman said, “To be honest with you, I think I was Fauci’d.”

Kelly, in announcing Norman’s departure, praised him as “the most consequential” leader in the department’s history. The departure came two weeks after Kelly expressed opposition publicly to vaccine mandates from Democratic President Joe Biden that affect more than 100 million workers.

Norman was perhaps the most visible Kelly adviser early in the coronavirus pandemic, often standing alongside her in a white lab coat. But he was less visible in recent months.

Conflicts with the public and elected leaders at the municipal and county level have resulted in the firings and resignations of many public health leaders across the U.S. Norman said 48 of Kansas’ 105 counties have lost their public health administrator or county health officer.

“The brain drain out of public health puts us in peril going forward,” he said.

Norman reiterated that COVID-19 vaccines are safe and offer the best defense against current and future variants of the virus.

“The longer we have non-immune individuals roaming the Earth, the more variants we are going to see emerge,” he said.