Despite the pandemic, internists have managed to gain some ground in the wealth department over the past year, a Medscape survey shows. 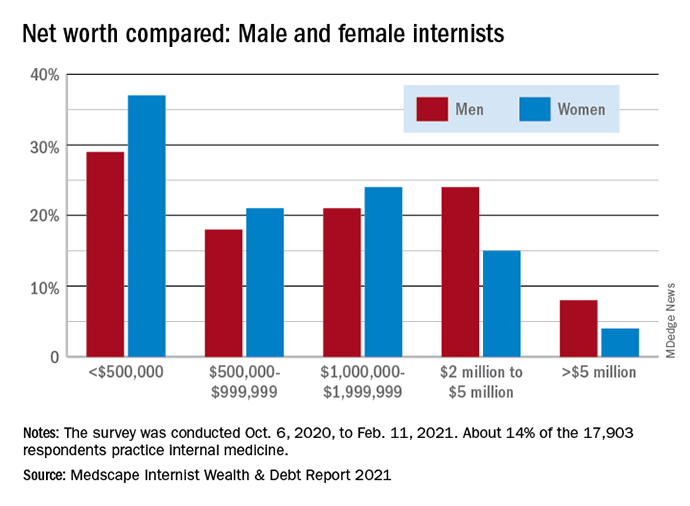 “The rise in home prices is certainly a factor,” Joel Greenwald, MD, CFP, a wealth management adviser for physicians, said in an interview.

“Definitely the rise in the stock market played a large role; the S&P 500 finished the year up over 18%. Finally, I’ve seen clients … cut back on spending because they were worried about big declines in income and also because there was simply less to spend money on,” said Greenwald of St. Louis Park, Minn.

The wealth disparities that exist among internists get somewhat realigned, however, when viewed through the lens of physician gender. The higher-worth segments of the specialty skew rather heavily male: 8% of male internists are worth over $5 million versus 4% of females, and 24% of men are worth $2 million to $5 million but only 15% of women, based on data from the 14% of survey respondents (n = 17,903) who practice internal medicine.

Zooming out from the world of internal medicine to the universe of all physicians shows that internists are closer to allergists and immunologists than to dermatologists when it comes to share of practitioners with net worth over $5 million. That macro view puts allergy/immunology at 2%, internal medicine at 6%, and dermatology at 28%. Meanwhile, internists’ 33% share of those worth under $500,000 is lower than family medicine’s 40% but higher than oncologists’ 16%.

Medical School and Other Debt

Continuing the comparison with all specialties, internists are doing somewhat better at paying off school loans. Among those responding to the survey, 20% are still paying off their medical school debt, closer to the low of 12% for infectious disease specialists than the high of 33% for the emergency physicians, according to the Medscape report.

Almost all internists said that they live either within (50%) or below (44%) their means, Medscape reported.

“There are certainly folks who believe that as long as they pay off their credit card each month and contribute to their 401(k) enough to get their employer match, they’re doing okay,” Greenwald said. “I would say that living within one’s means is having a 3- to 6-months emergency fund; saving at least 20% of gross income toward retirement; adequately funding 529 college accounts; and, for younger docs, paying down high-interest-rate debt at a good clip.”

This article originally appeared on MDedge.com, part of the Medscape Professional Network.