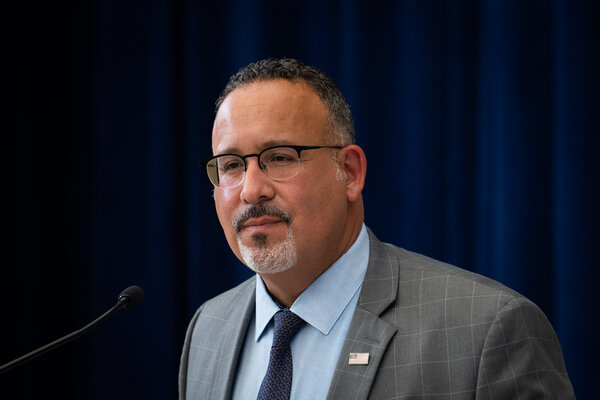 WASHINGTON — The Biden administration admonished the Republican governors of Texas and Florida on Friday for blocking local school districts from requiring masks or taking other measures to protect students from the coronavirus in the coming school year.

The secretary of education, Miguel Cardona, sent a pair of letters to the governors and their education commissioners, writing that he was concerned about recent executive actions taken by both governors.

Those orders, he wrote, prohibited districts from “voluntarily adopting science-based strategies for preventing the spread of Covid-19 that are aligned with the guidance from the Centers for Disease Control and Prevention,” like universal masking. The letters were made public late Friday.

The debate over whether local school districts should be able to require masks has become highly partisan. Republicans have cast mask rules as an infringement on parental rights, while Democrats have said they are a matter of public health.

“If you aren’t going to help, at least get out of the way,” Mr. Biden said.

In one letter released Friday, Dr. Cardona criticized Governor DeSantis for threatening this week to withhold the salaries of district superintendents or school board members who defied his order.

The education secretary noted that the American Rescue Plan Act passed by Congress allocated more than $7 billion to the state for safety measures. None of the money has been made available to local districts, Dr. Cardona wrote, and it could be used to pay the salaries of school officials.

“In fact, it appears that Florida has prioritized threatening to withhold state funds from school districts that are working to reopen schools safely rather than protecting students and educators and getting school districts the federal pandemic recovery funds to which they are entitled,” Dr. Cardona wrote.

Dr. Cardona said Governor Abbott’s order “may infringe upon a school district’s authority to adopt policies to protect students and educators as they develop their safe return to in-person instruction plans required by federal law.”

The offices of Governor DeSantis and Governor Abbott did not immediately respond to a request for comment.

He suggested that the state’s actions might imperil its federal relief funding. The policies, he wrote, appeared to “restrict the development of local health and safety policies and are at odds with the school district planning process,” which are required under the Education Department’s rules for receiving the relief funding.

Dr. Cardona said his department’s rules emphasize that districts have discretion over how to use their funding, and that contact tracing, indoor masking policies, and other C.D.C recommendations are permitted and encouraged.

Dr. Cardona added that the Biden administration would “continue to closely review and monitor” whether both states were meeting requirements under federal funding laws.

Dr. Cardona also expressed support for districts in both states that have defied the governors’ orders.

“The Department stands with these dedicated educators who are working to safely reopen schools and maintain safe in-person instruction,” he wrote.