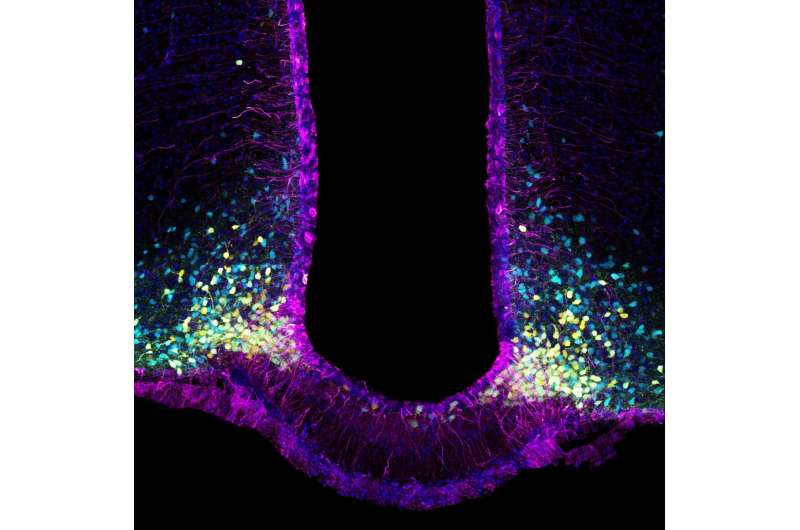 Diabetes, a disease in which blood sugar levels remain too high for too long, can lead to health complications in the long term. Type 2 diabetes (T2D) accounts for 90% of cases. Patients are usually obese or overweight, with risk factors that include sedentary lifestyle and unbalanced diet.

To increase their understanding of the disease, a team of researchers from Inserm, Université de Lille, and Lille University Hospital in the Lille Neuroscience and Cognition laboratory has for several years studied the role of leptin, a hormone involved in appetite control that sends satiety signals to the brain. In a new study published in the journal Nature Metabolism, in addition to furthering scientific knowledge of the mechanism of satiety, the scientists developed a new mouse model of diabetes that will be useful for and relevant to future research in this area.

Leptin, the satiety or appetite-suppressant hormone, is secreted by the adipose tissue at levels proportional to the body’s fat reserves and regulates appetite by controlling the feeling of fullness. It is transported to the brain by tanycytes—cells which it enters by attaching to the LepR receptors. Tanycytes are therefore leptin’s gateway to the brain, helping it to cross the blood-brain barrier and deliver satiety information to the neurons.

Previous research has revealed that such transport is impaired in subjects who are obese or overweight. This goes some way to explaining their dysfunctional appetite regulation given that it is more difficult for the information on satiety to reach the brain. In their new study, the researchers took a closer look at this transport mechanism, and more precisely the role played by the LepR receptors.

The key role of satiety hormone receptors in glucose management

In mouse models, the researchers removed the LepR receptor that is located on the surface of the tanycytes. After three months, the mice experienced a marked increase in their fat mass (which doubled over the period) as well as a loss of muscle mass (reduced by more than half). The total amount of weight gained was only fairly moderate. The scientists also regularly measured the animals’ blood sugar levels following the injection of glucose.

They found that in order to maintain blood sugar at normal levels (between 0.70 and 1.10 g/L), the mice secreted more insulin during the first four weeks of the experiment. Three months after removing the receptor, their ability to secrete insulin from the pancreas appeared to be exhausted.

Removing the LepR receptors and impairing leptin transport to the brain therefore led the mice to initially develop a pre-diabetic state. This occurs when the body releases more insulin than usual in order to control blood sugar. Then, in the longer term, the mice became unable to secrete insulin and as such unable to control their blood sugar levels. These data therefore suggest that impaired leptin transport to the brain via the LepR receptors plays a role in the development of type 2 diabetes.

In the last part of their research, the scientists reintroduced leptin to the brain and observed the immediate resumption of its pancreatic function-promoting action—particularly the ability of the pancreas to secrete insulin to regulate blood sugar. The mice quickly regained a healthy metabolism.

This study therefore elucidates the brain’s role in type 2 diabetes and also helps to further research into a disease that until then had not been considered to involve the central nervous system.