Depression During and After Pregnancy Can Be Prevented, National Panel Says. Here’s How.

As many as one in seven women experience depression during pregnancy, or in the year after giving birth, and there has never been any method scientifically recommended to prevent it.

On Tuesday a government panel of health experts reported that it had found one method that works. Some kinds of counseling can ward off perinatal depression, the panel said, and it urged it for women with certain risk factors.

The guidelines marked the first time a national health organization has recommended anything to fend off the most common complication of pregnancy, and they amounted to a public call for health providers to seek out at-risk women and guide them to treatment. The panel, the United States Preventive Services Task Force, gave its recommendation, published in the journal JAMA, a “B” rating, meaning that under the Affordable Care Act, counseling should be covered without co-payments for women.

“We really need to find these women before they get depressed,” said Karina Davidson, a task force member and senior vice president for research for Northwell Health.

“We’re so excited to be the first to have this recommendation on preventing a really devastating, prevalent disease that causes such harm to the parent, the child and the family, both psychologically and physiologically,” she continued. “All those consequences of this very very prevalent, stigmatizing disease can be averted by effective behavioral counseling.”

Perinatal depression, as it is called, is estimated to affect between 180,000 and 800,000 American mothers each year and up to 13 percent of women worldwide. Its consequences can be serious for both mothers and their babies. Perinatal depression increases a woman’s risk of becoming suicidal or harming her infant, the panel reported. It also increases the likelihood that babies will be born premature or have low birth weight, and can impair a mother’s ability to bond with or care for her child. The panel reported that children of mothers who had perinatal depression have more behavior problems, cognitive difficulties and mental illness.

The panel emphasized that perinatal depression is “should not be confused with the less severe postpartum ‘baby blues,’ which is a commonly experienced transient mood disturbance consisting of crying, irritability, fatigue, and anxiety that usually resolves within 10 days of delivery.”

The panel of independent experts, appointed by the Department of Health and Human Services, evaluated research on numerous possible prevention methods, including physical activity, education, infant sleep advice, yoga, expressive writing, omega-3 fatty acids and antidepressants. Several showed some promise, including physical activity and programs in Britain and the Netherlands involving home visits by midwives or other providers. But only counseling demonstrated enough scientific evidence of benefit. 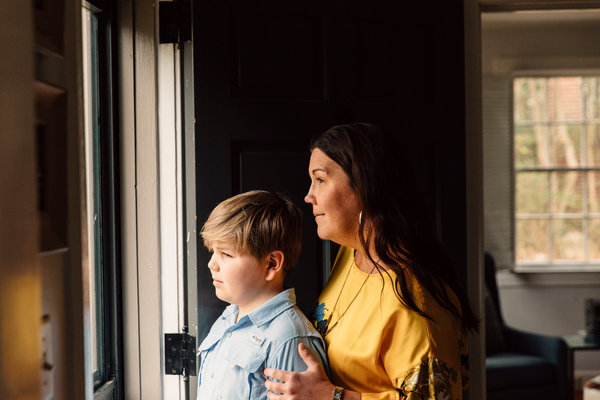 Women receiving one of two forms of counseling were 39 percent less likely than those who didn’t to develop perinatal depression. One approach involved cognitive behavioral therapy, helping women navigate their feelings and expectations to create healthy, supportive environments for their children. The other involved interpersonal therapy, including coping skills and role-playing exercises to help manage stress and relationship conflicts.

“This recommendation is really important,” said Jennifer Felder, an assistant professor of psychiatry at University of California, San Francisco, who was not on the panel. Unlike previous national guidelines, which involved screening or treatment, she noted, “this focuses on identifying women who are at risk for depression and proactively preventing its onset, using concrete guidelines.”

The panel recommended counseling for women with one or more of a broad range of risk factors, including a personal or family history of depression; recent stresses like divorce or economic strain; traumatic experiences like domestic violence; or depressive symptoms that don’t constitute a full-blown diagnosis. Others include being a single mother, a teenager, low-income, lacking a high school diploma, or having an unplanned or unwanted pregnancy, panel members said.

The panel highlighted two specific programs, which were similarly successful, Dr. Davidson said. They counsel first-time mothers and those who already have children, are available in Spanish and focus on low-income women, about 30 percent of whom develop perinatal depression, experts say.

“It’s really meant to break down this idea that talking about your thoughts and behaviors is scary,” said Darius Tandon, an associate professor at Northwestern University’s Feinberg School of Medicine and principal investigator of several “Mothers and Babies” studies.

So far, health and human service agencies in over 175 counties in 21 states have been trained to implement the program. And it is being evaluated in Florida and the Midwest to see if it works when administered one-on-one by home visiting caseworkers instead of groups run by psychologists or social workers, Dr. Tandon said.

The other program, “Reach Out, Stay Strong, Essentials for New Moms” or ROSE, typically delivered in four sessions during pregnancy and one postpartum, can be administered in groups or one-on-one by nurses, midwives or anyone trained to follow the manual, said Jennifer Johnson, a professor of public health at Michigan State University.

So far, women in Rhode Island, Mississippi and Japan have participated, said ROSE’s creator, Caron Zlotnick, a professor of psychiatry and human behavior at Brown University. She and Dr. Johnson are testing its expansion to 90 clinics throughout the country.

“We’re trying to buffer people and prepare them for things that are really difficult,” Dr. Johnson said.

Karla Manica, 30, a single mother of four in Detroit, participated in “Mothers and Babies” when pregnant with her youngest, who is now 1. She said she experienced abuse as a child and in relationships, attempted suicide by drinking cleaner, lived in homeless shelters after being laid off from her job as a dementia caregiver, and has had bipolar depression.

“It was good to come to the table and share,” Ms. Manica said. The counselor texted uplifting messages between sessions, and “homework assignments” to engage in stress-relieving activities were useful. When Ms. Manica learned her baby’s father had another girlfriend, she said, the group “gave me hope.”

After her daughter Kathryn was born, “I was well,” Ms. Manica said. “If I hadn’t got with the Mothers and Babies, would I have been prepared, would I have gotten the confidence I have now? No.”

Experts and leaders of the programs, whose curriculums and counselor training are free, said financial and other obstacles exist.

“Cost is definitely still an issue,” said Dr. Tandon. He said one prenatal session costs clinics delivering the counseling $40 to $50 to provide mothers’ transportation and child care, and Medicaid doesn’t have a reimbursement code for preventive counseling, so clinics often absorb the cost of staff time to provide it.

Access to counseling also can be difficult. “Especially when you’re pregnant and you have competing demands on your time and energy, or if you have a little one at home,” said Dr. Felder, who wrote an editorial about the recommendation. Offering it online or through apps may help.

In addition, obstetricians and general practitioners are often uncomfortable broaching mental health with patients. “It’s this reaction of: ‘This is not my area of specialty. I don’t want to open Pandora’s box if I don’t feel like I have the resources to provide if someone does report something that shows they are at risk for depression,’” Dr. Felder said. Dr. Felder, who just gave birth herself, said: “I was asked about my mental health once during a prenatal care appointment and once before being discharged from the hospital. Both times it was yes-or-no question that didn’t really allow room for discussion, asked as part of a checklist with no eye contact.”

Even in some cases in which it doesn’t prevent depression, counseling may be beneficial, said Dr. Melissa Simon, a task force member and vice chairwoman of research at Northwestern’s Feinberg School of Medicine’s obstetrics and gynecology department. “It provides the pregnant person with education and coping strategies,” she said, and can help those who develop depression “get referred and embedded into treatment more effectively and efficiently.”

Captoria Porter, 28, of Bolingbrook, Ill., who has seven children, ages 2 months to 11, experienced no depression during or after her first five pregnancies. But during her sixth, life became more tumultuous, with marital problems and the need to move in with her sister because the housing project where she was living was closing.

After the birth of Myla, now 1, “I think I had symptoms of depression,” said Ms. Porter, who has worked as a telemarketer selling sanitizer dispensers. “I was really sad. I didn’t want any company.”

Fortunately, the pre-birth “Mothers and Babies” sessions helped her recognize signs like “you don’t want to brush your hair or you don’t want to be bothered with the baby,” she said. “I would find myself feeling that way.”

Ms. Porter met twice with a community center counselor, but realized the program had already taught her the practices he recommended: “Reaching out to family and friends. Learning that I can’t control everything. Eating when the baby eats, sleeping when the baby sleeps, laying the kids down for a nap and calling it ‘me time.’”

That warded off full-blown depression. “I caught it early,” she said.

The panel noted there is currently no screening tool to identify women at risk and urged experts to develop one. Research on genetic underpinnings of the condition may eventually help with screening.

The panel encouraged more research on all prevention approaches. In reviewing 50 studies of various methods, it found negative effects only in the two small studies with antidepressants. One study reported instances of dizziness and drowsiness among women who took Zoloft. The other reported that more women taking Pamelor experienced constipation.

“Some people have asked, ‘Why aren’t you just recommending antidepressants?’” Dr. Davidson said. “Of course, antidepressants were developed and studied for someone who has depression. We need to consider possible benefits and possible harms to parent and fetus when someone is not depressed and you’re giving them a drug to treat depression on the off-chance it prevents depression.”

Beth Sanfratel, 43, a preschool teacher in Birmingham, Ala., said she wished she’d had a counseling program when pregnant with the second of three sons, Mac, now 10.

“I don’t even think postpartum depression was mentioned,” she said. Several months after Mac was born, Ms. Sanfratel, usually upbeat and social, began having “crying spells and not really wanting to engage,” she said. “I was having trouble getting up and in general just being really bummed out.”

Depression also caused “a lot of guilt,” she said. “You feel you should be lucky to be a new mom and have a new baby.”

Ultimately, Ms. Sanfratel, a former social worker, recognized she needed help and took antidepressants for about a year, resuming them shortly before her third son, Beau, was born in 2011.

“Getting moms figuring out what’s going on ahead of the actual delivery, it’s a great, great thing,” she said.